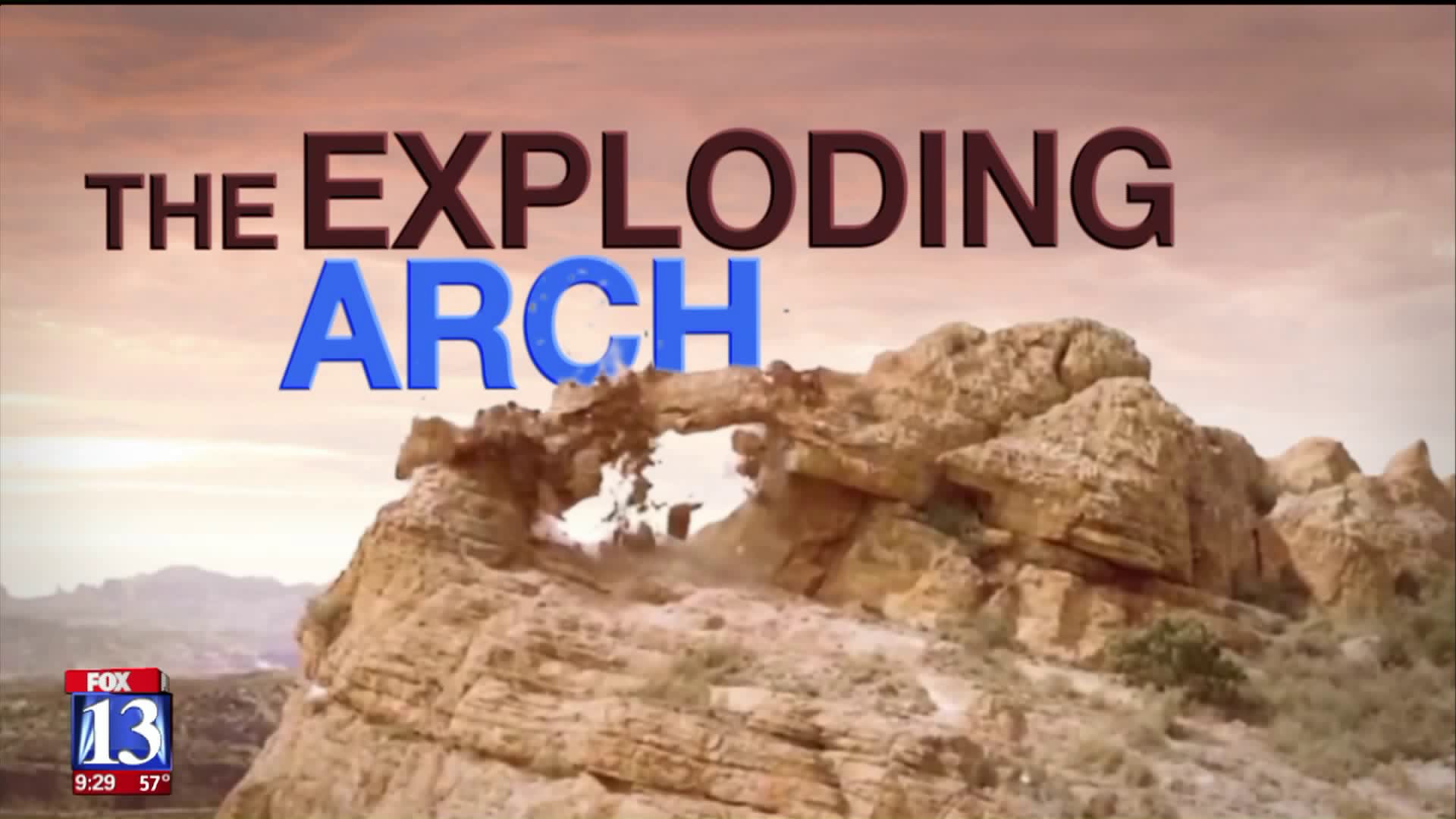 People watched, wondered where these videos came from. We even did a news story analyzing their authenticity. Special effects experts and a government investigation quickly concluded it wasn`t an arch in Utah, and instead a hoax. For the first time, A German artist is showing new, behind-the-scenes pictures and videos, and explaining what went into the creation of controversial, viral videos that show the explosion of rock formations. 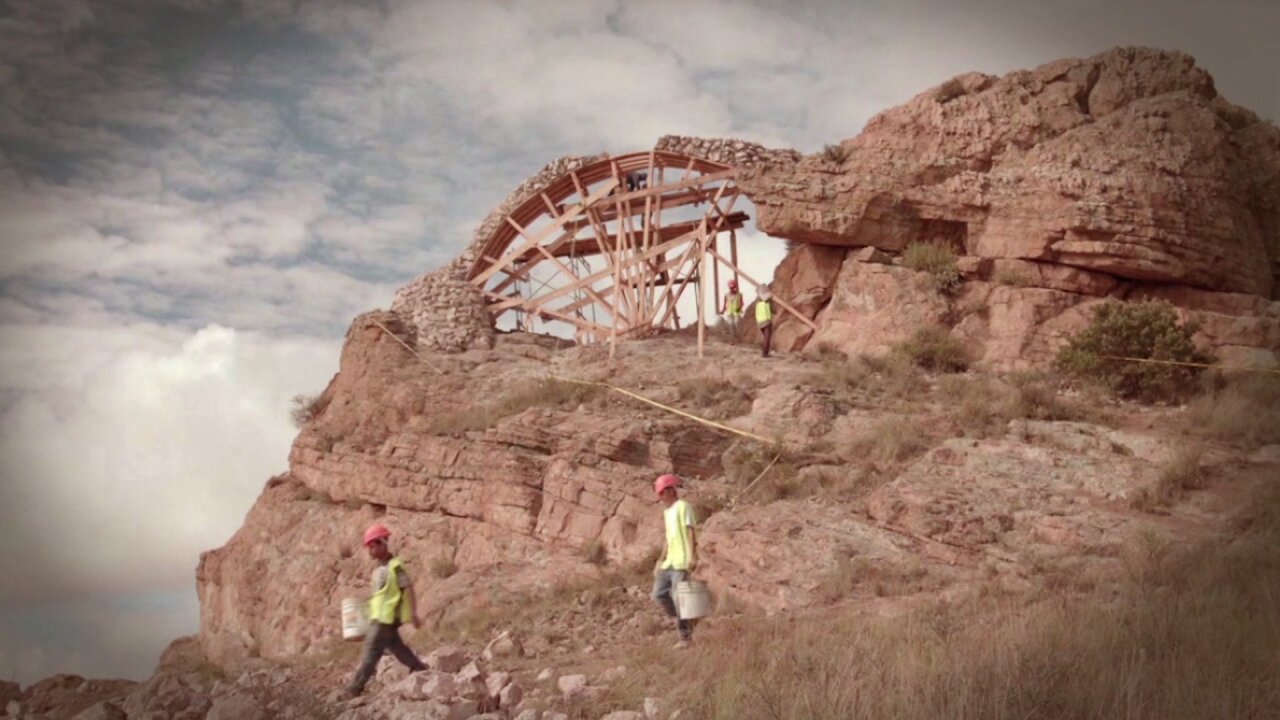 A German artist is showing new, behind-the-scenes pictures and videos, and explaining what went into the creation of controversial, viral videos that show the explosion of rock formations.

The videos popped up online in December and led to widespread public speculation, skepticism and even a state government investigation.

News stations and the Utah Department of Natural Resources analyzed the authenticity of the videos, in which an arch and two hoodoos are seen exploding.

DNR determined the videos weren’t real and many who watched the videos seemed to come to a consensus that they were likely digitally altered.

But they were wrong.

“The experts said, ‘Probably it’s a digital fake,’ which it’s not. We actually really did this, in real life,” explained Julius von Bismarck, one of the two artists behind the exploding rock formation videos.

Videos he provided to FOX 13 show the two-month process of building fake rock to blow up for an art project.

Von Bismarck said he and fellow Berlin artist Julian Charrière work a lot with nature, the image of nature and how it’s constructed through media.

They began to explore what it means to destroy ancient monuments, and how people react when monuments are attacked — including natural monuments.

“What way of seeing the world is connected to natural monuments? How they are, for example, in the national parks in Utah? Because they are very monumental,” von Bismarck said.

He asked the question of why people are so interested in these monuments, to the point that they travel to see them and national parks are organized to protect them.

Von Bismarck and Charrière decided to recreate rock formations like what someone would find in Utah.

“We never thought about destroying anything that is there already, because we ourselves enjoy a lot that these things that exist,” he said.

Part one of the art project consisted of the building process, and von Bismarck said they spent time in Mexico finding locations to build.

They chose a spot not immune to explosions.

“It’s a mining area where we did it,” von Bismarck explained. “And there, a lot of mountains get moved around in order to dig out what’s underneath.”

According to the artist, a crew of around 30 people, including architects and engineers, spent more than two months designing and building the monuments.

The viral videos show an arch and two hoodoos exploding, but von Bismarck said they actually built five rock formations — two arches, a set of two hoodoos, one hoodoo and one column.

A 25-minute art installation video shows the building process, from inside industrial rooms where crew members fabricated the fake formations, to outside in the field where they erected the man made monuments.

Von Bismarck said they tried to keep the impact on the land as little as possible, so they brought most of the materials in by hand. The installation video shows bucket brigades with rocks and cement, workers standing on wooden scaffolding to mold the sculptures, and people painting plaster to make it look real.

After the first part of the art project finished, they prepared for part two—the explosions.

Von Bismarck said an explosive company that normally does detonation in mines, stuck dynamite inside the structures.

“Everyone was just kind of looking forward to this moment,” he said.

That moment, when the built-from-scratch structures blew up.

It was that moment, that would propel the art project into a different kind of explosion online.

“I’m like, ‘Oh my God, this was not meant to actually go that far,’” von Bismarck said, of the arch and hoodoos videos going viral.

The third part of the art project was to use social media to see how people reacted, but von Bismarck said it took off much more than they thought it would.

“We didn't really expect that TV is going to pick up on it, and even the authorities,” von Bismarck said. “That was not our goal.”

He said he can understand that people and agencies were upset because of the time spent to clarify the video.

Von Bismarck said there are a lot of emotions attached to these kinds of monuments.

“I’m also emotionally attached to it, so I totally understand that,” he said. “And I hope that no one really actually got too angry about it.”

The online arguments over the validity of the videos, and the coverage in the news, became part of the art project that von Bismarck and Charrière exhibited in Düsseldorf, Germany.

They showed news clips, as well as their 25-minute building process video, and they displayed pictures of the explosions.

After von Bismarck and Charrière revealed themselves as the artists behind the videos, the Department of Natural Resources sent a statement to FOX 13.

“We are not going to comment further on the videos other than to say it appears the goal of these individuals was to mislead the public; and in the process they wasted valuable resources,” the DNR statement said. “That’s unfortunate and doesn’t warrant further comment.”

While the state still isn’t happy about the videos, von Bismarck indicated that the videos brought up the importance of being aware and questioning what we see online.