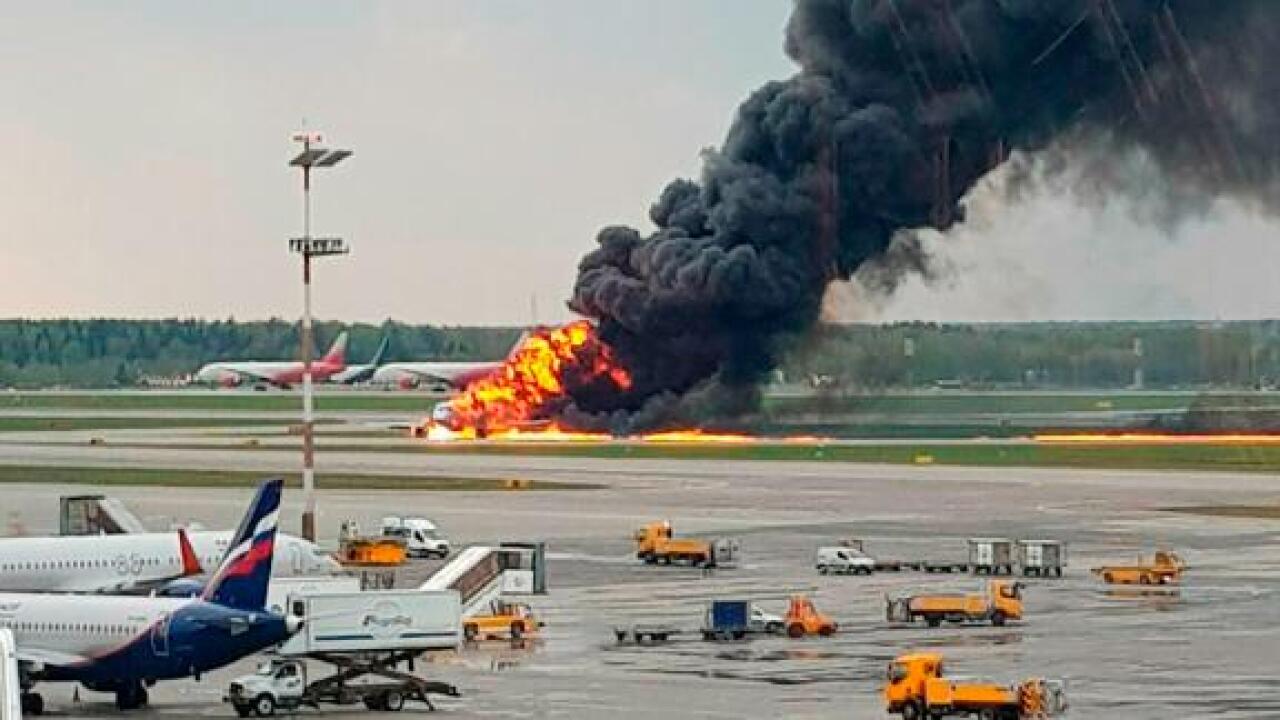 At least 41 people on board a Russian passenger jet were killed, including two children, after the aircraft crash-landed at a Moscow airport on Sunday, bursting into flames on impact.

Once the plane had come to a halt, passengers escaped using emergency slides from the plane’s two forward doors, before running away from the burning aircraft.

Initial reports said the Superjet 100 was flying from Moscow to Murmansk, a Russian city in the Arctic circle, when an emergency on board forced it to turn back.

Russia’s Interfax news agency reported that a “loss of communication” caused by a “lightning strike” had led to the decision to return to Sheremetyevo. No official cause has yet been provided for the disaster.

Data from flight tracker Flightradar24 shows the plane took off just after 6 p.m. local time (11 a.m. ET) and was in the air for just under 30 minutes, before making a loop in the skies north of Moscow and heading back to the airport.

A total of 78 people were aboard the stricken flight, including five crew members. Thirty-seven people survived, five of whom are currently receiving treatment in hospital, said Elena Markovskaya, a spokeswoman for Russia’s Investigative Committee, a top law-enforcement agency.

An American citizen was killed in the crash, Interfax reported.

A passenger in a plane waiting to depart Moscow posted video on Instagram purportedly showing fire crews attending the scene as the aircraft sat in flames on the runway.

Russian airline Aeroflot published an “incomplete” list of 33 survivors, including the names of the five passengers hospitalized. In a series of short statements on its website, it said the aircraft was evacuated in 55 seconds, compared with the “industry norm” of 90 seconds.

The flight crew “did everything in its power to save passenger lives and provide emergency assistance to those involved,” another short release said. “Tragically, they were unable to save all of those aboard.”

The captain was the last to leave the burning aircraft, the airline added, and offered its condolences to the passengers and their families. It announced that it would fly relatives of those affected to Moscow without charge.

Sukhoi manufactures military aircraft and is known especially for its fighter jets. Its civilian aircraft, the Sukhoi Superjet 100, is the first post-Soviet commercial airliner to have been designed and built in Russia.

The Superjet is a relatively new aircraft, making its maiden flight in 2008 before entering service in mid-2011. More than 100 planes are in operation around the world, according to the company.

The narrow-bodied, dual-class cabin aircraft can transport 100 passengers over regional routes and is “a fusion of Russia’s famed aviation design and production skills with the latest systems from leading aerospace suppliers around the world,” the aircraft’s brochure says.

In 2012 a demonstration flight over Indonesia crashed in a remote, mountainous part of the country.

Earlier that year, a Superjet 100 operated by Aeroflot was forced to abandon its flight to Astrakhan, Russia and return to Moscow because of problems with the undercarriage, according to RIA Novosti.

A similar defect in another Aeroflot-operated Superjet 100 had to be fixed in Minsk the previous year.

The model achieved the European Aviation Safety Agency (EASA) Type Certificate in 2012, and also holds safety certificates from a number of other aviation authorities.

“All instructions have been given to conduct the most thorough investigation, (to carry out) the necessary orders to find out the cause of this accident,” said Peskov, according to TASS.

He added that Putin “extends his deep condolences to those who lost their near and dear in this incident.”

The Investigative Committee said in a statement Monday that it was examining “various versions” that might have caused the crash landing, including the qualifications of the pilots, air-traffic controllers and maintenance personnel, aircraft malfunction and adverse weather conditions.

The committee routinely conducts investigations into major incidents with loss of life.