Ex-NFL signee sentenced for murdering his wife in Park City 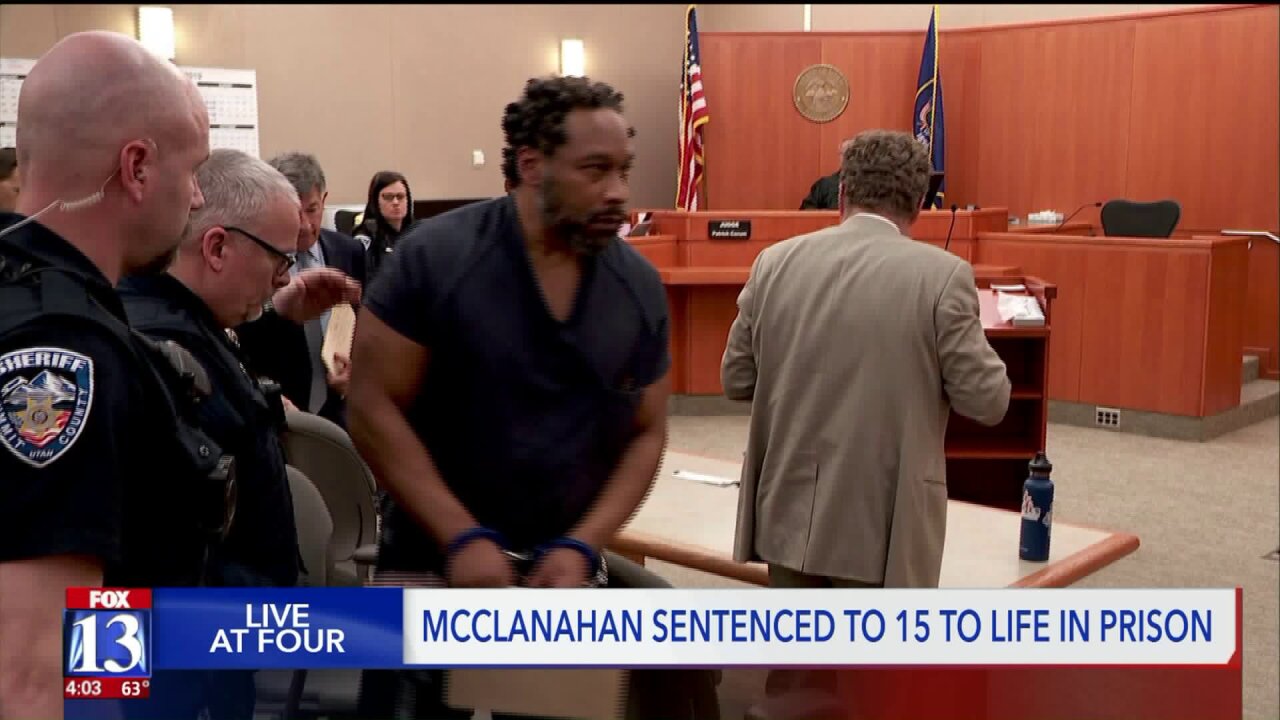 PARK CITY, Utah — A former professional football player was given his sentence Monday for the November 2017 murder of his wife in Park City.

Anthony Darnel McClanahan, 47, will spend 15 years to life in prison for the death of 28-year-old Keri Colleen McClanahan.

Anthony McClanahan’s guilty plea last month was part of a plea bargain. Prosecutors agreed to remove a domestic violence designation and an enhanced penalty for the use of a dangerous weapon. Prosecutors also agreed to drop a child kidnapping case against him 30 days after his sentencing.

Keri McClanahan was found dead at the Park Regency Resort in Park City on November 2, 2017.

After hearing the sentence McClanahan received, Heather Gauf said it won't bring her sister back.

"Before she passed away her plan was to join the service and help people," Gauf said. "She had two amazing, beautiful children who loved her very much and she was an amazing mother."

After listening to Keri's siblings speak, McClanahan read a letter saying he loved "K.C." very much and asked for forgiveness.

"I believe in my heart that Anthony was very remorseful," defense attorney, John Johnson said. "Not much you can do for sentencing for life."

In delivering the sentence, Judge Patrick Corum said he didn’t believe for a minute that McClanahan was remorseful and that he believes McClanahan will spend the rest of his life in prison.

According to a court document, Anthony McClanahan flagged down a Park City officer and said he, his wife and baby had been attacked by two or three men, “but did not give his wife’s name or location, even when asked multiple times.” Police said Anthony had cuts on his face, neck, wrist, arms and torso when he spoke with the officer, and he was taken to a hospital for treatment.

Meanwhile, an “unrelated occupant” of the Park Regency condominiums reported someone matching Anthony’s description had been “army crawling” through the second and third-floor corridors of the complex and calling for help.

Police searched the complex and found blood on the floor and door, which had been left open, of one of the condominiums.

Officers entered the unit and found Keri McClanahan’s body covered in blood. She had suffered defensive wounds and multiple cuts on her neck. Police found a paracord bracelet knife at the scene, and an autopsy revealed Keri’s wounds were consistent with that knife. Her death was ruled a homicide.

A telephone witness told police she had been on the phone with Anthony McClanahan on the night of November 1, 2017. During that phone call, the witness told Anthony she suspected Keri had been texting her husband, a statement of probable cause said. The witness said she then overheard Anthony confront Keri, according to police.

According to The Salt Lake Tribune, McClanahan signed with the Dallas Cowboys in the 1990s, and there is no record he ever played a game with the NFL before the Cowboys released him from the team.