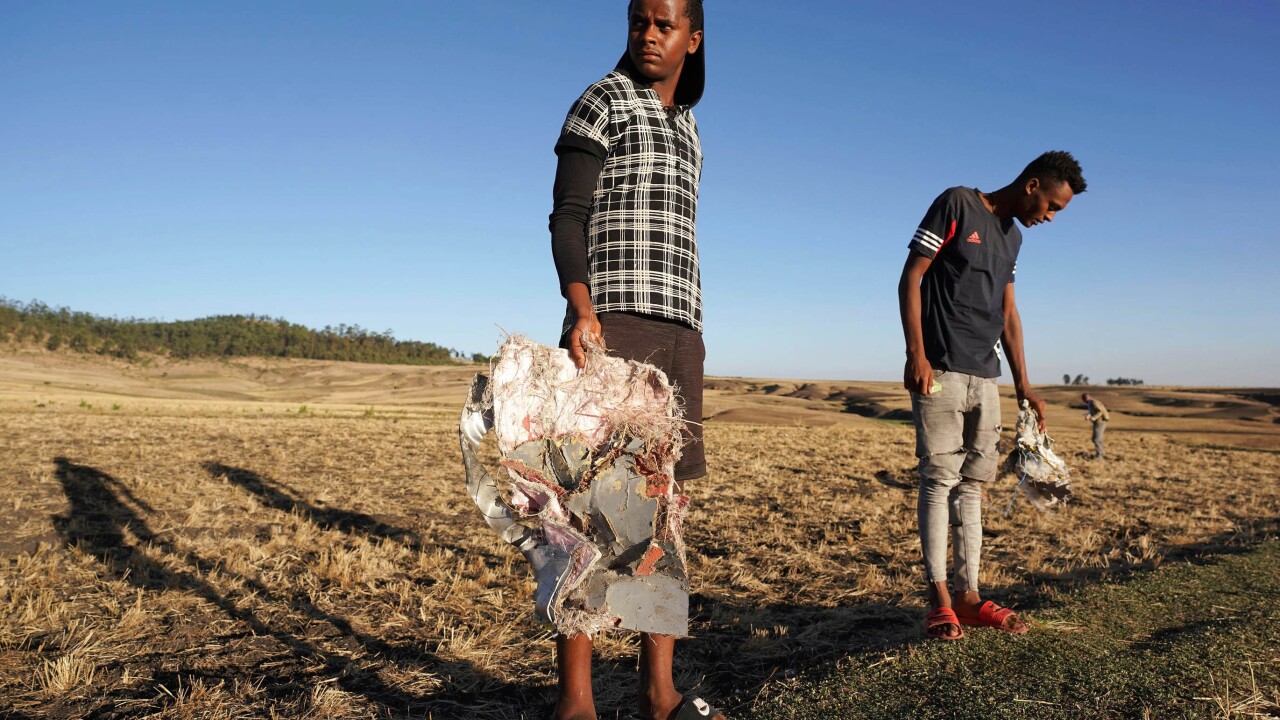 ADDIS ABABA, ETHIOPIA – MARCH 10: Local residents collect debris at the scene where Ethiopian Airlines Flight 302 crashed in a wheat field just outside the town of Bishoftu, 62 kilometers southeast of Addis Ababa on March 10, 2019 in Addis Ababa, Ethiopia. Flight 302 was just 6 minutes into its flight to Nairobi, Kenya, when it crashed killing all 157 passengers and crew on board. The cause of the crash has not yet been determined. (Photo by Jemal Countess/Getty […]

Pilots flying Ethiopian Airlines Flight 302 repeatedly performed all of the aircraft manufacturer’s procedures, but could not control the Boeing 737 Max 8 before it crashed, killing all 157 people aboard, Ethiopian officials said Thursday.

The findings, part of a preliminary report on the tragedy by the Ethiopian Transport Ministry, do not attribute blame for last month’s crash but are likely to pile pressure on Boeing.

The disaster was the second such crash of a Max 8 jet in less than six months, and raised fears about the model’s automated software, prompting the worldwide grounding of all similar planes currently in service.

The report says the Boeing 737 Max 8 had normal certification and the crew was certified for flying this aircraft and had the necessary training, officials said.

“Repetitive and commanded aircraft nose-down conditions are noticed in this preliminary investigation,” Ethiopian Minister of Transport Dagmawit Moges told reporters during a news conference in Addis Ababa. “It is recommended that the aircraft flight control system relative to the flight controllability shall be reviewed (by Boeing).”

She also said her agency will recommend that aviation authorities verify that Boeing has “adequately addressed” flight control issues “before release of the aircraft to operations.”

While Ethiopian investigators announced the findings of the preliminary report, they have yet to publish the report itself, a move described by CNN anchor and aviation expert Richard Quest as “unusual.”

“We are slightly taking their word for what they are saying is in the report,” Quest said.

On Thursday, Boeing spokesman Peter Pedraza said: “Boeing will be reviewing the published report as it is released.” The Ethiopian Accident Investigation Bureau told CNN it had given the report to Boeing on Monday.

The new 737 Max 8 jet crashed shortly after takeoff from the Ethiopian capital on March 10. The pilot had reported technical difficulties after takeoff and asked for clearance to return to Addis Ababa.

In October, all 189 people on board Lion Air Flight 610 were killed when the flight went down shortly after takeoff from Jakarta.

It’s not yet known if the two crashes are linked, but suspicion has grown over MCAS, and sparked US investigations into the certification process at Boeing.

The release of the report is based on wreckage retrieved from the crash site, including the jet’s flight data recorder and cockpit voice recorder, which were taken to Paris for analysis.

However, experts have criticized the detail contained in the initial findings.

“The paucity in this report is appalling,” said CNN aviation analyst Alastair Rosenschein. “I’ve never seen so little information in a report.”

Fallout from the tragedies has also disrupted the air travel industry. Air travelers have been forced to reschedule canceled flights and airlines are losing money while their new planes remain parked on the ground until further notice.

What is MCAS and why is it important?

The design of the 737 Max is based on a previous version of Boeing’s best-selling 737 model — with the addition of newly designed engines. These engines are more fuel efficient than previous 737s, but they’re larger, which changed the aerodynamics of the overall aircraft, giving the jet a tendency to point slightly upward.

The MCAS system is intended to compensate for this by overriding the pilot and forcing the plane’s nose down, if data from an “angle of attack” (AOA) — sensor indicates the jet’s nose is too high.

If the nose is pointing too high the aircraft is in danger of stalling and possibly crashing.

Boeing is currently developing a software fix for MCAS that it says will add inputs from a second AOA sensor and an indicator light that will alert pilots when something is wrong.

On Thursday, Ethiopian accident investigators said they have not identified any damage to the aircraft’s sensors that could have contributed to the crash.

He also said investigators have not identified any “structural design problem” with the aircraft.

Although Boeing is developing a fix to its MCAS software, the US Federal Aviation Administration (FAA) has expressed confidence in MCAS.

Boeing said last week it was working with airlines and regulators to “restore faith in our industry” and “to reaffirm our commitment to safety and to earning the trust of the flying public.”

Typically, a preliminary report from air crash investigators doesn’t seek to find fault. Its purpose is to offer an early glimpse of what happened — without providing any conclusions to a possible cause. A final investigation report typically isn’t expected until up to a year after the crash.

The FAA grounded all 737 Max 8s and Max 9s in the US on March 13, after aviation regulators in other nations around the world had already done the same. The FAA grounded the jets citing satellite tracking data that showed similarities between the Lion Air and Ethiopian crashes.

The world’s largest carrier, American Airlines, which owns 24 737 Max 8s, said it plans to cancel about 90 flights per day through April 24 due to the grounding.

Europe’s largest tour company — Germany’s TUI — said it expects the grounding will cost it at least $225 million. TUI has 15 737 Max jets, and was expecting another eight to be delivered by the end of May.
China, the first country to ground the Max 8, has one of the world’s largest fleets, with 97 Max 8s in operation, according to Chinese state-run media.