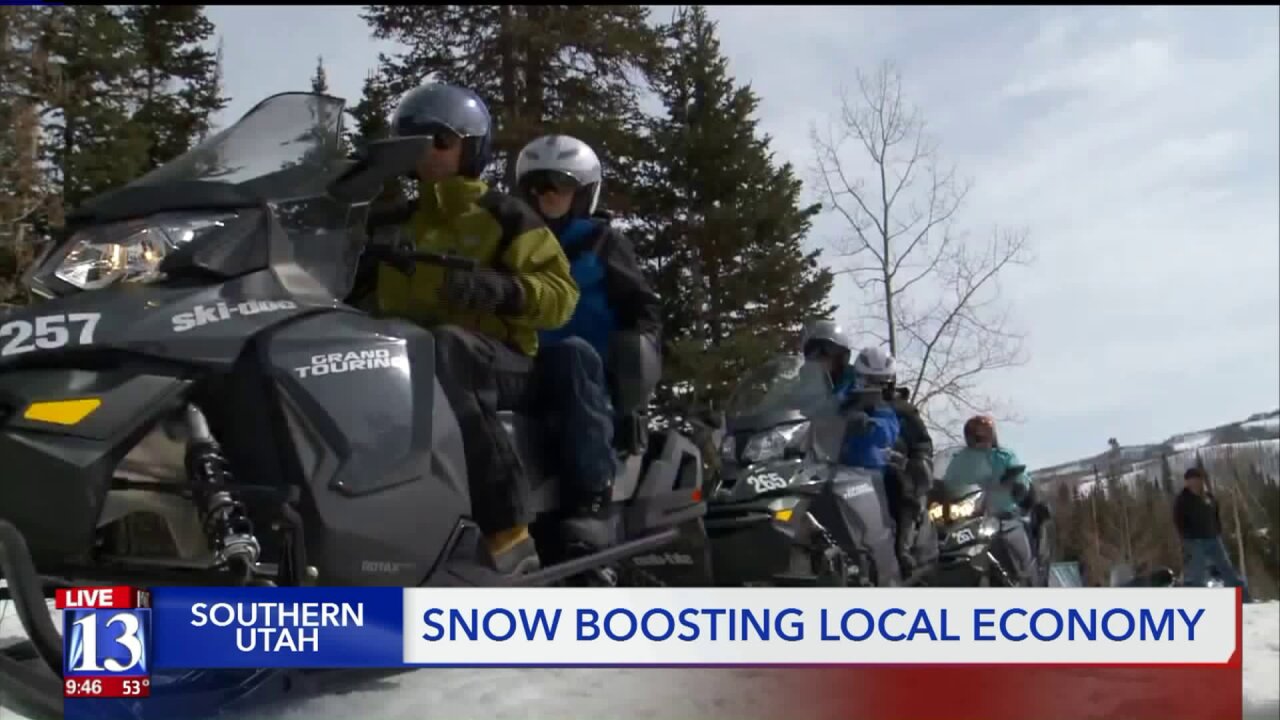 BRIAN HEAD, Utah — A local economy that relies heavily on winter weather is thriving thanks to an active winter.

“This is a godsend,” said Kelly Oldroyd who owns Thunder Mountain Motorsports. “I’m not complaining. We had a lot and a lot of snow means a lot of work.”

Oldroyd’s business takes guests on tours via snowmobile to view some of southern Utah’s most scenic areas. However, the recent drought took away many of his customers.

“Last year, it was practically nonexistent,” Oldroyd said. “We had a really, really short season.”

In recent years, there just wasn’t much snow to attract people to the mountain.

When asked how many customers he averaged each day a year ago, Oldroyd laughed as he said, “Oh, five, ten. Not very many.”

But this year, thanks to a deep snowpack, the customers are coming back in droves.

The Brian Head Ski Resort is also reaping the benefits of a winter with a seemingly endless supply of snow.

“We are setting records this year,” said Trace Whitelaw, a spokesperson for the resort. “We are on track for this to be our busiest season of all time.”

Whitelaw cited the resort’s affordability as another reason for attracting customers. But he believes there is no doubt skiers have been attracted by the fresh supply of powder.

“It seems like every week we have snow falling, the base keeps building and building,” Whitelaw said. “Honestly, I’ve been skiing up here my whole life, and 2019 is unlike any winter I’ve ever had in Brian Head.”

This winter has been a long time coming for local business.

“I haven’t seen snow like this since 2005,” Oldroyd said. “We are seeing numbers that we’ve never seen, that we never dreamed of seeing.”

Only time will tell if this type of active winter becomes the new normal in southern Utah. Oldroyd and others have seen enough of the drought and they hope it doesn’t come back.

“It could be coming back into a pattern. We get the same kind of winter for a year or two more,” Oldroyd said. “I hope.”