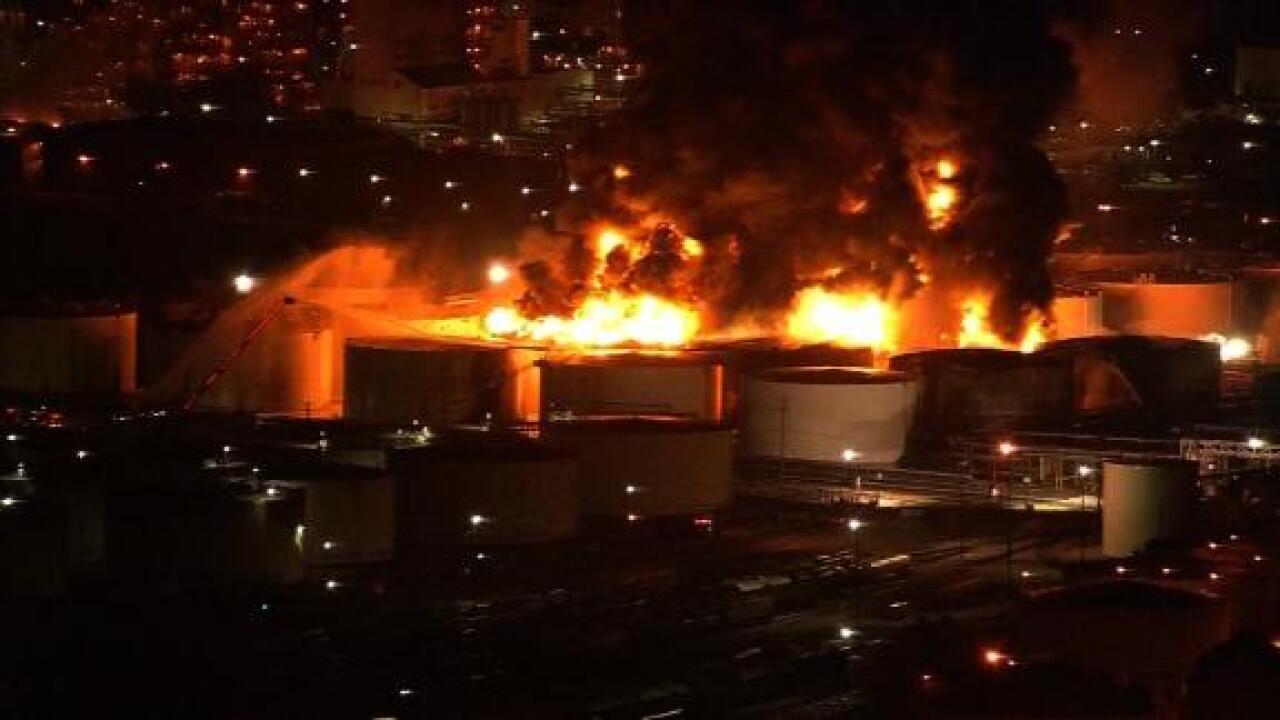 A fire burning overnight at a chemical storage facility in suburban Houston shut down schools and a state highway as the blaze spread to eight tanks containing gas, oil and chemicals, officials said Monday.

All International Terminal Company employees are accounted for, and no injuries have been reported, the company said.

Authorities reopened Highway 225 early Monday and lifted a shelter-in-place order for residents of Deer Park, the city’s Office of Emergency Management said. Previously, residents had been told to stay inside with their windows closed and central cooling or heating units turned off.

“As of 5:30AM, the City of Deer Park has received confirmation that no air quality readings conducted in response to the Intercontinental Terminals Company (ITC) incident have exceeded action levels,” a city statement said.

Low levels of “particulate matter” were detected early Monday, the company said, and “a single, volatile organic compound detection has been found 6 miles southwest of the facility. These readings are currently well below hazardous levels.”

ITC reported the fire began in a single tank late Sunday afternoon and spread to a second tank later Sunday. Alice Richardson, a company spokeswoman, told reporters that firefighters were using foam in their efforts to douse the blaze and they were hoping that once the fire was contained, they could close the tank valves and the fire would put itself out.

By early Monday morning, seven of the Deer Park facility’s 242 tanks were involved in the fire, and the blaze spread to an eighth tank before 5:30 a.m., the company said.

“Although the risk of explosion is minimal, we continue to take precautions to further reduce this possibility,” the company said.

Xylene is a solvent that occurs naturally in petroleum, and swallowing or breathing the substance can cause death, while nonlethal exposure can cause eye, nose, throat and skin irritation, among other maladies, according to the National Library of Medicine.

Naphtha is a petroleum product resulting from the distillation of natural gas or crude oil, the library says. It can be an eye and nasal irritant. Toluene occurs naturally in crude oil and is used as a gasoline additive, “and damage to the central nervous system is the main concern following exposure to toluene in the air,” the library says.

ITC describes naphtha and xylene as “components in gasoline.” Toluene, it said, is used in the production of nail polish remover, glue and paint thinner.

Gov. Greg Abbott said state officials are monitoring the situation, and his office had “ordered that all state resources be made available to local and industry officials and urge residents to continue heeding the warnings of local officials.”

According to ITC, the Deer Park terminal opened in 1972 and has capacity for 2.2 million cubic meters — more than a half billion gallons — of storage for “all kinds of petrochemical liquids and gases, as well as fuel oil, bunker oil and distillates.” The facility has ship and barge docks, rail and truck access and pipeline connections.