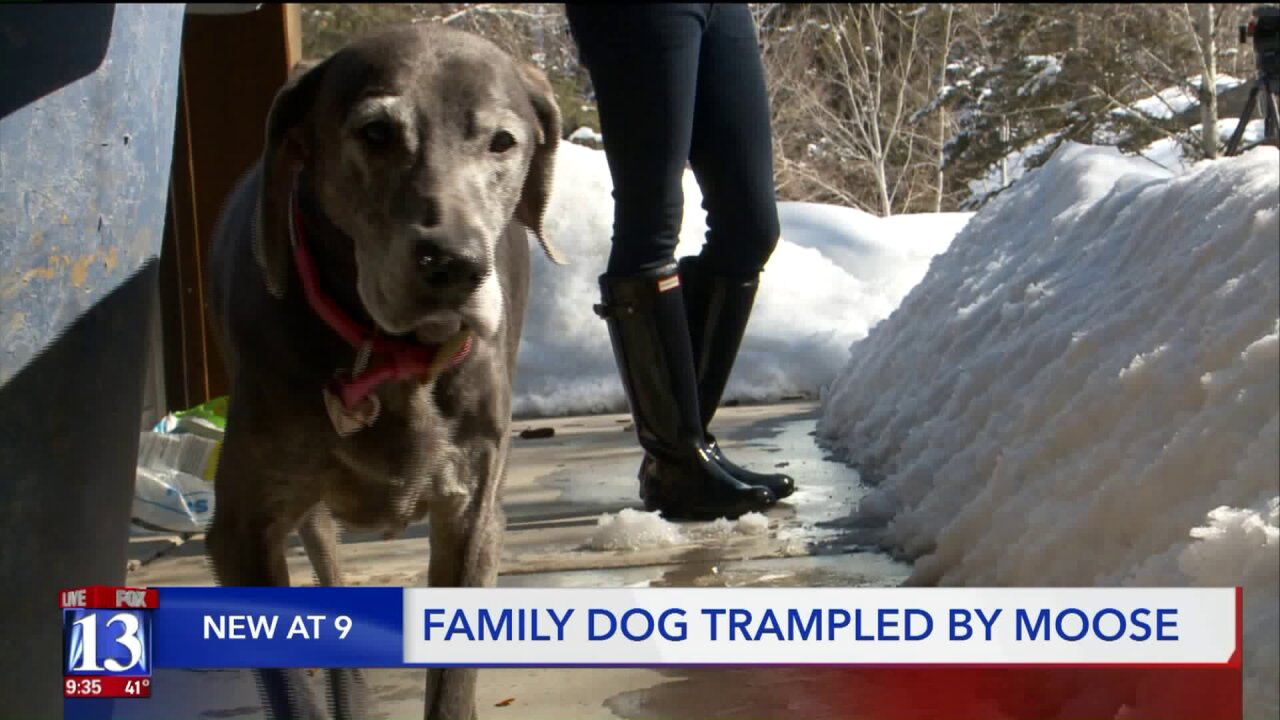 PARK CITY, Utah — A Park City family's dog is recovering after a moose trampled her in a driveway.

Now, the owners are sharing their story in hopes it doesn't happen to anyone else.

For the Francese family, seeing wildlife in Park City is what they love about living there. They don't want to force the animals away, but they are asking people to be extra cautious after a dangerous run-in with a moose.

Pippa is a 13-year-old Weimaraner that Francese rescued from a shelter. But recently Pippa was in a dangerous situation that Francese couldn't rescue her from. It was last week when a bull moose showed up in Francese's front yard.

“We were just watching it outside the window. My son thought it was pretty exciting,” Francese said.

They watched the moose graze for several minutes.

“Then, all of the sudden, he was gone,” Francese said.

Little did Francese know the moose settled down in her driveway. Her security camera shows the huge animal lying between her truck and a mound of snow. But the cameras didn't catch what happened next, when Francese went out of the garage and her dogs followed. She suddenly heard both dogs barking.

“I was startled. I thought 'what in the world are they are barking at?' It wouldn't be a dog and it certainly wouldn't be a person,” Francese said.

She looked over to see the moose attacking.

“He got Pippa, my older dog, on the ground and started stomping on her. I was just screaming, trying to get my dogs to come to me,” Francese said. “It felt like she was down on the ground forever.”

Finally, Pippa escaped and ran out of sight.

“I didn't know if she was dead or dying or what,” Francese said.

Pippa made it to the front of the house with the moose still not far behind her.

She took her to the vet and, luckily, Pippa didn’t have any broken bones or internal injuries, but she was very sore. Pippa also wouldn’t eat for days, but now she seems back to normal. Now, Francese can’t stop thinking about the "what-ifs."

“If this helps one family to avoid an incident like this, then I’m happy to share the story,” Francese said.

Here in Utah, we've heard cases recently of people driving right up next to a moose or even feeding them.

If You Encounter A Moose