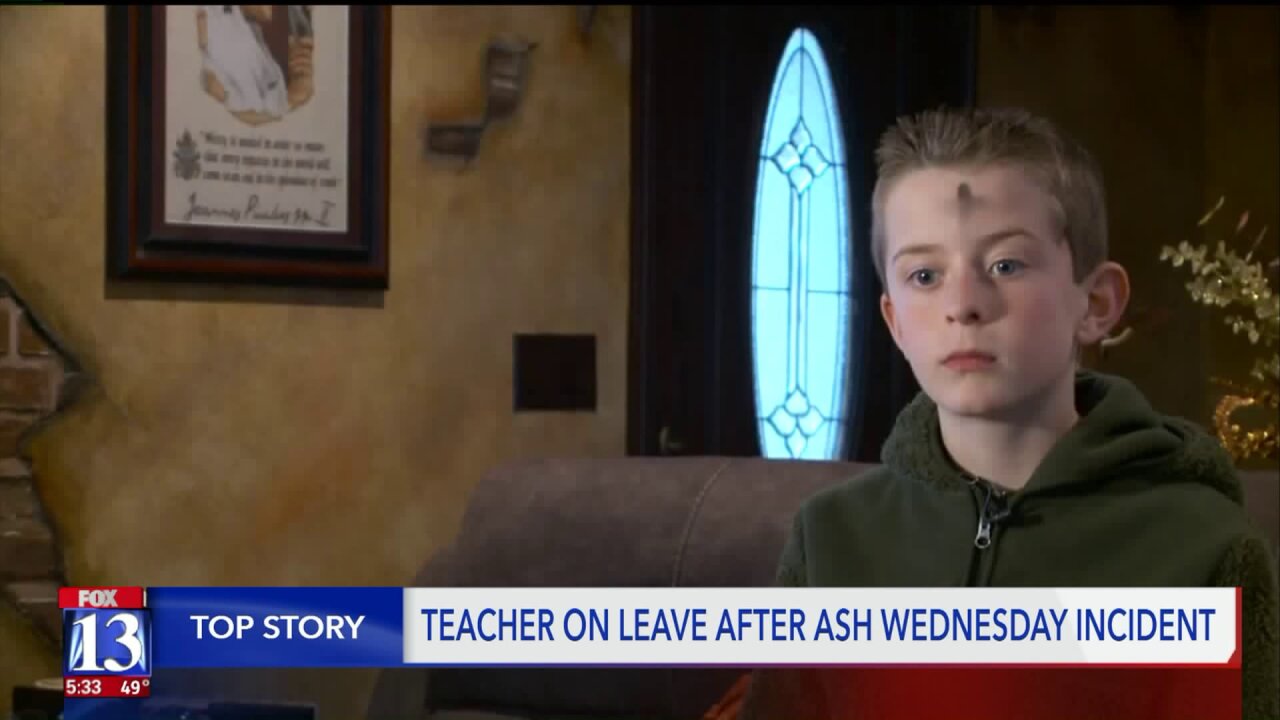 BOUNTIFUL, Utah — An elementary school teacher has been placed on administrative leave by the Davis School District.

“The actions were unacceptable,” the Davis School District said in the statement.  “No student should ever be asked or required to remove an ash cross from his or her forehead.  We take the matter very seriously and are investigating the situation. The teacher is currently on administrative leave.”

The teacher could face disciplinary action.

The fourth-grade teacher is accused of forcing a student to remove a cross of ashes from his forehead.

The cross is an important religious symbol for many Catholics and other Christians to commemorate Ash Wednesday, the first day of Lent.

In a statement, the district apologized for what happened.

One parent who has a son in that same fourth-grade class is rallying behind the teacher.

“It would be such a tragedy to lose her light at this school,” Tiffany Spence said.  “I pray that she doesn’t get fired.”

She believes the incident was taken out of context and does not reflect the overall quality of the work the teacher has done.

“It’s a classroom where there have been lots of disciplinary issues,” Spence said.  “There are 19 boys, there are six girls and this teacher, from day one, has been juggling so many different balls.”

As parents and students wait to learn the fate of the teacher, they hope this ends up strengthening the community instead of tearing it apart.

“We have a call to action to better educate,” Spence said.  “I pray we create a curriculum that is more inclusive, is more interfaith, is more globally centered.  We can find this as an opportunity to open our minds and to come together.”

The complete statement from the Davis School District:

“We are sorry about what happened and apologize to the student and the family for the teacher’s actions. The actions were unacceptable. No student should ever be asked or required to remove an ash cross from his or her forehead.

We take the matter very seriously and are investigating the situation. The teacher is currently on administrative leave.

In a related note, one of the first phone calls placed — after reaching out to the student’s family — was to the district’s Director of Educational Equity.

After expressing his concern, he quickly asked if he could reach out to the family — as an ordained Catholic deacon — about whether he could serve them and apply an ash cross to the student’s forehead.

That permission was granted. The family was contacted, was grateful for his offer and allowed him to do so.

The district knows and recognizes Ash Wednesday as one of the holiest days of the year in the Catholic faith and that it marks the beginning of Lent.