Trump rips into Mueller probe at CPAC during lengthy speech 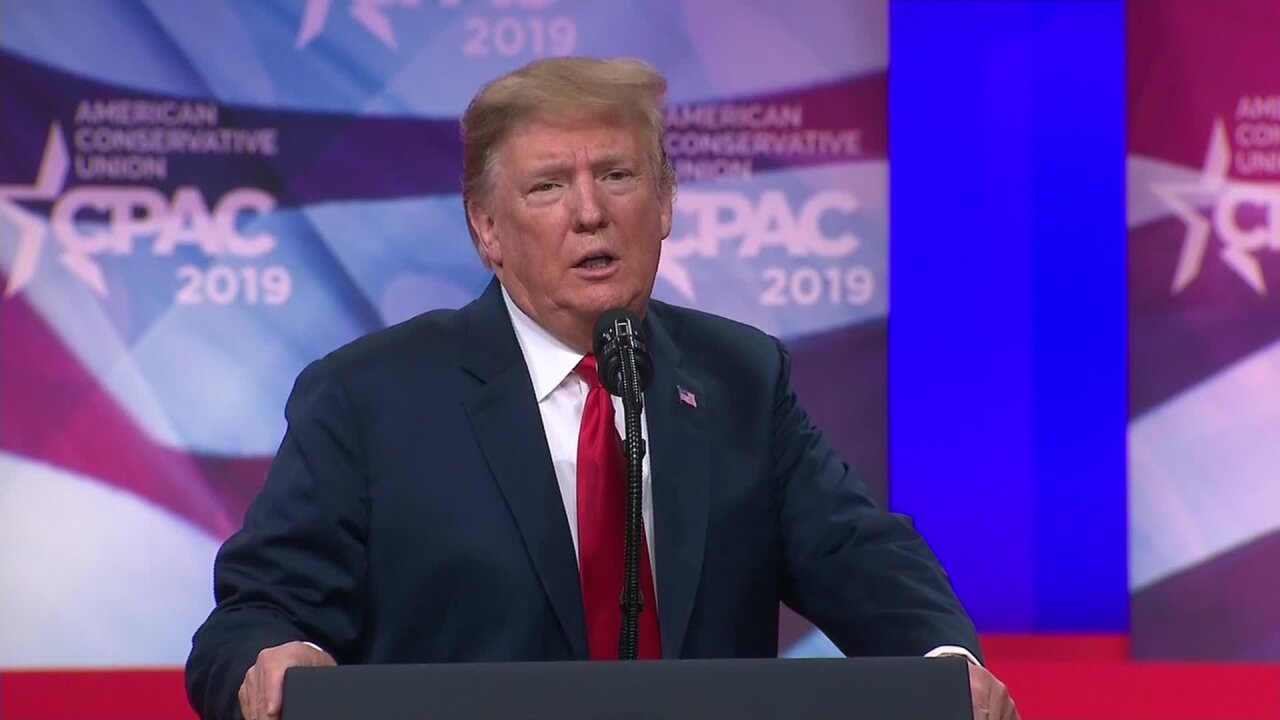 In a largely unscripted, wide-ranging speech at the Conservative Political Action Conference lasting more than two hours, Trump hit on several key issues in a characteristic fashion — mocking proponents of the Green New Deal, vowing to protect free speech on college campuses with an executive order and taking shots at his longtime rival and 2020 presidential candidate Elizabeth Warren.

But he made a point to take on Mueller, commenting extensively on key parts of the investigation, as the probe appears to be winding down.

“You put the wrong people in a couple of positions and they leave people for a long time that shouldn’t be there, and all of a sudden, they’re trying to take you out with bullshit, OK,” he added.

The President lambasted Mueller as an unelected prosecutor running unchecked and accused the special counsel’s team of investigators of being stacked against him.

“Robert Mueller never received a vote and neither did the person that appointed him,” Trump said in an apparent reference to Deputy Attorney General Rod Rosenstein, who was appointed by Trump and named Mueller as special counsel in May 2017.

“Robert Mueller put 13 of the angriest Democrats in the history of our country on the commission,” Trump said, adding, “One of them was involved with the Hillary Clinton Foundation, running it. Another one has perhaps the worst reputation of any human being I’ve ever seen — all killers. In fact, it would have been actually better for them if they put half and half and Mueller can do whatever he wants anyway, which he’ll probably do.”

No one on Mueller’s team ever ran the Clinton Foundation. Trump may have been referencing one of the Mueller team’s lawyers, Jeannie Rhee, who previously represented the Clinton Foundation in a racketeering lawsuit. While several of the lawyers have made personal donations to Democrats in the past, the majority of them have been longstanding Department of Justice employees.

Trump also argued that Mueller was compromised due to his prior interest in being FBI director after Trump fired James Comey, and repeated a favorite allegation that Mueller and Comey are “best friends.” Comey has said in the past that he and Mueller are not best friends.

He also bashed Sessions’ decision to recuse himself from the Mueller investigation and delegate overseeing Mueller to Rosenstein, impersonating Sessions with a thick Southern accent.

“The attorney general says, ‘I’m going to recuse myself,’ and I said, why the hell didn’t he tell me that before I put him in?” Trump said. “How do you recuse yourself?”

He also attacked Sessions as useless, lamenting that using his powers to hire and fire cabinet members under Article 2 would have been seen as obstruction — a standard that he alleged was “only for Trump.”

“The Attorney General recuses himself, and I don’t fire him, no obstruction,” Trump said. “That’s the other thing — if you use your rights, if you use your power, if you use Article 2, it’s called obstruction, but only for Trump, for nobody else. So the attorney general is weak and ineffective and he doesn’t do what he should have done.”

Trump fired Sessions in November following an increasingly strained relationship and months of personal attacks by the President.

He also recounted Comey’s firing as being due to the former FBI director being “a bad, bad guy,” saying that he had discussed it at the time with first lady Melania Trump, and that he had anticipated bipartisan support after Democrats voiced criticism of Comey.

“I said Melania, I’m doing something today, I’m doing it because it really has to be done … he’s a bad, bad guy, that’s been proven now with all of the emails,” Trump said. “I said to the first lady, I said, ‘but you know the good news, the good news is that this is going to be so bipartisan, everyone’s going to love it’ — so we fired Comey.”

“I fire a bad cop, I fire a dirty cop, and all of a sudden, the Democrats say, ‘how dare he fire him, how dare he do this,'” Trump added.

Trump told NBC in May 2017 that he was thinking of “this Russia thing” when he decided to fire Comey, adding that he was irked by the investigation, which he saw as motivated by Democratic anger over his 2016 win.

Here were some other key elements of Trump’s speech:

Trump said the US had learned a lot since the sudden conclusion of his summit with Kim Jong Un and repeated his previous explanation for not reaching a deal — “I had to walk, because every once in a while, you have to walk.”

He added that North Korea had said it was “willing to do much less on the sanction front. But you see, that’s not what happened there. So, already I think we’re negotiating.”

Trump, who has faced backlash for saying he took Kim’s word that the North Korean leader was unaware of former prisoner Otto Warmbier’s capture, said Saturday that he was torn between his obligation to negotiate and his support for the Warmbiers.

“I’m in such a horrible position,” Trump said. “Because in one way I have to negotiate. In the other way, I love Mr. and Mrs. Warmbier. And I love Otto. And it’s a very, very delicate balance.”

“Just this week more than 100 Democrats in Congress signed up for a socialist takeover of American health care,” he said, apparently referencing the Medicare For All bill currently supported by many House Democrats.

Trump said that the plan “would lead to colossal tax increases” and “take away private coverage from over 180 million Americans,” as opposed to the private plans and new cooperative plan backed by his administration “where you get better insurance than Obamacare for a fraction of the cost.”

After discussing the Green New Deal, Trump urged those considering socialism to look to Venezuela to see its failures.

Trump came out swinging against the Green New Deal, calling the progressive climate plan an attempt by Democrats to “completely take over American energy and completely destroy America’s economy through their new $100 trillion Green New Deal … which somebody described as a high school term paper written by a poor student.”

He said that the plan would destroy the natural gas, nuclear power and auto industries as “their plan would remove every gas-powered car from American roads.”

The plan actually calls for “overhauling transportation systems in the United States to eliminate pollution and greenhouse gas emissions from the transportation sector as much as is technologically feasible” and does not call for taking away cars.

“You just have to cross 95% of the world and it would force the destruction or renovation of virtually every existing structure in the United States,” he said of the plan, which aims to maximizing buildings’ energy efficiency. “New York City would have to rip down buildings and rebuild them again, I don’t think so. This is the craziest plan.”

He also bashed Green New Deal sponsor Democratic Rep. Alexandria Ocasio-Cortez of New York, saying, “I see the white-haired, long-time senators standing behind this young woman and she’s ranting and raving like a lunatic and the senators, these senators — ‘yes, I agree with this, yes, I agree.'”

Trump specifically targeted 2020 presidential candidate and Democratic Sen. Elizabeth Warren of Massachusetts, saying that he should have saved Saturday’s speech for a real opponent closer to election season.

“I just want to be the Republican that runs against them,” he said of Democrats endorsing progressive projects such as the Green New Deal. “I’m going to regret this speech, this speech should have been delivered one year from now and not now, dammit.”

He also reused his “Pocahontas” nickname for Warren, claiming that he’s destroyed her career such that she won’t be the Democratic nominee he’ll face in 2020.

“I should have saved the Pocahontas thing for another year because I’ve destroyed her political career and now I won’t get a chance to run against her and i would have loved it,” he said. “I don’t want to knock out all of the good stuff and end up with somebody that’s actually got talent, that would be bad.”

Trump also referenced his efforts to eradicate ISIS’ presence in Iraq, telling the CPAC audience that different generals told him on his trip to Iraq that they could defeat the group in one week as opposed to two years.

“What I was told by a general who I had to fire, I said, ‘General, how long before we get 100% of the caliphate?’ He said, ‘sir, two years.’ I said, ‘I can’t take it two years.’ And then I flew to Iraq,” Trump said. It was unclear to whom Trump was specifically referencing but former Defense Secretary Gen. James Mattis resigned in December over disagreements with Trump over how to pull troops out of Syria.

Trump said that while in Iraq, he asked generals there why it would take two years to “knock off two or three or four percent, which is what we had left.” He said that a general he called “Raisin’ Cain” then told him, “‘It won’t, sir, if we attack them in a different manner, we can do it much faster … we can have it totally finished in one week.'”

The general then added that his superiors coming in from Washington had not conferred with him, and that “you’re the first one to ask us our opinion,” Trump said.

This story has been updated with additional developments Saturday.