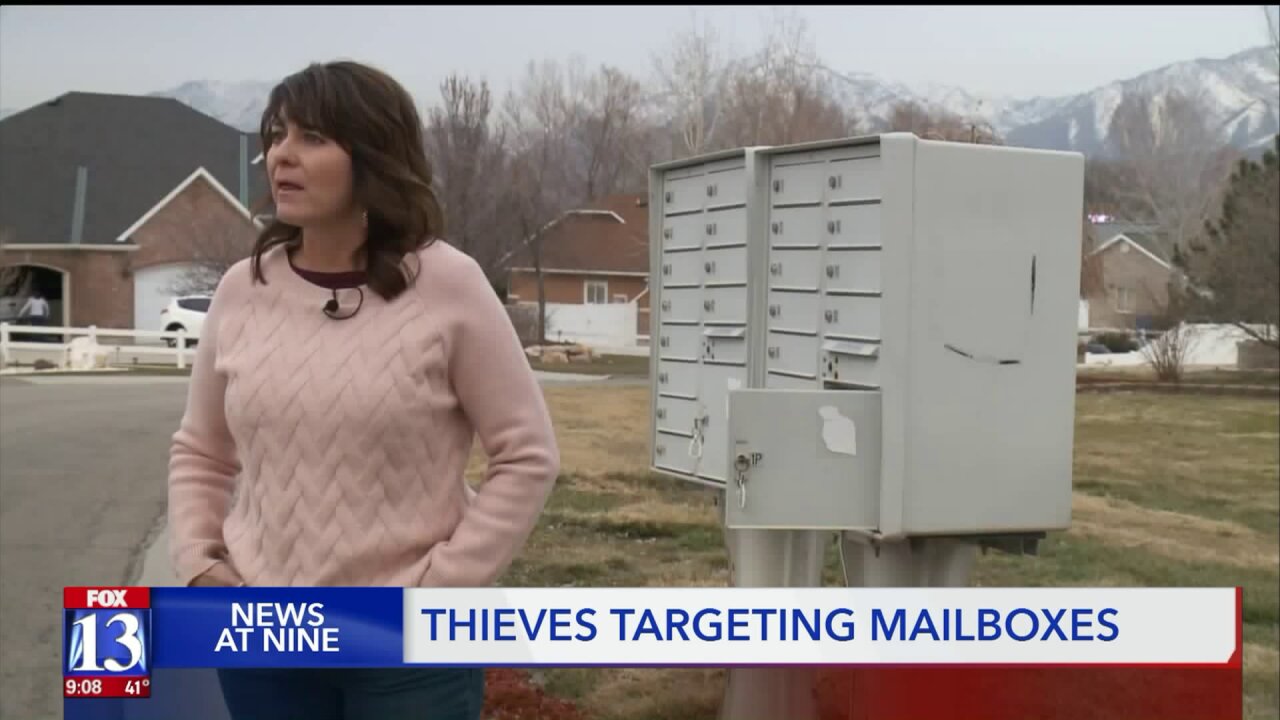 Six community mailbox break-ins have occurred over the last couple of weeks, five in Taylorsville and one in West Valley City, according to police.

“I’m actually checking it two or three times a day to make sure I don’t miss it,” said Taylorsville resident Tonya Huff and she peaked in her mailbox for the third time Friday.

Her community mailbox was among the handful targeted by mail thieves.

“We want to be able to go out day-to-day and not have to worry about our mail,” Huff said.

“These people are being victimized and then their identities are being compromised and it’s one of those things we want not only to stop but to hold these people accountable for,” said Sergeant Rob Scott with the Unified Police Department.

After the mailbox break-in in Tonya’s neighborhood, residents received a letter from the Postal Service letting them know their boxes may have been broken into, and not much more.

“It’s a very nice neighborhood, we all look out for each other and it’s just sad that people have to target our mailboxes,” she said. “It’s alarming.”

Another community mailbox not even two miles from Tonya’s house was cracked open a few nights ago… it’s still broken.

“They [mail thieves] are taking what looks like a crowbar, some kind of pry tool. They’ll pry the back of it, they’ll pry open the lock,” described Scott.

US Postal Inspector, Jared Bingham, said it’s it’s a federal felony to steal someone’s mail, punishable by up to five years in prison and potential fines — but this person doesn’t seem to be stopping and police don’t know who is doing it.

UPD said they have one potential suspect, a man they located in the area of one of the mailbox thefts. Police said he was in possession of mail and charged for such, however, he did not have any of the mail that was in one of the community boxes.

Bingham said the best defense for residents is just to use common sense.

“Don’t put things in and leave it in overnight, if you can get things out of the mailbox as soon as you can.”

“It’s frustrating I have to look out my window and check and say, ‘Oh, there’s the mail!’ and run up there and get it right then and there,” Huff said.

While Tonya doesn’t believe any of her mail went missing, that doesn’t mean she’s okay with it happening in her neighborhood.

“I feel like I have to be on alert 24/7,” Huff said. “You don’t think about it all the time until you actually take a step back and think about it and then you’re like, ‘Oh boy, this is scary.’”

Residents who have been impacted need to retrieve their mail from the post office until their boxes are repaired.

Anyone with information on the person, or people responsible are asked to call the police.