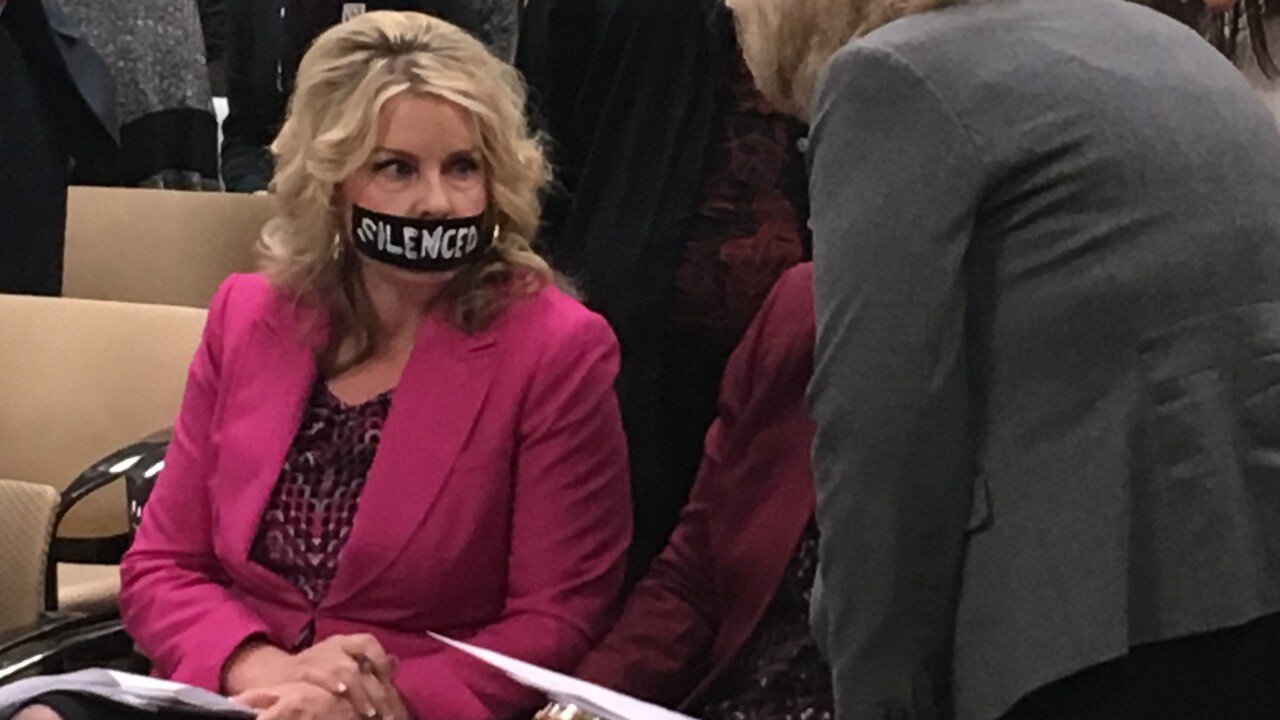 A woman sits with her mouth taped during a debate on the conversion therapy ban bill in the House Judiciary Committee. (Image by Eric Weseman, FOX 13 News)

SALT LAKE CITY — A bill that bans conversion therapy on LGBTQ children in Utah has been held in a House committee.

House Bill 399, sponsored by Rep. Craig Hall, R-West Valley City, seeks to block the practice amongst licensed therapists. Those who violated the ban would face a state investigation and possibly lose their license.

But the bill ran out of time at an emotionally charged hearing on Friday. Social conservatives, LGBTQ rights groups and those who have gone through efforts to change their sexual orientation packed a small committee room to speak to it. A woman wore tape over her mouth with the word “SILENCED” written on it. She told FOX 13 she has clients who have same-sex attraction and feared the bill could stifle her work.

Nathan Dalley described going through conversion therapy to change his sexual orientation. He said he was told to act more masculine, and use a rubber band to snap on his skin if he had a “gay thought.” He broke his skin doing that.

Lawmakers on the House Judiciary Committee are proposing a number of substitutes, ranging from modifying the definition of conversion therapy itself to stripping any kind of investigation into licensed therapists.

“I have concerns in the underlying bill,” said Committee Chairwoman Karianne Lisonbee, R-Clearfield.

She said the bill did not address underlying cultural or social context of children who might seek therapy. She said based on her reading of the bill, religious context would be “disallowed.”

Conversion or reparative therapy are efforts to get someone to change their sexual orientation or gender identity. Practices have ranged from electroshock and induced vomiting, to being forced to present as more masculine or feminine. The practice has been discredited, but still persists in Utah. People who have undergone it often report being referred to it by ecclesiastical leaders.

The bill has religious exemptions, which were critical in getting the bill to move forward in the Utah State Legislature. FOX 13 first reported last week that The Church of Jesus Christ of Latter-day Saints, a powerful influence on Capitol Hill, said it would not oppose the bill because of the exemptions. The church now denounces conversion therapy that subjects people to abusive practices.

The Catholic Diocese of Salt Lake City said it had no position on the bill.

The bill has been endorsed by Governor Gary Herbert, said Rep. Hall. Speaking to reporters on Thursday, the governor called some conversion therapy methods “barbaric.”

The bill could return for another committee hearing on Tuesday.