A 7-year-old dog lover is fighting a rare cancer. People worldwide sent her 80,000 pictures of their pups 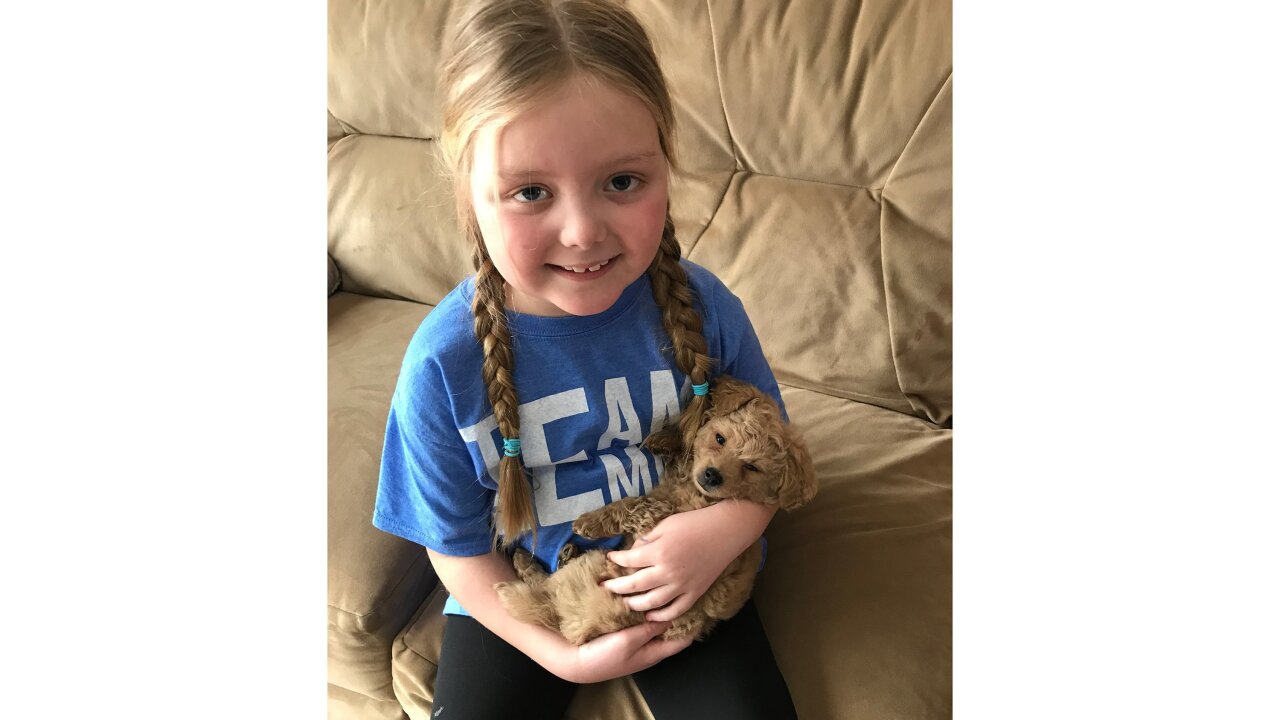 Emma Mertens received more than 80,000 pictures of dogs along with letters from around the world as she fights a rare cancer.

(CNN) — Emma Mertens giggles and her face lights up every time she looks at a picture of a dog. It’s a good thing she feels that way because she’s got 80,000 of them to look at — with more pouring in by the minute.

Family and friends had an idea a month ago to send the 7-year-old Wisconsin girl cute pics of their pups with well wishes as though they were penned by their doggies.

They hoped it would cheer up Emma and her family after learning she has a rare form of brain cancer – one that has no cure. But no one expected what would happen next.

The world got wind of the plan

Within days, what was just a friends-and-family project went global.

“It got posted onto Facebook a couple of times. Next thing you know it went viral,” her dad, Geoff Mertens, told CNN.

“Some reality TV star from New Jersey shared it on her Instagram page – The Real Housewives of New Jersey,” he said.

“Don’t ask me who. I’ve never seen it but I’m sure she’s just a big dog lover. Then (practically) every dog site’s Instagram page in the country shared it,” he said.

He told CNN Emma has gotten letters from as far away as Japan, Australia and Venezuela.

The girl’s neighbor set up a GoFundMe so that it’s not just pictures they get – but funds to pay for her medical bills both now and in the future.

Her mom, a teacher, is on unpaid leave to take care of her daughter. The fund has surpassed its goal of $100,000.

The photos are a nice pick-me-up

Emma just finished week five of six weeks of radiation. Next week is her last one.

“When Emma is feeling down, or just really tired from radiation or just woke up from a nap — we’re using the photos as a nice pick-me-up,” her dad said.

The family had to set up a P.O. box because their mailbox was overwhelmed.

“Whatever minor headaches of flooding a mailbox, all of that is well worth it for what it’s doing for Emma,” Mertens said.

The family dining room is filled to the brim with boxes of letters. Emma’s email account fills up every hour with 3,000 messages before she can’t receive anymore.

“I have to organize them (in folders)” to make room for more incoming, the dad said.

The gesture makes a difference for the senders too

The other day, a postcard came in the mail. It said: “My name is Ginger and I live with my mom. The photos on this postcard was me trying to say hello to you but my tongue got in the way. Hope you have a great day!”

It came from Becca Duvall. an Atlanta resident.

“Ginger has brought immeasurable joy to my life especially in hard times or when I’m feeling down,” she told CNN. “I think it’s wonderful that even with the chaos going on in the world, dogs and positivity can bring people together.”

Another photo came from the owner of two Golden Retrievers in Virginia.

“We are both BIG and FLUFFY boys who love to play,” the post read. “We are thinking of you Emma, and we are sending you some puppy cuddles.”

“I have worked with children for a long time. So her story had an impact on me,” said Ranger and Kota’s owner, Christi Haizlip.

“I know how much joy my dogs bring to me every day, and I wanted to share them with her,” the Richmond, Virginia resident told CNN.

People have offered to fly in their dogs

Emma loves dogs but her family can’t have one.

“Myself and my middle child are allergic to dogs. we do get to dog sit and get our fix,” said Mertens.

Emma’s favorite is the neighbor’s black Lab, Madison, who sleeps in her bed every night she visits.

“They just have a bond. It’s pretty unique,” the dad said.

People from across the country have offered to fly their dogs to come visit her. But she’s got plenty of dog friends in the neighborhood.

“It’s just incredibly overwhelming in a very good way to see so many strangers take a couple of minutes out of their day to put a smile on my daughter’s face. Kindness is real. The love is real,” Mertens said. “That’s what’s amazing about all of this.”

Emma even gets pictures of other animals– she and her father have a big laugh.

“You’ll get an occasional horse or rabbit. Pet owners just have big hearts.”

All of this brings attention to a rare disease

On Thursday, the family celebrated Emma’s half birthday (she’s now 7-and-a-half) with half a birthday cake. Those half years mean a lot for a child that may not have many months left.

The biggest gift for her family, says, her father, is the attention all this dog love can bring to her cancer – called DIPG or Diffuse Intrinsic Pontine Glioma.

It’s a type of tumor found in the brain stem. It’s inoperable due to its location and primarily affects children between the ages of 5 and 7.

“Two hundred kids a year in the world are diagnosed with this. That’s it,” Merten said.

He says the family won’t know how the radiation has affected his daughter’s tumor for a few weeks. But they’re hopeful. She’s gotten much of her mobility back and the double vision has gone away. The next step is to join a clinical trial.

Astronaut Neil Armstrong’s daughter died in the 1960s from the same cancer.

“They haven’t found a cure and don’t treat it any differently in 50 years,” Emma’s determined father said. “We’re going to try to bring awareness to this.”