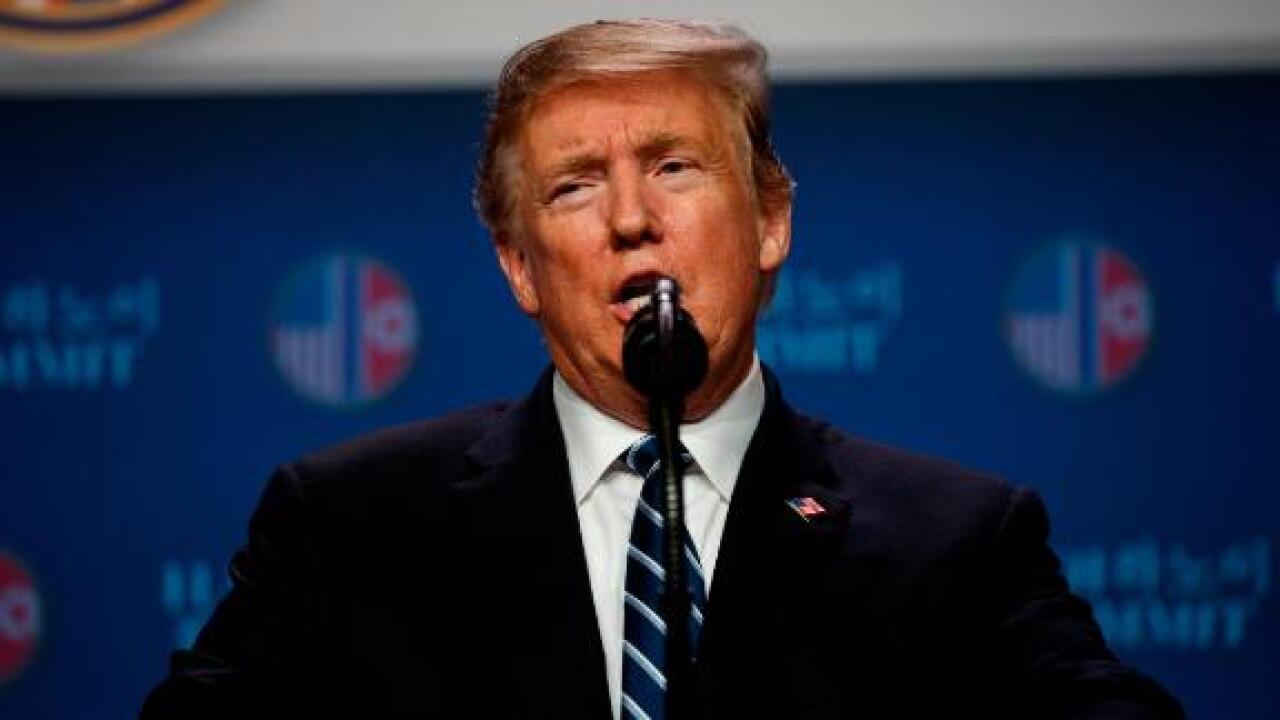 “He felt badly about it. He felt very badly,” Trump said at a news conference after his second summit with Kim, after saying they discussed the matter privately. “He tells me that he didn’t know about it and I will take him at his word.”

North Korea released Warmbier, an American student, in June 2017 after more than a year of imprisonment, returning him to the US in a coma. Warmbier, who was 22 at the time, was blind, deaf and never regained consciousness. He died days after his return. US officials quickly blamed North Korea for the brain damage that led to the young American’s death.

Trump said he believed Kim’s denial in part because it would not be in Kim’s interest for Warmbier to wind up in a coma. “I don’t think that the top leadership knew about it,” Trump told reporters in Vietnam. “I don’t believe that he (Kim) would have allowed that to happen.”

It was the latest instance in which Trump has taken the denial of an autocratic leader at face value, demonstrating the administration’s selective attention to human rights. It’s an issue that has put the President at odds with Republican lawmakers usually in his camp and drawn criticism that he’s undermining his own mission to change North Korea.

Trump has repeatedly shown a willingness to suspend belief when it comes to strongmen like Kim, accepting Saudi Crown Prince Mohammad bin Salman’s denial of involvement in the premeditated murder of the journalist Jamal Khashoggi and Vladimir Putin’s claim Russia didn’t meddle with the 2016 US presidential election.

On Thursday, Republicans, Democrats and even former administration officials pushed back on the President’s comments about Warmbier.

“Americans know the cruelty that was placed on Otto Warmbier by the North Korean regime,” Nikki Haley, Trump’s former Ambassador to the United Nations, tweeted. “Our hearts are with the Warmbier family for their strength and courage. We will never forget Otto.”

Sen. Sherrod Brown, the Ohio Democrat whose constituents include Warmbier’s parents, said Trump’s comment “sends a message to dictators.” Former Republican Sen. Rick Santorum said it was “reprehensible, what he just did.”

“He gave cover, as you said, to a leader who knew very well what was going on with Otto Warmbier,” Santorum told CNN’s John Berman. “I am disappointed, to say the least,” said Santorum, a CNN political commentator.

A few Republicans glossed over the issue. Sen. Lindsey Graham of South Carolina didn’t mention human rights in his statement praising Trump for walking away from “a bad deal” in Vietnam. Majority leader Mitch McConnell praised Trump’s handling of Kim in remarks on the Senate floor, but didn’t mention Warmbier.

When a CNN reporter when asked if he was comfortable with Trump letting Kim off the hook about Warmbier, McConnell sidestepped: “Yeah, I just addressed this whole issue on the floor.” When asked directly if he thought Kim should be held responsible for Warmbier’s death, McConnell walked away without answering.

Susan Collins, a Republican senator from Maine who sits on the intelligence committee, expressed disbelief at the idea Kim was unaware of Warmbier’s status.

“I obviously don’t know what the conversation entailed, nor do I know whether Kim Jong Un came up with specific evidence to support that statement,” Collins told CNN. “I personally find that statement extremely hard to believe.”

Trump’s whitewash ignored the tight control that Kim maintains over his country’s internal affairs as its supreme leader, particularly when it comes to sensitive matters such as the imprisonment of an American citizen.

It’s part of a broader pattern of behavior that Trump has displayed with authoritarian strong men — praising the Philippines’ Rodrigo Duterte who has been assailed for extrajudicial killings and media repression, lauding China’s Xi Jinping and Turkey’s Recep Tayyip Erdogan for making changes that extended their tenure and power.

Administration policy has followed, with the White House saying little about the rollback of rights and freedoms in Hungary, Poland, Egypt and other places. When the Trump administration does raise the issue, there often is a domestic political angle.

The White House and its proxies have blasted rights abuses in Iran, a target of lawmakers on both sides of the aisle. Administration officials have also come down hard on human rights abuses in Venezuela and Cuba, critical issues in Florida, which Trump won by only 1.2 percentage points over Hillary Clinton in 2016.

“I don’t think the human rights issue are issues that are of great personal importance to President Trump,” said Frank Jannuzi, president of the Mansfield Foundation and a former adviser to US negotiators. “He doesn’t seem to raise those issues with other leaders, whether it’s Turkey, Saudi, Philippines, China.”

“Some would say that he has dropped the ball … on the other hand, I think pragmatists would say, ‘Well he’s got his priorities straight. Focus on denuclearization first, and human rights second’,” Jannuzi said. “I don’t think it should be an either-or choice.”

Trump did acknowledge that North Korean prisons — a nefarious facet of Kim’s repressive rule — are “rough.”

Kim oversees one of the world’s most repressive regimes, one that human rights groups say includes concentration camps, starvation and medical experimentation on human subjects. The UN estimates that North Korea has 80,000 to 120,000 people in its gulags.

Matthew Zweig, a senior fellow at the Foundation for Defense of Democracies, notes that one in 10 citizens inside North Korea are put to work as slave labor and that Pyongyang “compels its citizens abroad to work in horrific conditions,” earning over $500 million a year by heavily taxing the nearly 100,000 workers it sends overseas, mostly to China and Russia.

When a reporter tried to ask Kim Thursday if the two leaders had discussed his country’s human rights record, Trump jumped in and said: “We’re discussing everything.”

At one time, Trump did hold Pyongyang to account for its abuses.

‘It’s rough in a lot of places’

The President used his first State of the Union address to blast North Korea for its cruel policies, but the talk of human rights dropped once he began planning to meet Kim. After their first June 2018 summit, Trump brushed off the issue. “It’s rough in a lot of places, by the way, not just there,” he told reporters.

“There was a clear abdication” on human rights after the summit, said a source who was familiar with the administration’s thinking at the time, adding that the omission “makes no sense,” given Trump’s pitch for denuclearization.

The President has argued that if the 35-year-old despot gives up his nuclear weapons, North Korea “would be very rich.” But “there is no bank, no financial institution that would go in to North Korea even after denuclearization because of the human rights abuses and supply chain issues,” the source said.

Allison Evans, the deputy head of Asia Pacific Country Risk at the consultancy group IHS Markit noted that even if Trump relaxed some or all US penalties on North Korea, economic development would still be stymied by United Nations sanctions tied to human rights violations.

“A probable prerequisite for their removal would be progress on North Korea’s human rights issues, making any substantial boost to North Korea’s economy unlikely,” Evans said.

In December, a federal judge in Washington awarded Warmbier’s parents more than half a billion dollars in a wrongful death suit they brought against North Korea.

A few hours after Judge Beryl Howell’s opinion was published, Trump tweeted that he had been briefed by his team working on North Korea and he was looking forward to a second summit with Kim. He made no mention of the judgment.

“Looking forward to my next summit with Chairman Kim!” Trump wrote.