Trump dines with Kim as world waits on potential deal 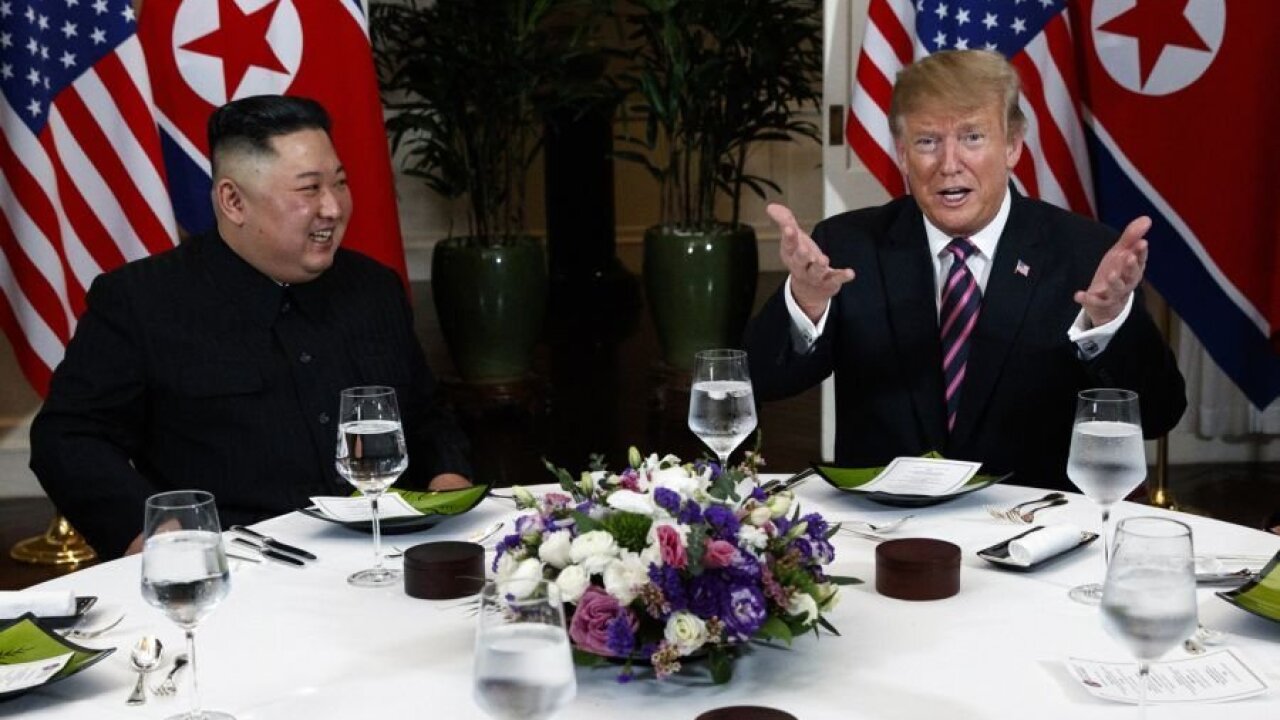 President Donald Trump embarked Wednesday on another round of high-stakes nuclear diplomacy with North Korea’s Kim Jong Un, a follow-up encounter that officials in the US and across Asia are watching with trepidation as the President works to convert personal chemistry into real progress.

President Donald Trump embarked Wednesday on another round of high-stakes nuclear diplomacy with North Korea’s Kim Jong Un, a follow-up encounter that officials in the US and across Asia are watching with trepidation as the President works to convert personal chemistry into real progress.

“I thought the first summit was a great success, and I think hopefully this one will be equal or greater,” Trump said during his first Hanoi encounter with Kim, a solo meeting inside the French colonial Metropole Hotel in the historic city center.

The two men greeted each other warmly before a row of US and North Korean flags, shaking hands and laughing eight months after their initial meeting in Singapore.

Trump hailed the friendship, saying the greatest achievement of his diplomatic gambit was the amicable way they’ve gotten along.

“I think the greatest progress is our relationship,” he said, before praising the iron-fisted despot as a “great leader” who could see his country’s economy blossom.

“I think your country has tremendous economic potential. Unbelievable. Unlimited,” he said. “I think you will have a tremendous future with your country — a great leader. And I look forward to watching it happen and helping it to happen.”

The North Korean leader, for his part, praised Trump’s “courageous decision” to engage directly and trumpeted their direct diplomacy, noting that they “have been able to overcome all these obstacles” to get to a second summit.

But the President revealed little of his intentions toward convincing Kim to abandon his nuclear program. Asked whether he’d walked back his vow to insist upon the denuclearization of the Korean Peninsula, Trump said he had not. And questioned later whether he planned to declare an end to the Korean War, he said: “We’ll see.”

The meetings come as Trump’s former lawyer prepares to launch extraordinary allegations of racism and fraud against the President on Capitol Hill, providing a distraction that aides fear could overshadow the summit.

“Michael Cohen was one of many lawyers who represented me (unfortunately),” he wrote from his hotel in Hanoi. “He is lying in order to reduce his prison time.”

Trump was meeting up with Kim at the French colonial Metropole Hotel, the city’s finest, for a solo conversation that kicked off their summit. A small dinner — billed by the White House as a social encounter — followed. Trump was joined there by Secretary of State Mike Pompeo and his acting chief of staff Mick Mulvaney for the roughly 90-minute meal.

A person close to the planning of the dinner told CNN that as of midday, the chefs were still struggling to get a menu approved because officials from both the US and North Korea kept adjusting the menu to make it “super simple.”

Trump and Kim Jong Un will sign a joint agreement on Thursday, according to the White House, and the President’s daily schedule lists a signing ceremony after a day of meetings with Kim.

US officials had been working to draft an agreement with their North Korean counterparts ahead of Trump’s arrival but it’s not yet known what is contained in the document.

Ahead of their talks, it remained unclear what steps Kim was willing to take toward eliminating his nuclear arsenal or what concessions the US might offer in exchange. Teams from both countries had arrived earlier in Hanoi to negotiate an agreement for the two leaders to sign at the conclusion of their summit.

Potential outcomes could include agreements from North Korea to allow inspectors into certain nuclear sites or even a decision to close the expansive Yongbyon nuclear research center. At a minimum, US officials hope for a more defined road map that would lead North Korea to give up its nuclear weapons.

In exchange, Trump could offer to begin moving toward formal diplomatic relations through the exchange of liaison officers. Or he could agree to ending the Korean War, an attractive prospect for a President intent on winning a Nobel Peace Prize.

But expectations are low, and the US has appeared to abandon an earlier request that the second summit result in North Korea agreeing to provide a full accounting of its nuclear program. Inside the White House, some advisers have privately raised concerns that Trump could offer too much to Kim at the summit, which he insisted upon after his first meeting in June garnered widespread media attention.

Trump did not offer any clarity on Wednesday, tweeting that speculation about an outcome was premature.

“All false reporting (guessing) on my intentions with respect to North Korea,” he wrote. “Kim Jong Un and I will try very hard to work something out on Denuclearization & then making North Korea an Economic Powerhouse. I believe that China, Russia, Japan & South Korea will be very helpful!”

In a nod to the criticism he has faced about the pace of progress, Trump later acknowledged that “some people would like to see things go quicker” but insisted his diplomacy thus far has been a success.

Trump began his day at the mustard-colored presidential palace in Hanoi where he met with Vietnam’s President and General Secretary of the Communist Party Nguyen Phu Trong and laid out the rationale for holding his second summit with Kim here.

“We (Trump and Kim) both felt very good about having this very important summit in Vietnam because you really are a good example of what can happen,” Trump said, pointing to Vietnam as the picture of a bustling and thriving economy.

The prospect of an economic boom in North Korea has been a core aspect of Trump’s pitch for Kim to abandon his country’s nuclear weapons. In Singapore, Trump showcased the modern Southeast Asian city-state as an example of the possibilities for North Korea with an influx of foreign investment.

Speaking during a separate meeting with Vietnam’s prime minister, Trump said he believes Kim “wants do something great” that “will be on par” with Vietnam’s transformation to “make North Korea into a great economic power.”

But as Trump prepared for his meetings with Kim, another controversy involving him was brewing in Washington. As Trump shuffled from one photo opportunity to the next with Vietnam’s top officials, an advance copy of his former aide Michael Cohen’s testimony to Congress became public.

In those remarks, Cohen will allege that Trump was aware of Roger Stone’s communications with WikiLeaks during the 2016 campaign and accuse Trump of lying about his dealings with Russia during the campaign. He also revived the controversy surrounding the medical deferments Trump obtained to avoid serving in the Vietnam War claiming he had bone spurs.

“I find it ironic, President Trump, that you are in Vietnam right now,” Cohen will tell Congress on Wednesday.

The testimony will proceed overnight in Vietnam, though White House officials said there was little they could do to prevent the President from remaining awake in the wee hours to watch. Aides were also planning to take notes on the testimony to brief him.

The President has expressed regret previously that the various investigations have undermined him on the world stage. He’ll be particularly sensitive to appear undercut around Kim, with whom he’s cultivated a close friendship over the course of the past year.

Before he departed for his meetings, Trump issued a series of tweets laying the foundation for his day — praising Vietnam and criticizing Democrats for their skepticism of his diplomatic gamble.

“The Democrats should stop talking about what I should do with North Korea and ask themselves instead why they didn’t do “it” during eight years of the Obama Administration?” Trump tweeted around 9:45 a.m. local time.

He did not specify what “it” referred to.

“North Korea would be the same, and very quickly, if it would denuclearize,” Trump wrote. “The potential is AWESOME, a great opportunity, like almost none other in history, for my friend Kim Jong Un. We will know fairly soon – Very Interesting!“

This story has been updated.