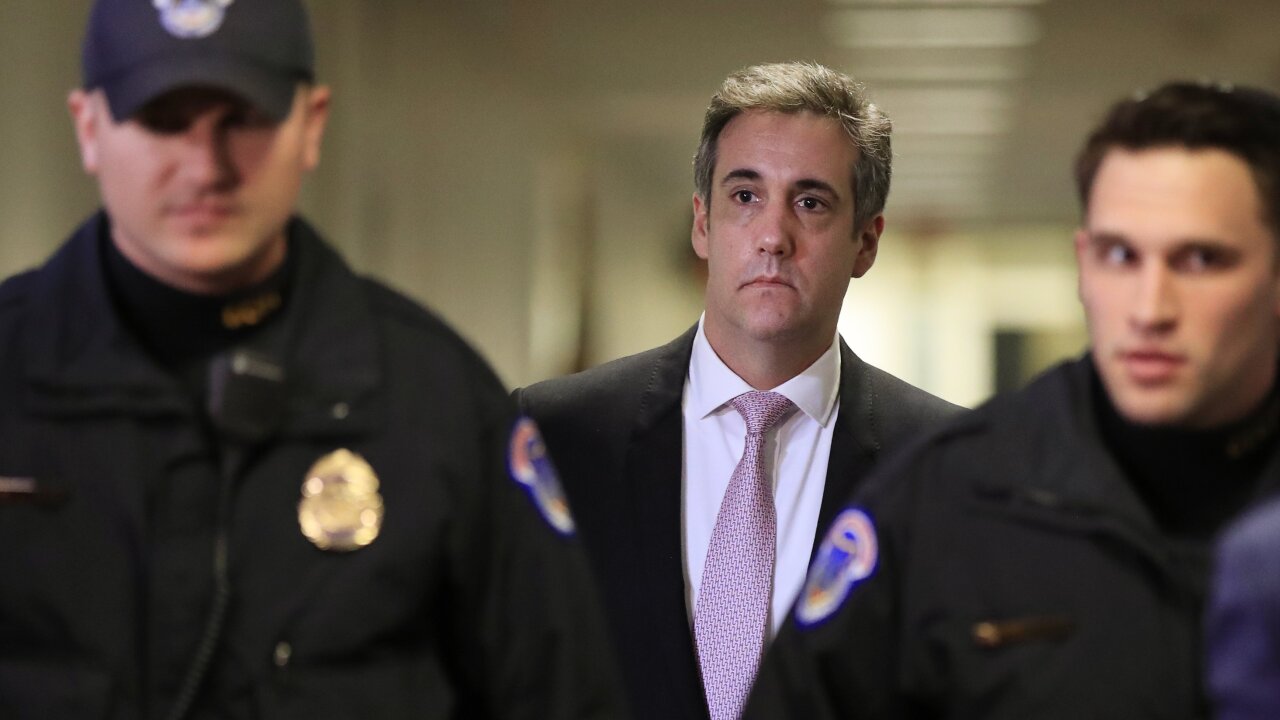 Donald Trump’s former attorney Michael Cohen is prepared to testify that Trump was aware of longtime adviser Roger Stone’s efforts to reach out to WikiLeaks in advance of its release of damaging information about Hillary Clinton’s presidential campaign, according to a copy of his public testimony submitted to Congress and obtained by CNN.

Cohen’s dramatic public testimony before the House Oversight Committee ping-ponged between Democrats who walked Cohen through the actions Trump took and Republicans who challenged Cohen over his financial crimes and past lies to Congress.

Cohen’s public testimony Wednesday was undoubtedly a spectacle, but its ultimate impact will depend upon whether Cohen’s allegations are viewed as credible.

Cohen also revealed that prosecutors in New York are investigating conversations between Trump and Cohen that occurred after Cohen’s office was searched by the FBI in April 2018.

In his testimony, Cohen explained how Trump instructed him to pay $130,000 to Stormy Daniels during the 2016 campaign for her silence about an alleged affair with Trump, which Trump denies. Trump then reimbursed Cohen as President for the payments, Cohen said — and he provided a copy of the check to show it.

Cohen told the committee that there was “no doubt in his mind” that Trump knew he was paying Cohen for “hush money payments.”

Further, Cohen testified that Trump had called him in February 2018 to discuss messaging surrounding the payment, where Trump directed him to lie about the President’s knowledge of the payment.

In his opening statement, Cohen launched a broadside against Trump, accusing him of being “a racist,” “a conman” and “a cheat.”

Cohen also talked about how Trump discussed the Trump Tower Moscow project with him into the 2016 campaign — the topic that Cohen would ultimately lie to Congress about — and that Trump had knowledge of Stone’s efforts to reach out to WikiLeaks ahead of the release of hacked Democratic emails during the 2016 campaign.

“The last time I appeared before Congress, I came to protect Mr. Trump. Today I am here to tell the truth about Mr. Trump,” Cohen said.

Ohio Rep. Jim Jordan, the top Republican on the Oversight Committee, accused Cohen of turning against Trump after he did not get a job at the White House.

“You wanted to work in the White House, you didn’t get brought to the dance,” Jordan said.

“I was extremely proud to be the personal attorney for the President of the United States of America. I did not want to go to the White House,” Cohen responded.

But Republicans didn’t buy Cohen’s answer, pointing to court filings from the Southern District of New York that stated Cohen “privately told friends and colleagues, including in seized text messages, that he expected to be given a prominent role and title in the new administration.

Cohen insisted he didn’t want a White House role, saying that prosecutors statement was “not accurate.”

Cohen, in fact, was angling for the White House chief of staff job, according to a person who talked to him about it, and at one point there was a movement to push him into the White House counsel’s office.

The President suggested it to former White House counsel Don McGahn, but he said Cohen didn’t have the necessary experience and background to work there, and Trump dropped it after that.

Rep. Mark Meadows, a North Carolina Republican, accused Cohen of lying in the hearing itself, pointing to documents he had filed with the committee on whether he had any foreign contracts. Cohen said he would review the form and amend it if necessary.

The White House said ahead of the hearing it was “laughable that anyone would take a convicted liar like Cohen at his word.” Republicans hammered Cohen on the same theme, with one member calling Cohen “a pathological liar.”

Another Republican asked Cohen what he would call himself if he had called Trump a cheat.

Jordan and Cohen continued to battle throughout the hearing. After one exchange with another Republican, Jordan exclaimed: “His remorse is nonexistent!”

“Shame on you, Mr. Jordan. That’s not what I said,” Cohen shot back.

Preparing for his (false) testimony
When it was the Democrats’ turn to question Cohen, they gave him the chance to add new details about how he had prepared his previous congressional testimony, in which he lied, as well as the hush money payments and Trump’s conversations with Stone.

Cohen also disclosed new information when he said he could not discuss conversations with Trump that took place two months after the FBI raided his offices because they were still under investigation.

The Manhattan US Attorney’s Office, which prosecuted Cohen, is examining that conversation as well as other possible wrongdoing or illegal behavior by Trump, Cohen said.

Cohen took his preparations for his 2017 congressional testimony into the White House, telling one Democrat that changes were made to his testimony about the Trump Tower Moscow project when it was reviewed by Trump’s lawyers.

“There were several changes that were made, including how we were going to handle that message,” Cohen said. “The message, of course, being the length of time that the Trump Tower Moscow project stayed, and remained alive.”

Rep. Gerry Connolly, a Virginia Democrat, said committee staff had uncovered an email the White House had mistakenly released to lawmakers that revealed a meeting Trump had requested in May of 2017 with Cohen and Jay Sekulow, a member of the President’s legal team, where Cohen said he discussed his upcoming testimony.

Later, Cohen said he did not know who at the White House had edited his testimony, but that it had been circulated, including into the White House, because of a joint defense agreement.

Cohen also revealed that he had discussed with Trump the public messaging surrounding the payment to Daniels, saying that he had “purposefully” left Trump out of a statement last year to reporters when he said the campaign and Trump Organization were not involved with the payment.

And Cohen discussed the details of a phone call he said that he had heard between Stone and Trump, in which Stone told Trump that he had spoken by phone with Julian Assange and an email dump was coming that would hurt the Clinton campaign, according to Cohen.

A broadside against Trump
Cohen detailed several episodes involving Trump, from Trump arranging for the bidder of an auction for his portrait to when Cohen said he threatened Trump’s high school, his college and the College Board not to release his grades or test scores.

Cohen also took a shot at Trump for his medical deferments during the Vietnam War, saying he asked Trump for medical records to about his bone spur to explain it to reporters, but he was not provided any.

“I find it ironic, President Trump, that you are in Vietnam right now,” Cohen said.

Cohen provided new details claiming Trump was heavily involved in the pursuit of the Trump Tower Moscow project in 2016.

CNN reported in July 2018 that Cohen was willing to testify to the special counsel that Trump knew in advance about the planned meeting at Trump Tower.

Cohen said that Trump did not “directly” tell him to lie to Congress, but that Trump would tell him personally and the public that he had “no business” with Russia, even as he was negotiating the Moscow project.

“In his way, he was telling me to lie,” Cohen said.

Battling over Cohen’s allegations
Republicans pushed back on the allegations. Meadows brought to the hearing Lynne Patton, an African-American Department of Housing and Urban Development official who worked with the Trump family before the campaign. She stood behind him and submitted a letter for the record, rebutting Cohen’s claims about Trump being racist.

Democrats argued that Republicans were trying to sweep Cohen’s allegations under the table to protect Trump.

House Oversight Chairman Elijah Cummings, a Maryland Democrat, said that the new evidence Cohen provided “raises a host of troubling legal and ethical concerns about the President’s actions in the White House and before.”

Jordan said that Cummings’ tenure would be marked by bringing in Cohen, whom he labeled a “fraudster, a cheat, convicted felon and, in two months, a federal inmate.”

Jordan responded by charging that Cummings’ tenure would be marked by bringing in Cohen, whom he labeled a “fraudster, a cheat, convicted felon and, in two months, a federal inmate.”

Cohen’s congressional appearances come before he is scheduled to report to prison on May 6 for a three-year sentence after he pleaded guilty to tax crimes, campaign finance violations and lying to Congress in 2017.

Cummings said he was allowing the Russia questions also because Cohen made statements about the investigation in his written testimony, and because they “do not raise concern from the Department of Justice.”

This story has been updated with additional developments Wednesday and will continue to update throughout the day.