She used to scrub toilets for $9 an hour. Now this mom’s book about it is a best-seller 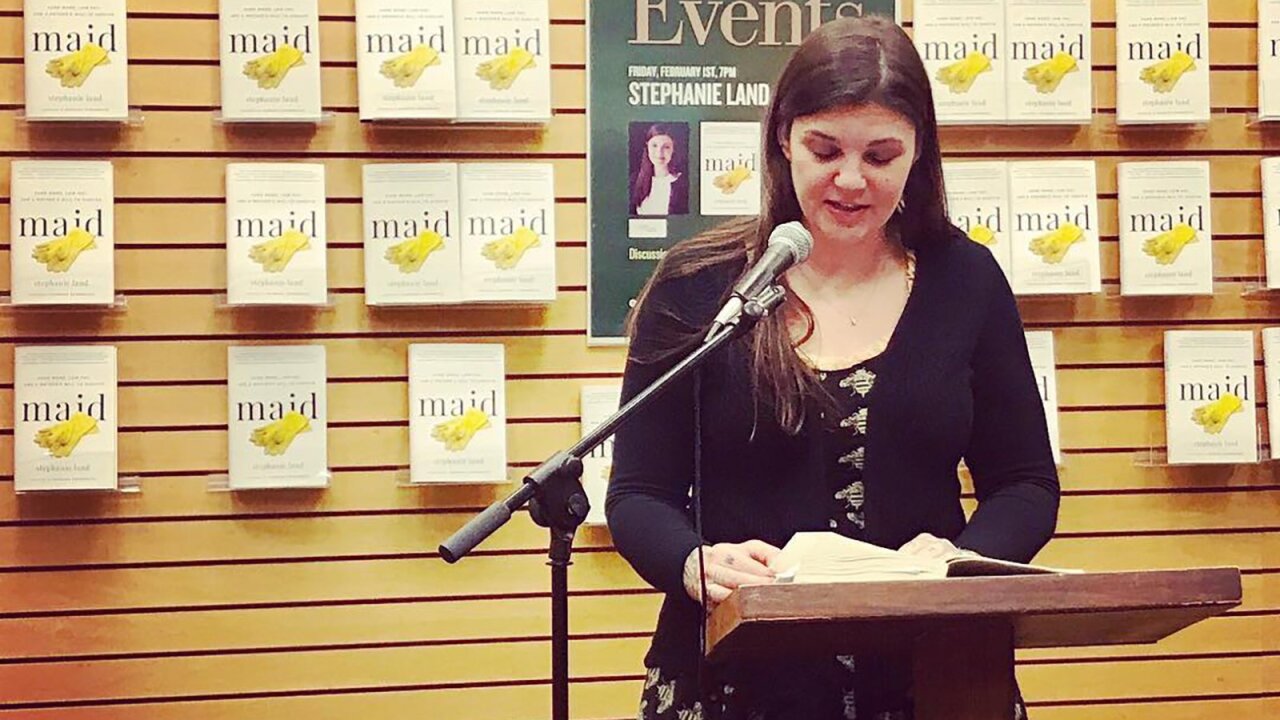 Land reading from her book at a recent event.

(CNN) — Five years ago, Stephanie Land was slumped over on her hands and knees scrubbing a bathtub. The single mom was a semester away from graduating college and pregnant with a second child.

She was broke. People cautioned her against it. But she decided to quit her job as a house cleaner and go all in on her studies with the hope of becoming a freelance writer after graduation.

“It was incredibly difficult to turn my back on paid work and have faith that my dream would pay off,” she said.

It did. The former cleaning woman has written a rags-to-riches story that’s long on rags before finally offering a hint of riches.

Her memoir about her years cleaning houses, “Maid: Hard Work, Low Pay and a Mother’s Will to Survive,” debuted two weeks ago at #3 on The New York Times nonfiction best-seller list.

The book is an illuminating window into the mundane, low-paid service work that much of America never notices or chooses to ignore.

And now, after years of grueling poverty, its sudden success is changing Land’s life.

She was on a plane last month when her book made The New York Times’ list.

“As soon as I landed, I got a huge amount of texts,” she told CNN. As the plane was taxiing to the gate, she broke down crying.

She put herself through college by cleaning houses

“Maid” begins in Land’s late twenties, when she was living in a homeless shelter with her infant daughter. One excruciating early scene describes Land’s mother flying in from Europe with her husband to help her daughter move from the shelter into a transitional apartment. Land wrote that her mother refused to even buy her lunch, forcing her to pay $10.59 for a burger — “twenty-eight cents less than what I had in my bank account.”

A later scene shows Land having a falling out with her father, with whom she and Mia were staying.

For more than a decade, she’d nursed a dream of becoming a real writer, quietly scribbling away with reddened eyes and a cup of coffee late at night after her daughter Mia had drifted off. She’d become a mother at 28, but lost the support of her family. Cleaning became about the only job she could find without a college degree in the small town where she lived near Seattle.

On her own, without financial support, Land often relied on government assistance programs. In addition to the indignity of being poor, she said even providing the documentation to prove she actually was poor became exhausting in itself.

“You’re having to prove again and again that you’re doing what you say you’re doing,” she said.

Land enrolled in the University of Montana’s creative writing program because of the school’s reputation for launching authors’ careers.

But between cleaning houses and caring for her daughter, Land was a thirtysomething student who didn’t get invited to many parties with her fellow English majors.

After earning her English degree in 2014, Land finally began to put food on the table with her pen instead of a mop. She became a writing fellow with the Washington, DC-based Center for Community Change. An essay in Vox, in which she dished on all the prescription painkillers she found in the mansions she cleaned, went viral and led to bylines in the New York Times, Washington Post, and other news outlets.

But clicks on her articles didn’t always mean dollars in her bank account.

Land was still struggling when she landed a publishing contract and received her book advance in late 2016. She still had $50,000 in student loan debt and $20,000 in maxed-out credit cards, but she finally gained some breathing room to focus on expenses beyond just basic necessities for herself and her two girls — such as seeing a chiropractor for a case of scoliosis that had worsened through years of scrubbing stains out of carpets.

And she bought the nicest car she’d owned in years: a 2006 Subaru. Even now, though, she said, “I haven’t been to the dentist in years.”

“Maid” landed high on the Times’ best-seller list, between memoirs by former first lady Michelle Obama and Senator Kamala Harris, who is running for president. Her publisher’s office “was jumping up and partying and hugging” when they got the news, Land said.

Amazon named “Maid” one of its best books for January. Barnes and Noble has the book on its recommended list for February. And author Neil Gaiman has praised her book on Twitter. Land named her younger daughter Coraline after Gaiman’s book of the same name.

Land’s book comes as director Alfonso Cuaron’s “Roma,” a film told from the point of view of a young Mexican housekeeper, is up for 10 Academy Awards, including best picture. Both take a working-class character who’s often on the margins of society and give her a leading role.

Land has been traveling around the US the past couple weeks speaking about her story. She reads sections of her book describing how her exhaustion as a mother, a maid, and a student defy the misconception some have that welfare recipients are lazy.

One fan, who lives the same meager existence Land knew for so long, splurged for an $18 train ticket to see the woman who had written herself out of poverty.

“I just took a train for two hours to see you. I blew my budget for the day,” the woman wrote in a handwritten note she gave to Land. “And from what I read, I know you understand what it’s like to have a daily budget.”

Land has been writing for broad audiences for the last few years, and her hard lessons about poverty didn’t always land softly.

“Most of the responses have been from white men trolling me on the internet,” she said.

But things feel different this time.

“I’m surprised that people really are seeing how hard it is to get on public assistance and to get off of it,” she said. She is mindful of how hard it can be to earn a living, citing the federal employees working paycheck to paycheck who lined up at food banks during the government shutdown.

“I think (the book) tells the stories of our times.”

And Land is speaking out about poverty

Land says a long list of grants, loans, and assistance programs helped her and her family eventually climb out of poverty. But she found these programs could constrain recipients as much as empower them.

Her book describes how meeting government assistance programs’ work requirements while taking college classes and raising her daughter was a constant, near-impossible balancing act. If the government is going to ask for work requirements, they should let college credit hours count for that, she says now.

“My job offered no sick pay, no vacation days, no foreseeable increase in wage, yet through it all, still I begged to work more,” Land wrote in the book. “Wages lost from missed work hours could rarely be made up, and if I missed too many I risked being fired. My car’s reliability was vital, since a broken hose, a faulty thermostat, or even a flat tire could throw us off, knock us backward, send us teetering, falling back, toward homelessness.

Some leaders are pushing to alleviate the hardships “Maid” portrays.

Sen. Kamala Harris is pushing a Domestic Workers Bill of Rights that would support those who work as nannies, house cleaners, home health nurses and similar jobs.

The proposed legislation would introduce federal requirements for domestic workers to receive many of the same benefits routinely expected in other professions, including paid sick days, affordable health care and retirement savings, rest breaks, and fair scheduling practices.

And next month Land is slated to speak on a panel about poverty alongside major progressive public policy figures in Washington as part of an event organized by the Center for Community Change, the same group that first offered her a writing fellowship.

She did it all without a man

The girls’ fathers aren’t much involved in their daughters’ lives. Land married another man in 2017, but she said her husband was abusive, and their partnership was brief.

Now she is adjusting to the life of a literary star, even if she doesn’t feel like one.

“I’m not a literary writer. I tell it very plainly, like it is,” Land said. She admires the sparse, meaning-laden sentences of Ernest Hemingway, who advised, “Write hard and clear about what hurts.”

She followed that admonition in Maid’s first line: “My daughter learned to walk in a homeless shelter.”

As she mapped out her memoir, she turned to heroes like John Steinbeck and Kurt Vonnegut and scoured breakout memoirs from contemporary female writers like Cheryl Strayed, author of “Wild.”

In the months to come Land plans to work as a public speaker and mentor low-income writers. Once she catches her breath, she’ll start thinking about another book.

Land says she chose a “hero’s journey” structure for “Maid’s” narrative, believing that memoirists should “show growth and that you’ve learned something about yourself.”

But the single mom also introduced her own modern twist: “I wanted to do it without a man at the end.”