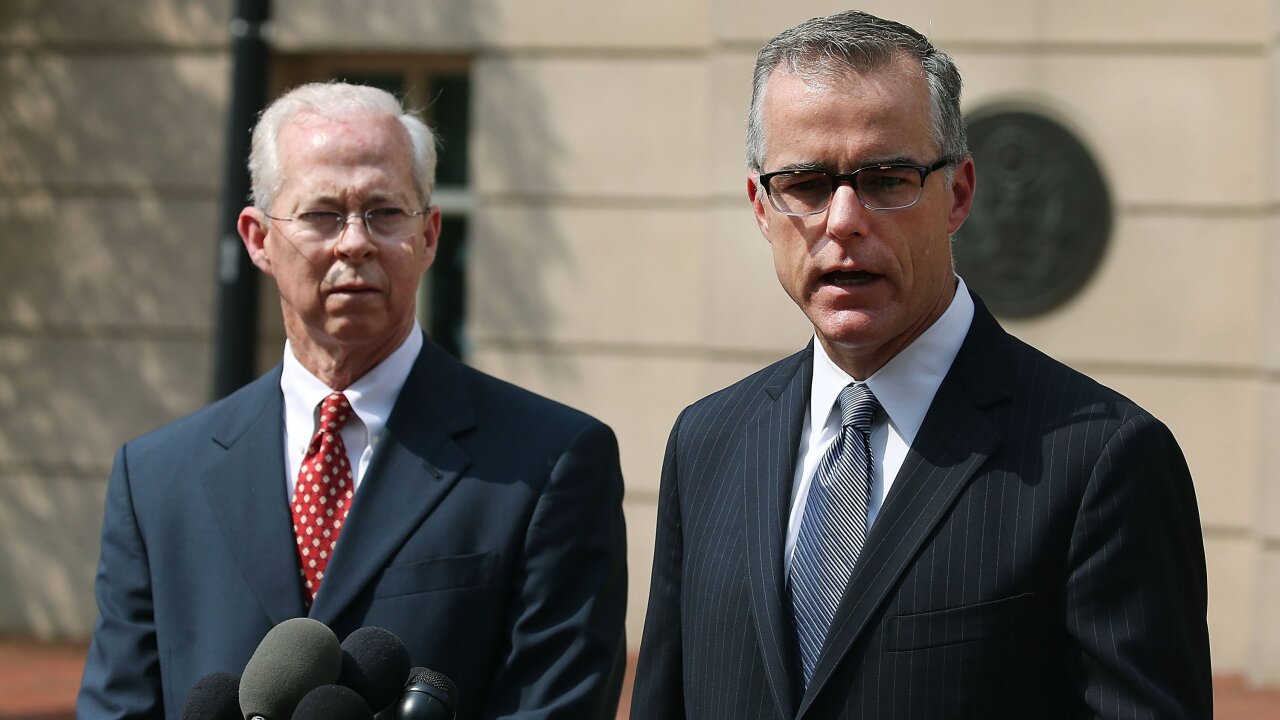 In an interview with CBS’ Scott Pelley on “60 Minutes,” McCabe said Trump had been speaking in a “derogatory way” about the Russia investigation for weeks, which they viewed as an attempt to “publicly undermine the investigation.” He said officials were concerned by the President’s “own words.”

When asked if Rosenstein was on aboard with opening the investigations into Trump, McCabe told Pelley, “absolutely.”

McCabe’s description of concerns closely track that of former FBI general counsel James Baker, who told congressional investigators last year that FBI officials were contemplating, with regard to Russia, whether Trump was “acting at the behest of and somehow following directions, somehow executing their will.”

“That was one extreme. The other extreme is that the President is completely innocent, and we discussed that too,” Baker told House investigators last year. “There’s a range of things this could possibly be. We need to investigate, because we don’t know whether, you know, the worst-case scenario is possibly true or the President is totally innocent and we need to get this thing over with — and so he can move forward with his agenda.”

Even after the investigation was launched, McCabe said the President continued to praise Russia, and described an instance where Trump said he trusted Russian President Vladimir Putin in blatant contradiction with US intelligence.

McCabe told CBS that Trump didn’t believe North Korea had done a missile test because Putin told him the rogue regime didn’t have the capability or the missiles to carry out tests for missiles that could hit the US. McCabe said Trump said so during a White House intelligence briefing, which an FBI official who was present at the briefing relayed to McCabe.

“Intelligence officials in the briefing responded that that was not consistent with any of the intelligence our government possesses, to which the President replied, ‘I don’t care. I believe Putin,'” McCabe said.

McCabe said when he heard the President had said that, he thought it was “just an astounding thing to say. To spend that time and effort and energy and that we all do in the intelligence community to produce products that will help decision-makers — and the ultimate decision-maker, the President of the United States — make policy decisions. And to be confronted with an absolute disbelief in those efforts and an unwillingness to learn the true state of affairs that he has to deal with every day was just shocking.”

The Washington Post first reported this anecdote from its inclusion in McCabe’s book, “The Threat: How the FBI Protects America in the Age of Terror and Trump,” where it quoted Trump dismissing the launch during a July 2017 briefing as a “hoax.”

When asked earlier in the week for comment about Trump’s North Korea comments, the White House did not respond.

Press secretary Sarah Sanders did generally blast McCabe’s book in a prepared statement, saying: “Andrew McCabe was fired in total disgrace from the FBI because he had lied to investigators on multiple occasions, including under oath. His selfish and destructive agenda drove him to open a completely basis investigation into the President.”

“His actions were so shameful,” Sanders continued, “that he was referred to federal prosecutors. Andrew McCabe has no credibility and is an embarrassment to the men and women of the FBI and our great country.”

McCabe was fired by then-Attorney General Jeff Sessions in March following an inspector general report that concluded he misled investigators about his role in directing other officials at the FBI to speak to The Wall Street Journal about his involvement in a public corruption investigation into the Clinton Foundation.

“There’s absolutely no reason for anyone and certainly not for me to misrepresent what happened. So no. Did I ever intentionally mislead the people I spoke to? I did not. I had no reason to. And I did not,” McCabe said on “60 Minutes” Sunday.

The Justice Department’s watchdog has referred his findings on McCabe to the US Attorney’s office in Washington for possible criminal charges. The case remains under investigation.