Shooter in deadly rampage was not supposed to own a gun, police say 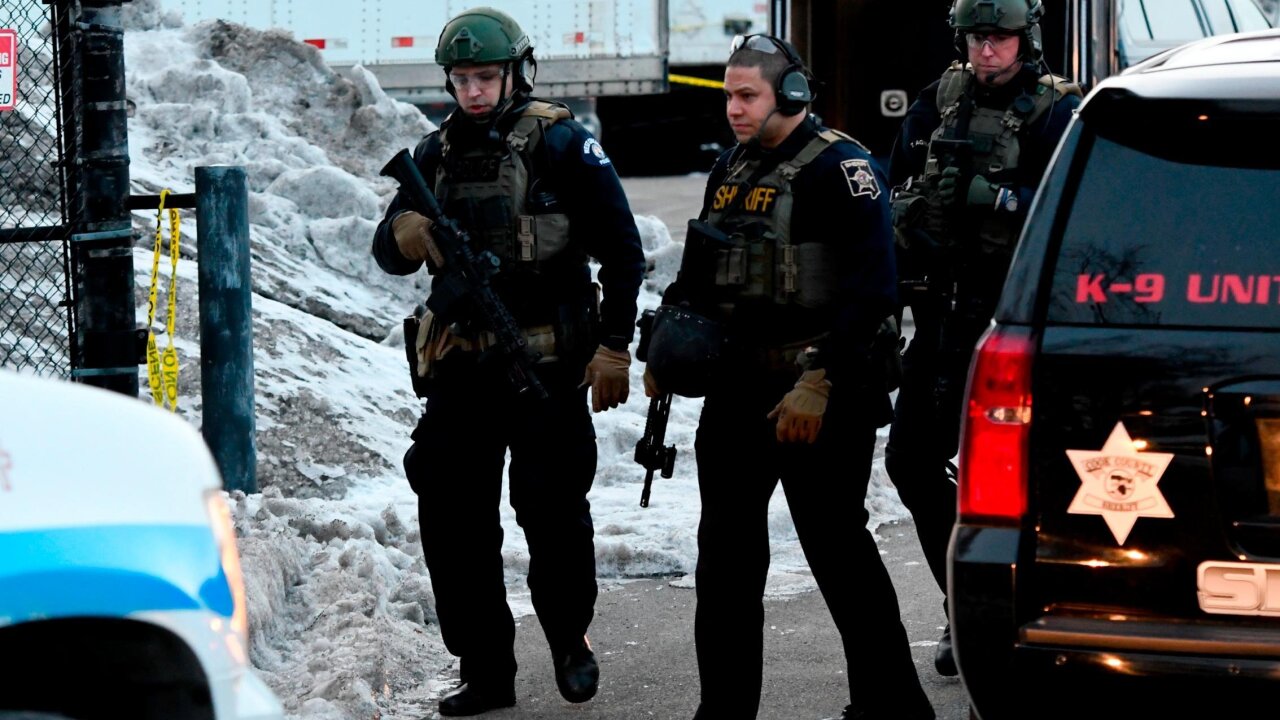 Law enforcement officers work at the scene of a shooting at the Henry Pratt Co. on Friday, Feb. 15, 2019, in Aurora, Ill.

(CNN) — Gary Martin took a gun into work Friday, a pistol he didn’t legally own.

The work day began as usual at 7 a.m. CT. That afternoon Martin was called to an office at Henry Pratt Co., a manufacturing business in Aurora, Illinois, a large suburb 40 miles west of Chicago.

While it is unknown whether Martin knew he was about to be fired, a company official said he had been going through a discipline procedure and he had been written up before.

After the termination meeting, Martin took out his pistol and began killing people, witnesses told police. He left the meeting room and kept firing as he went into the warehouse, where there were only a handful of employees.

All told, he gunned down a plant manager, a human resources manager, an intern on his first day, and two other workers. He wounded one other colleague.

He also shot at responding police, wounding five, before going into hiding in the back of the facility.

Martin, 45, died in a shootout after officers painstakingly went through the 29,000 square-foot warehouse.

Martin was a felon

Martin had a 1995 felony conviction in another state, Aurora Chief of Police Kristen Ziman said Saturday.

Martin’s conviction was flagged only days after he bought a handgun in 2014, and he was supposed to relinquish it, she said.

That pistol — and a laser sight — was used in Friday’s shooting, and now investigators are trying to find out why he still had it, she said.

“He was not supposed to be in possession of a firearm,” Ziman said.

The slain men included a plant manager and a college student

Police on Saturday released the names of the five workers killed at the industrial valve manufacturer’s 29,000-square-foot warehouse:

• Trevor Wehner of DeKalb, Illinois, a human resources intern and a student at Northern Illinois University.

The names of five wounded police officers and the wounded worker — all men — were not immediately released. Of the wounded officers, four were shot and one had shrapnel wounds, police said.

At least three of the officers still were being treated at a hospital Saturday morning, police said. None of the injuries was believed to be life-threatening.

Company: We’ll look at our shortcomings

Scott Hall, the CEO of Mueller Water Products, which owns the Henry Pratt Co., said the company has a progressive discipline process before someone gets fired.

“In order to be at the final step he would have been through previous steps,” Hall said. Martin was being terminated for the culmination of various workplace rules violations, he said.

Hall said Martin passed a background check when he was hired 15 years ago.

The company has begun to review every aspect of the tragedy, he said.

“We’re assessing if there is anything we could have done or could do in the future,” Hall said, adding that he was certain there were some shortcomings that would need to be addressed.

Hall said the wounded employee, who was one of nine people in the building where the shooting took place, would be released from the hospital Saturday.

The facility will be open Monday, but Hall said he didn’t think the employees would be working. He said counselors will be there.

‘He was just shooting everybody’

An employee told CNN affiliate WLS that Martin was “running down the aisle” with a pistol that had a green laser sight on it.

“As soon as I saw the green thing and heard the shots, we left,” said John Probst, who’s worked at the plant for 40 years. “He started opening up on the room, and he was just shooting everybody.”

Probst said one of the victims who ran out with his arm bleeding told him the gunman “went ballistic.”

All of the gunfire victims were apparently hit early on

Police officers arrived four minutes after the first call — and came under immediate fire from Martin, possibly from a window, police said.

One officer was hit outside, with others struck inside the building as they entered, Ziman said.

The shooting then stopped as Martin apparently hid deeper within the warehouse, setting off a hunt. More first responders entered the building with two missions — one group searched for Martin, while the other tried to find victims, she said.

The hunt ended about an hour and a half later. Officers found Martin in a rear machine shop; Martin opened fire and officers fired back, killing him, police said.

It appears that all who were killed or hurt by gunfire — except for Martin — were hit in the first few minutes of the incident, Ziman said.

A sixth officer suffered a minor knee injury and was treated at a hospital.

Police trying to figure out why gun wasn’t confiscated

How Martin obtained and kept his gun will be part of the investigation. Ziman revealed this Saturday about the timeline:

• Martin was convicted in 1995 in Mississippi of felony aggravated assault.

• In January 2014, Martin, then living in Aurora, was issued a firearm owner’s identification card, or FOID card.

• Five days later, he took possession of the gun, having passed a background check and a five-day waiting period.

• On March 16, 2014, he applied for a concealed-carry permit. During a background check process for this permit, his fingerprints flagged him for the 1995 conviction in Mississippi.

• After his felony conviction was discovered, his application for the concealed-carry permit was rejected and Illinois State Police revoked his FOID card.

State police sent him a letter telling him to voluntarily relinquish the weapon to police, Ziman said.

She said she doesn’t know why Martin ended up keeping the gun and whether law enforcement followed up with him.

“The … firearm purchase does not require fingerprint. There is a background check, but no fingerprint is required,” she said.

“As part of conceal and carry, that is when the fingerprint” is examined, she said.

Martin’s next-door neighbor, Mary McKnight, told CNN she wasn’t close with him but the two would say hi in passing at their Aurora apartment complex.

“He seemed very friendly. He said hi to a lot of people who came and went. I’m kind of shocked, I guess,” said McKnight, who said she moved into the complex over the summer. “I’m sad and shocked, and you kind of never know.”

Another neighbor, Jennifer White, told CNN affiliate WBBM she knew of him in part because she’d see him outside flying drones.

“He seemed perfectly fine. I’ve seen him out there with his drones,” she said. “He always kept to himself.”

Aurora is the second-largest city in Illinois, with a population of about 200,000 people.