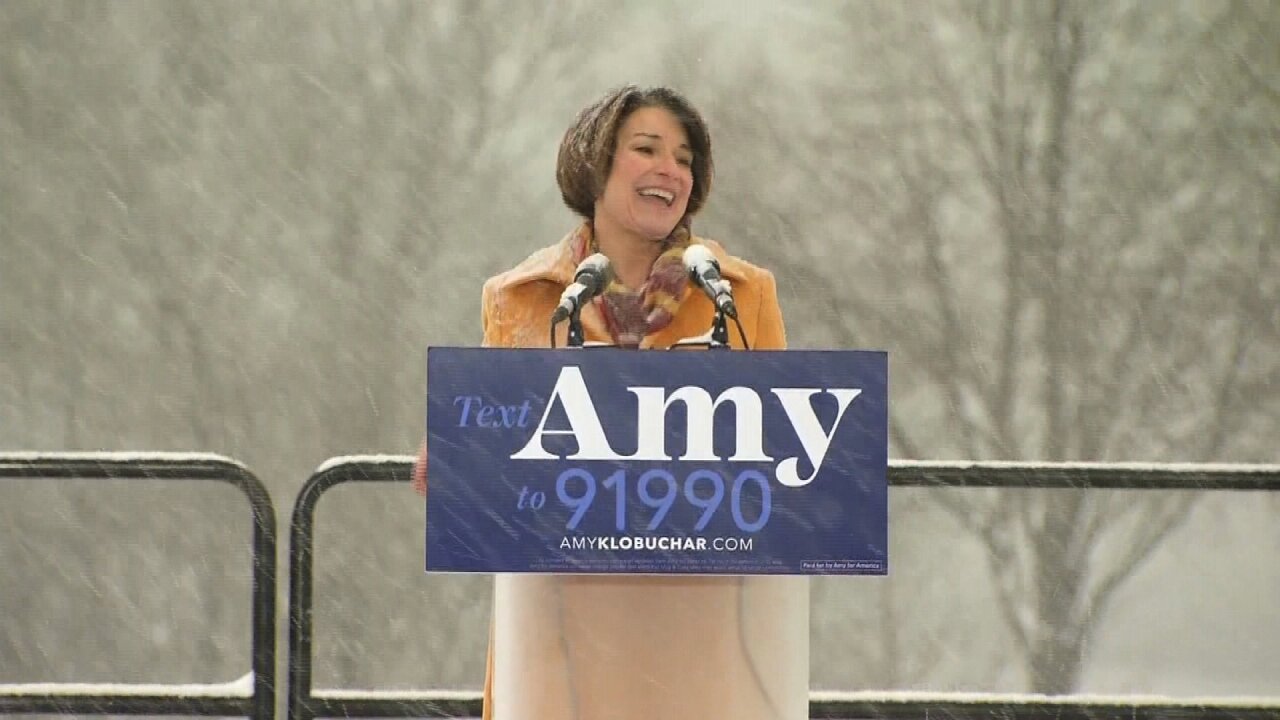 Sen. Amy Klobuchar announced her presidential bid at a snowy, freezing outdoor event on Sunday, vaulting the three-term senator from Minnesota into the crowded field of Democrats angling to take on President Donald Trump in 2020.

(CNN) — Sen. Amy Klobuchar announced her presidential bid at a snowy, freezing outdoor event on Sunday, vaulting the three-term senator from Minnesota into the crowded field of Democrats angling to take on President Donald Trump in 2020.

Klobuchar, with snow piling up around her and blanketing the thousands of people before her, cast herself as the product of working-class roots who can win bipartisan support and help Democrats win back the Midwestern cities and towns that drifted toward President Donald Trump in 2016. Throughout her speech, she pledged to take on issues like money in politics, climate change and election reform, and leaned heavily into her Minnesota roots.

“On an island in the middle of the mighty Mississippi, in our nation’s heartland, at a time when we must heal the heart of our democracy and renew our commitment to the common good, I stand before you as the granddaughter of an iron ore miner, the daughter of a teacher and a newspaperman, the first woman elected to the United States Senate from the state of Minnesota, to announce my candidacy for president of the United States,” Klobuchar said.

“I’m asking you to join us on this campaign. It’s a homegrown one,” she said. “I don’t have a political machine. I don’t come from money. But what I do have is this: I have grit.”

The senator also used the snow and freezing temperature to set herself apart from a crowded field of Democrats running in 2020.

Asked by CNN after the speech what set her apart from others running, Klobuchar looked around, “What makes me unique is I did this announcement speech in the middle of a blizzard and I think we need people with grit — I have that grit.”

In her speech, Klobuchar also took a swipe at officials in Washington, promising that her honesty will set her apart from them.

“I promise you this: As your president, I will look you in the eye. I will tell you what I think. I will focus on getting things done. That’s what I’ve done my whole life. And no matter what, I’ll lead from the heart,” she said.

The senator also went after Trump without mentioning him by name, criticizing the President’s foreign policy and use of Twitter.

“We need to stand strong — and consistently — with our allies. We need to be clear in our purpose. We must respect our front line troops, diplomats and intelligence officers … who are out there every day risking their lives for us … they deserve better than foreign policy by tweet,” she said.

It was clear early in Klobuchar’s remarks that her campaign will be centered on making inroads in the Midwest, an area of the country that has been wooed by Trump in recent years. Minneapolis and the nearby Mississippi River, which rolled slowly down the hill from where Klobuchar spoke, played a central role in the senator’s pitch.

“The Mississippi River, all our rivers connect us, to one another. To our shared story,” she said. “For that is how this country was founded, with patriots who saw more that united them than divided them.”

The setting also provided a clear example of how the senator hopes to run for president as a Minnesotan and Midwesterner.

Klobuchar’s uncovered head was covered in light snow by the end of her speech and snowflakes blanketed everything in front of her, from her eyelashes to the microphone she used to the pages of her speech that were enclosed in plastic covers.

Ahead of the event, snow blowers cleared the stage multiple times and volunteers were frantically working to shovel walkways for people. The skyline of Minneapolis was barely visible behind the stage and the banks of the freezing Mississippi River were covered in snow.

Klobuchar’s team planned for the event by ordering 100 gallons of hot cocoa and 100 gallons of apple cider. Volunteers handed out small American flags and packs of Little Hotties hand warmers as people entered the park. A small covered area to the side of the event had a roaring fire and a number of event attendees either cross-country skied or snow-shoed to the speech.

Most attendees were unfazed by the weather — and gave Klobuchar credit for announcing outside in February.

“It just truly represents Minnesota,” said Renee Anderson, a 22-year old from Bloomington. “If somebody doesn’t want to come to an event that is outside in Minnesota, do they really live here? Are they really excited?”

Scott Herzog, a 50-year-old manufacturer from West St. Paul, said the same as he stood in front of the stage two hours before the event started: “This is true Minnesota: Snow and Amy Klobuchar.”

And Lauren Noyes, who came to the event with her husband, David, and their twins Gabriel and Kiera, said the fact that Klobuchar kept the event on showed “grit.”

“She’s tough! She is showing her grit,” she said as her 9-month-old twins sat in sleds at her feet. “This tells me we are made from tough stuff.”

Klobuchar will follow her event in Minnesota with a trip to Iowa and Wisconsin next weekend and then another trip to Iowa on February 21, where she will speak at the Ankeny Area Democrats Winter Banquet and Fundraiser.

Klobuchar’s presidential aspirations have not been a secret to many in her home state and around Washington.

“She’s going to do it,” Minnesotan and former Vice President Walter Mondale told KFGO on Thursday. “I’m very positive that she will run and announce on Sunday. I think she’s got a real shot here.”

And Klobuchar told reporters in early January that she was “getting close to a decision” about running for president in 2020.

“I’m continuing to talk to people about it,” she said.

People close to Klobuchar told CNN she plans to run as a deal maker who is able to get things done when things need to get done. She will cast herself throughout the campaign as the granddaughter of rural America, someone whose life was helped by a grandfather who saved money in a coffee can to send her father, who would go on to become a journalist, to college.

Klobuchar’s team believes there is an opening in the Democratic primary for someone who is able to relate to voters in Iowa because of her local ties, but is also able to talk to Democrats eager to beat Trump in 2020 as well as win back Trump voters.

That is where Democrats believe Klobuchar’s electoral record will factor in: The senator has consistently overperformed against other Democrats in Minnesota, winning her three terms in office by an average of 26 percentage points.

“All Amy Klobuchar does is win,” said Minnesota Gov. Tim Walz when he introduced Klobuchar.

Klobuchar won re-election in 2018 with 60% of the vote. She visited all 87 Minnesota counties during the campaign, including 42 that went for Trump in 2016. This win helped burnish Klobuchar’s credibility with rural and lean-Republican voters and will likely be the backbone of her campaign.

“She could surprise pundits here,” said Matt Paul, Hillary Clinton’s Iowa state director during the 2016 caucus. “She’s a neighbor, has long been working to elect Democrats in Iowa and established herself as a Democrat who gets things done.”

Klobuchar has a liberal voting record but is not considered as liberal as other candidates running for president or considering a 2020 run. Klobuchar does not support abolishing the Immigration and Customs Enforcement agency or Vermont Sen. Bernie Sanders’ Medicare-for-all bill — instead pushing to lower the age when people are allowed to buy into the government health care program.

Some Democrats question whether her more moderate voting record — she supported, for example, Trump’s nominations of Wilbur Ross, Mike Pompeo and John Kelly and a host of other nominees — is left enough to succeed in a Democratic primary. According to FiveThirtyEight’s congressional vote tracker, Klobuchar voted with Trump’s interests 31% of the time since he took office.

Klobuchar has also been dogged in the days leading up to her campaign launch by a series of headlines about how she treats her staff poorly and creates a hostile work environment.

In a not-so-subtle nod to those stories, one of the first things Klobuchar did from the stage was thank her staff for putting on the event.

And when asked about the stories after the event, the senator admitted that she can be tough on people.

Born in Plymouth, Minnesota, Klobuchar returned to her home state after attending Yale University and getting her law degree at the University of Chicago. She began her career in private practice before being elected narrowly as Hennepin County attorney in 1998. She was re-elected with no competition in 2002.