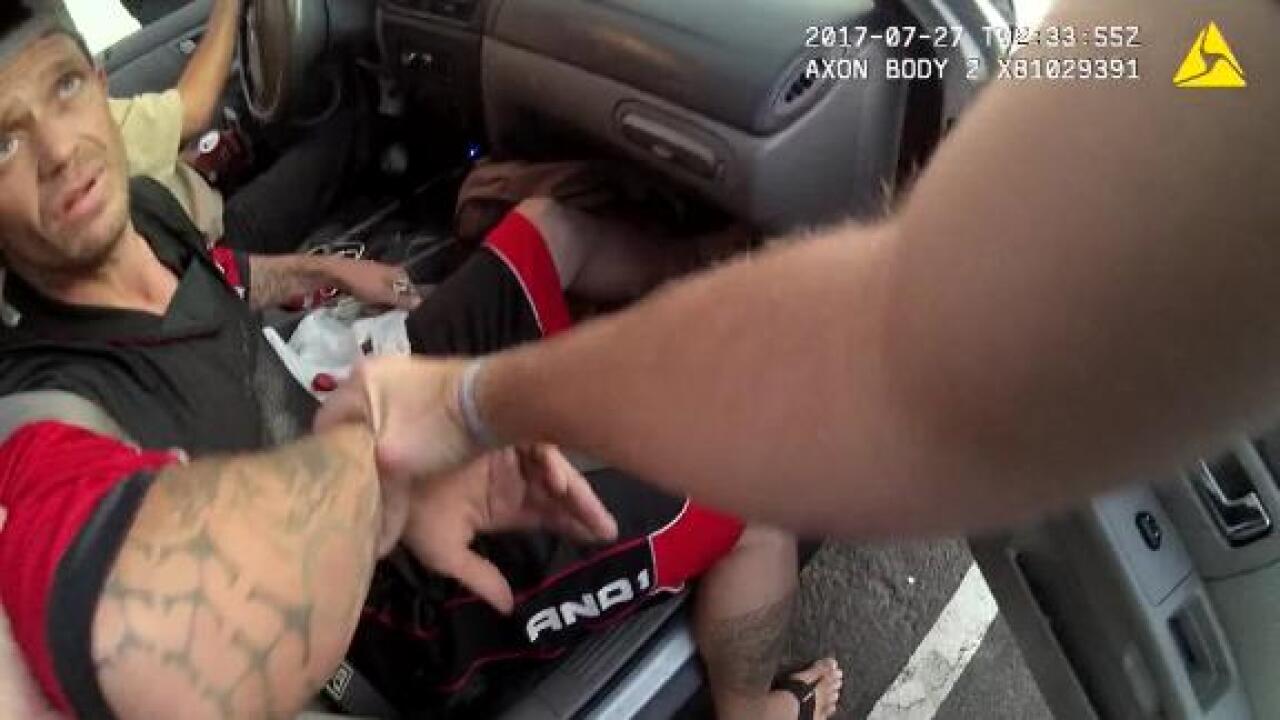 (CNN) — Johnny Wheatcroft is entangled in his seat belt the first couple of times Glendale, Arizona, police use a Taser on him.

By the end of the video, Wheatcroft’s pants are down, his kids are screaming and an officer appears to have the Taser on or near Wheatcroft’s genitals as he threatens to use it on him again.

Wheatcroft last year sued the officers and the city over the July 2017 incident, and video obtained by CNN last week shows the altercation.

The Glendale Police Department said in a Friday statement that Wheatcroft’s wife, Anya Chapman, who was in the back seat, swung a bag of bottled drinks at Officer Mark Lindsey, knocking him out. The couple’s children, ages 6 and 11, and the driver, family friend Shawn Blackburn, were also in the car.

Video from a parking lot surveillance camera that shows Lindsey being injured captures three officers surrounding a silver Ford Taurus. A white bottle flies out of the back seat, hitting Lindsey, who grabs his forehead and falls backward out of view, below the open passenger door.

Wheatcroft, police said, reached his hands into a backpack, raising officers’ suspicions. He then repeatedly resisted officers’ attempts to remove him from the car, they said.

“For the safety of themselves and those around them, including the minor children, the officers attempted to remove Mr. Wheatcroft from the vehicle so they could maintain a safe eye on him for the duration of the traffic stop as well as conduct a pat down for weapons,” the Glendale police statement said.

CNN’s attempts to reach the officers were unsuccessful.

‘I’m not doing nothing, bro’

According to Wheatcroft’s federal lawsuit, which alleges multiple rights violations, Wheatcroft and Chapman arrived at a motel the evening of July 26, 2017, and intended “to reserve a room so they could enjoy some family time together.”

When officers Matt Schneider and Mark Lindsey pulled up, the lawsuit says, there was no probable cause to suspect they were doing anything illegal. Schneider asked the occupants for identification, and when Wheatcroft asked why that was necessary, Schneider threatened to take him into custody, the lawsuit alleges.

Officers try to pull him from the car, but Wheatcroft still has his seat belt on. An officer fires a stun gun into Wheatcroft’s lower back and then again in the middle of his back before handcuffing him, the video shows. After Wheatcroft is handcuffed, an officer places the Taser between his shoulder blades and fires it again, it shows.

Wheatcroft falls out of the car. His kids and wife are screaming, as is Wheatcroft, who is still wrapped in the seat belt.

“Ow! Ow!” he cries, sitting on the ground, wedged between the car and the passenger door.

The bodycam shows the officer back up, take aim and fire the Taser once more. Wheatcroft screams again. The officer’s outstretched arm blocks the bodycam’s view, but the sound of another Taser — that of officer Michael Fernandez, according to the lawsuit — can be heard again.

“Turn over, motherf***er,” an officer orders.

As officers fight for Wheatcroft’s hands, Chapman leans between the front seats and says, “He’s not going to do nothing.”

‘You hit him in the head’

“You hit him in the head,” an officer replies.

Wheatcroft, who is still standing at this point, interjects, “No, no she didn’t. She didn’t mean to.”

A boy in the back of the car climbs between the front seats to free his father from the seat belt. Schneider turns the Taser toward the boy and quickly lowers it, the video shows.

Burying his face into the seat, the boy continues crying as his father screams and his mother pleads with police.

“Mark’s hurt. He got hit in the head by her. We need to get her in handcuffs right now,” an officer can be heard saying on the body camera.

As another officer takes Chapman into custody, the boy tells police, “She didn’t mean to. Please don’t take my mommy.”

After Fernandez “slammed” Wheatcroft face first on the hot asphalt, the lawsuit says, Schneider Tased him and kicked him in the groin.

An officer can be heard off camera accusing the handcuffed Wheatcroft of kicking and resisting. Schneider’s bodycam turns toward Wheatcroft, who is on his face. One of his legs is flailing.

Amid the scuffle, Schneider’s bodycam captures the officer pulling down Wheatcroft’s shorts, placing the Taser between his exposed upper thighs and firing.

Two officers appear to be trying to restrain Wheatcroft’s upper body, and the man can be heard crying, “Ow! Ow! Ow! My elbow! My elbow!”

According to the lawsuit, “Wheatcroft was prone and handcuffed on the ground when Defendant Schneider pulled down Plaintiff’s shorts and Tased his testicles and perineum, which was significantly and excruciatingly painful,” it says.

The video shows Schneider placing the Taser on Wheatcroft’s exposed skin below his shirt and saying, “Keep fighting, you’re going to get it again. You want it again? Shut your mouth. I’m done f***ing around with you.”

According to the lawsuit, “At this same time, one of the officers placed a handgun to Plaintiff Johnny Wheatcroft’s head” — which is not clear form the video.

As they pulled the Taser prongs from Wheatcroft’s body, he screamed more, the lawsuit says. Schneider told him, “Stop being a big baby,” the lawsuit alleges.

Treatment was ‘depraved, vicious and evil’

The lawsuit says Wheatcroft committed no crime before he was approached, posed no threat and did not resist arrest, while officers are accused of failing to establish probable cause before using excessive force.

“The assault and battery of Plaintiff Johnny Wheatcroft was unlawful, unprovoked, unwarranted, unjustified, callous, depraved, vicious, and evil. There was no reason for Defendants Schneider, Lindsey, and Fernandez to torture this vulnerable man,” the lawsuit says.

Wheatcroft, who is now serving time in a state prison on an unrelated burglary conviction, suffered “devastating injuries and emotional trauma,” while his wife and kids suffered “severe psychological damage,” says the lawsuit, which seeks compensatory and punitive damage, plus attorneys’ fees.

When police approached, it says, Wheatcroft reached “down below the seat into a backpack,” refused to comply with officers’ demand and declined to identify himself. When police tried to take him into custody, Wheatcroft repeatedly resisted, and after officers warned him they would deploy their stun guns, he “continued to argue, yell and physically resist the officers’ control holds,” according to the police statement.

Feeling threatened after seeing his colleague knocked out, Schneider used a Taser on Wheatcroft and called for backup, it says.

“As multiple officers arrived on scene, they tended to the injured officer and helped detain Mr. Wheatcroft as he was continuing to resist officers by kicking and screaming,” police said.

The officers found a “usable quantity of methamphetamine” in the car, and Chapman later pleaded guilty to aggravated assault, according to the police statement.

“Per department protocol,” the statement says, “a review of the officers’ actions has been performed and discipline implemented regarding certain tactics used by one officer.” It does not elaborate.

Though the lawsuit claims officers did not provide medical care to Wheatcroft or photograph his injuries, the police statement says Wheatcroft refused medical attention. Lindsey was treated at a hospital and returned to duty several days later, police said.