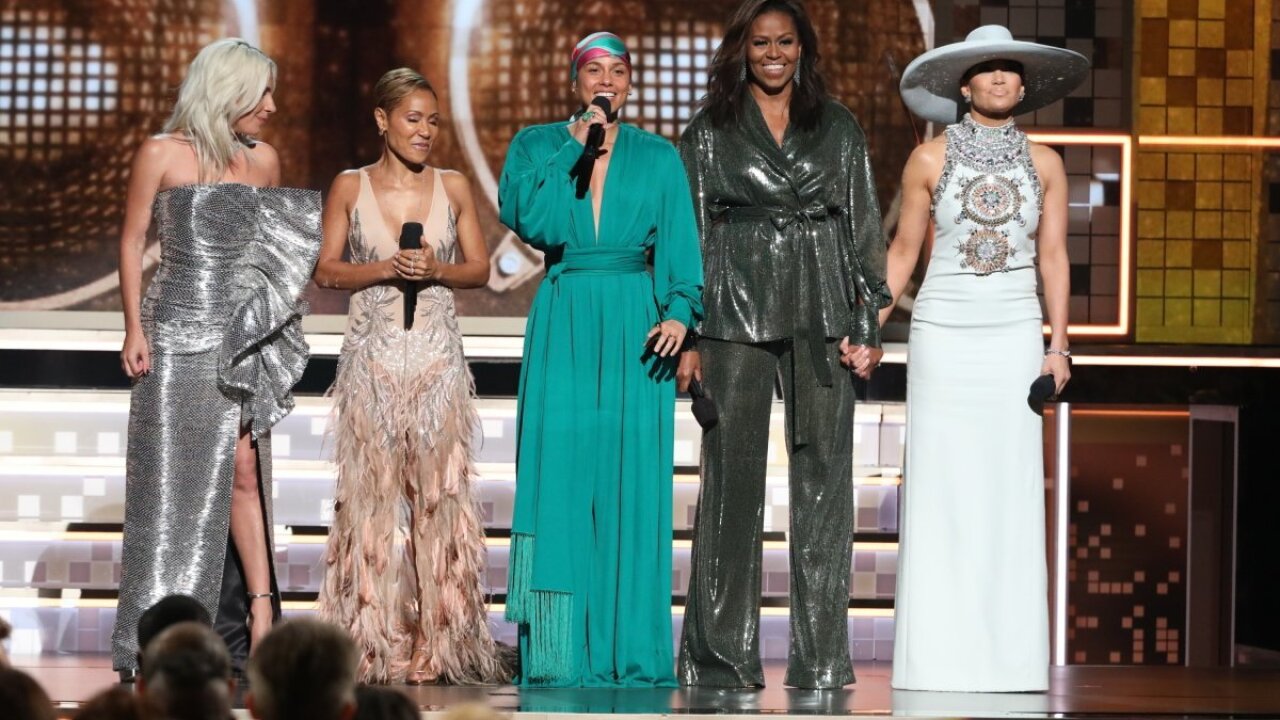 (CNN) — Grammys host Alicia Keys got a little help from some big names to help her open the show.

Obama, who got a rousing applause from the crowd, so much so that she had to pause saying her lines and restart once it calmed, said music “fueled” her through the last decade.

“Music helps us share ourselves — our dignity and sorrows, our hopes and joys,” Obama said. “It allows us to hear one another, to invite each other in. Music shows us that all of it matters — every story within every voice, every note within every song.”

Keys said the night was about celebrating “the greatness in each other.”

After her appearance, Obama said on Twitter that “a big part of friendship is showing up for your girls — that’s why I was thrilled to be there for the one and only @aliciakeys at the #GRAMMYs.”

Even before the Grammy Awards ceremony started, Lady Gaga proved how great she is with two wins.

The singer won an award for best pop solo performance for “Joanne” as well as best song written for visual media for “Shallow” from her Oscar-nominated film “A Star is Born.”

She also won the first award of the night, best pop duo/group performance, for “Shallow,” which she performed with Bradley Cooper.

Lady Gaga used that moment to address mental health, which is a major subject of “A Star is Born.”

“A lot of artists deal with that, and we have to take care of each other,” she said.

On Twitter earlier in the night, the singer joked that she was “not gonna be able to wear any makeup tonight” because of her joy-filled tears.

“We just won our first of Grammy nominations for the night. I’m in tears with honor and gratitude,” she wrote on Twitter after her first win.

After her second, for the song named after the superstar’s aunt, Lady Gaga called the award “more than me & my family could ever dream of.”

“I sang that version in one take, & poured my entire life & soul into it,” she wrote. “Thank you so much for this gift I am completely shocked.”

Kacey Musgraves, Childish Gambino, Brandi Carlile and Ariana Grande, who will be a no-show this year, were also among the pre-ceremony winners.

Childish Gambino also later won “Song of the Year” for “This Is America.”

Heading into music’s biggest night, rap artists Kendrick Lamar and Drake topped the nominations, with eight and seven, respectively. But it was female artists who dominated nominations in the top categories.

The Grammys this year expanded the major categories of album of the year, record of the year, song of the year and best new artist from five nominees to eight, some say in response to the lack of diversity among nominees in previous years.

A tribute to the music of Dolly Parton stood out as one of the most soulful moments of the show. Parton joined Katy Perry, Kacey Musgraves, Maren Morris, Cyrus and Little Big Town for a medley of her hits, culminating in a performance of “9 to 5” that got the Grammys crowd on their feet and singing along.