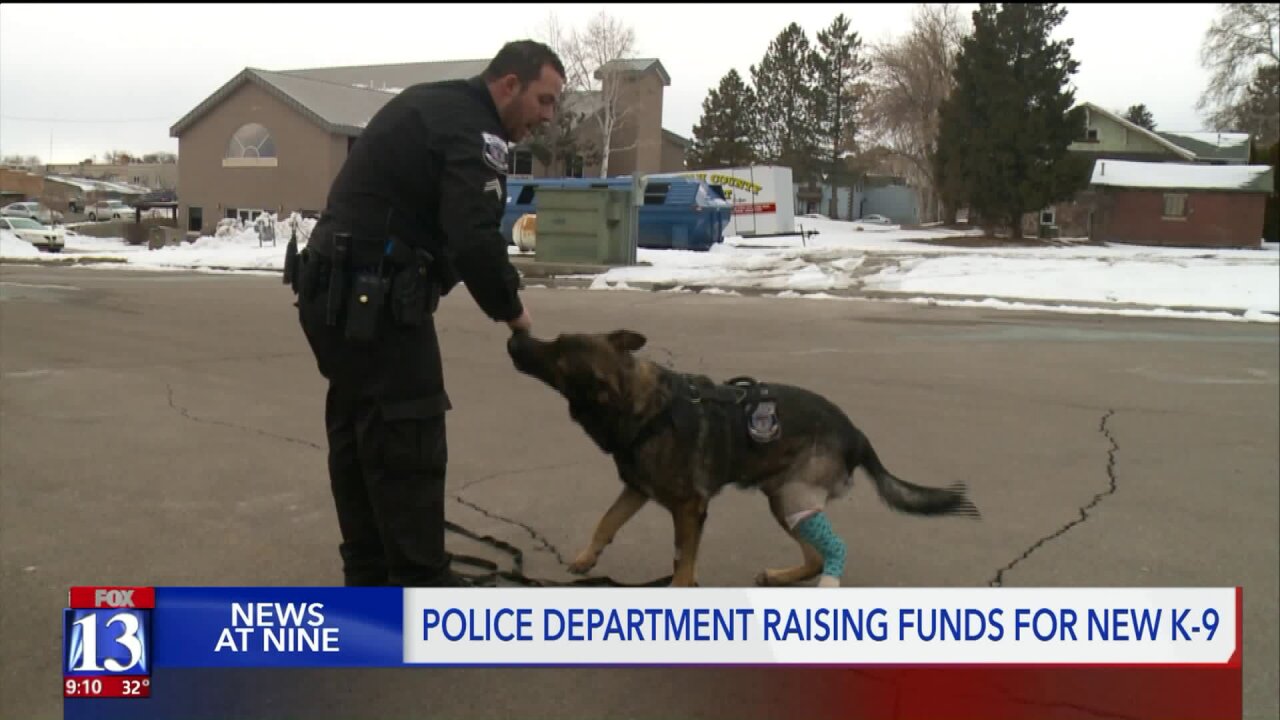 “Things that we wouldn’t be able to do just as officers, our K-9s are able to help us out with that,” said Pleasant Grove Police Department Corporal, Skyler Winder.

For the last four years, the German Shepherd has aided the department in both apprehension and narcotics detection

“He’s trained to search for various types of drugs like marijuana, heroin, cocaine and meth,” Winder said. “Whether it’s in vehicles or in houses, he finds them.”

Sadly, about three and a half months ago, this super dog suffered a career-ending injury. He was recovering from an ear surgery when he tried to escape from his kennel and suffered a broken leg. It was a compound fracture that broke through the skin and led to months of challenges and infections – his leg now needs to be amputated, the surgery is scheduled for Monday.

“He’ll be out of pain,” Winder said. “With it being the back leg, he’ll lose some agility and some balance but other than that he gets along with it just fine.”

With only three legs, Havoc will no longer be able to be used as a police K-9, but the department says having the dog is an asset that they can’t afford to lose.

“A huge asset,” Winder said. “Whether their heightened sense of smell, their training… there’s a lot of things that they pick up on that I would never be able to pick up on.”

However, buying and training, a new K-9 officer isn’t cheap.

“To start a new dog and outfit your car you’re looking anywhere from 15 to probably 20 thousand dollars,” said Winder. “It’s a very expensive program, but it’s a very rewarding program.”

The department has set a goal to raise $25,000 to pay for a new dog and the needed gear.

They plan to work to raise the funds over the next year through a series of sponsorship and events, like a golf tournament.

“We’ll get a new handler in, a new dog and get going and be able to keep Pleasant Grove safe and keep trying to get drugs off the streets,” Winder said.

And while havoc may be going off duty…

“He’s a good dog, super good dog. It sucks that he has to retire, but you know he did a lot of good work in the four years that he ran,” said Winder.

He will always have his buddy in blue.

“Me and him are super close,” Winder smiled. “I do want to keep him. He’s my buddy, I mean for the last two years I’ve spent pretty much every single day with him.”

Winder said handlers usually get to keep their K-9s after the dog is retired.