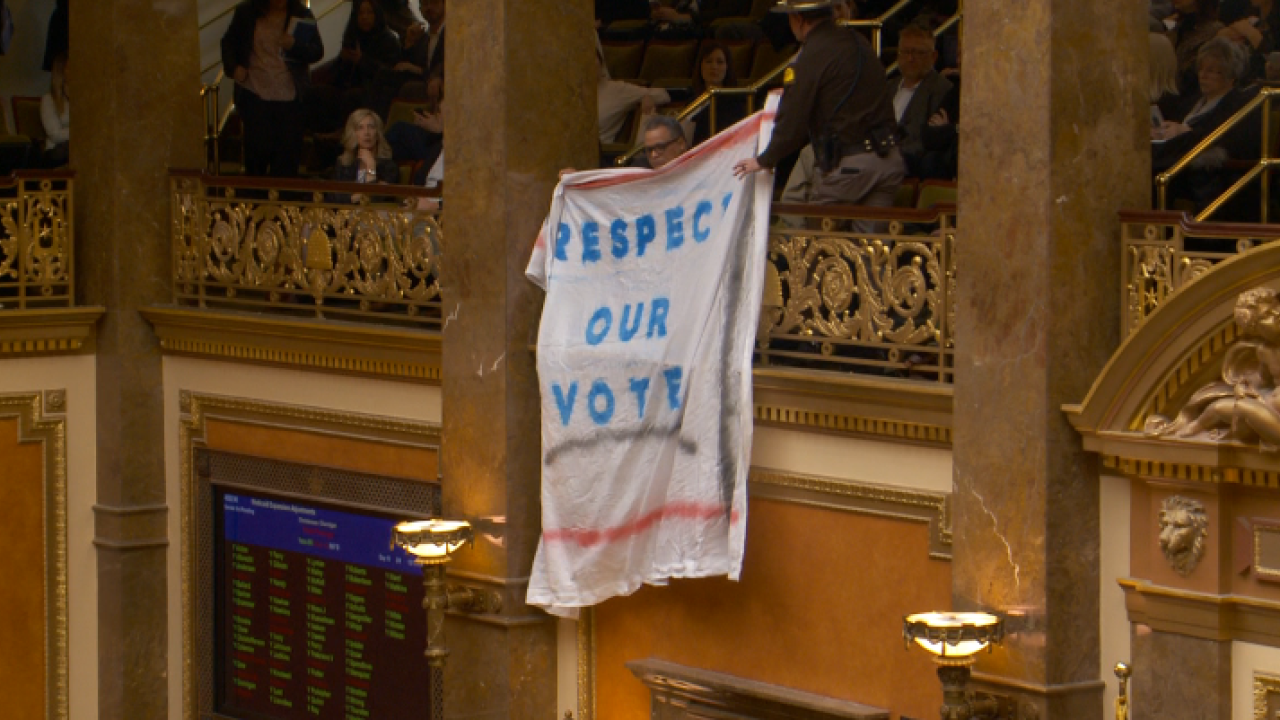 A demonstrator in the House chamber during the vote on Senate Bill 96. (Image by Manuel Rodriguez, FOX 13 News)

In a 56 to 19 vote, Senate Bill 96 passed the House. It will return to the Utah State Senate because it has been amended.

A demonstrator in the House chamber during the vote on Senate Bill 96. (Image by Manuel Rodriguez, FOX 13 News)

The vote came during protests inside and outside the House chamber. As lawmakers were voting, a man dropped a banner over the railing reading "Respect our vote." He shouted that same slogan as Utah Highway Patrol troopers escorted him out.

"Lobbying our legislature to embrace prop 3, to expand Medicaid to take care of the poor among us and they have just refused!" Rev. Curtis Price of the First Baptist Church of Salt Lake City, who blockaded the House chamber doors, told FOX 13.

The group Americans For Prosperity organized a counter-demonstration outside the House chamber chanting "freedom" when lawmakers approved SB96.

"We were able to provide coverage for those in the coverage gap while also protecting those who, protecting our budget," said AFP Utah's Heather Williamson. "Protecting taxpayers."

No one was ultimately arrested.

Inside the chamber, the House debated the bill that replaces Prop. 3, which passed in November with 53% of the vote. Lawmakers fear that what voters approved, and the sales tax hike that goes with it, is not enough to cover ballooning costs.

SB96 implements enrollment caps, a work requirement and seeks federal waivers on how much the state has to pay. But the bill was also amended on Friday morning with a friendlier version added in. Rep. Ray Ward, R-Bountiful, who sponsored a competing bill, said the amendments would provide expanded coverage if the Trump administration does not grant the waivers GOP leaders think they'll get. It would allow full expansion -- up to 138% of the federal poverty level -- as the last resort.

"There is still a plan to get those people coverage independent of what the federal government decides. I know we have our hopes for what they’ll do, but we’ve been disappointed before," Rep. Ward told reporters.

Democrats were still skeptical and tried repeatedly to swap out the bill with their own versions, which were rejected. House Speaker Brad Wilson, R-Kaysville, told reporters on Friday that he believes what ultimately passed will provide coverage without busting the budget.

"There is a path I think we’re on to provide coverage for everyone. But do it in a way that will create the opportunity to manage the budget so it’s more sustainable long term," he said.

Senate Republicans were expected to approve the bill in a vote Monday. Senate Democrats said they would review the changes to the bill to decide whether to support it, but indicated they were amenable to some of the friendlier reforms.

"Our issue is to make sure the spirit of Prop. 3 is upheld," said Sen. Derek Kitchen, D-Salt Lake City.

The backers of Prop. 3 were still incensed by the vote. Because it has so far passed with more than a two-thirds majority, it may be referendum-proof. But Prop. 3's sponsors have not ruled out litigation.

"This vote is a shocking display of disrespect for Utah voters," said Utah Decides Healthcare in a statement. "This bill eliminates coverage for tens-of-thousands of Utahns in need and leaves billions of our tax dollars in Washington. This is not what we voted for."

In a lengthy statement, Governor Gary Herbert defended SB96 but did not explicitly say if he would sign it into law.

"I do not accept the characterization that SB 96 ignores the will of the people. I see this as a thoughtful effort to implement the will of the people to care for the poor with quality health care with the added benefit that it can be sustained over the long term with no reduction in other important social services," he wrote.