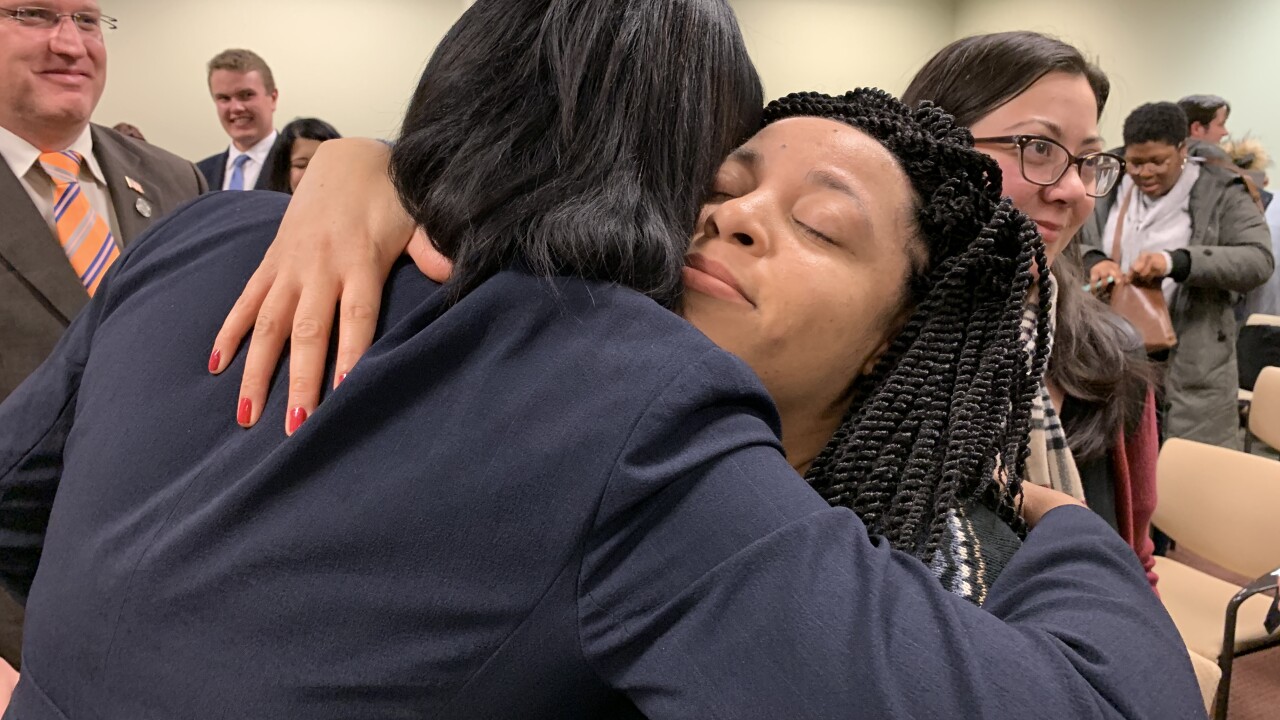 Rep. Sandra Hollins, D-Salt Lake City, (left) is hugged by a supporter after her resolution to remove slavery from the Utah Constitution passes. (Photo by Ben Winslow, FOX 13 News)

SALT LAKE CITY — A bill to remove slavery from the Utah Constitution has passed out of a House committee.

The House Judiciary Committee voted unanimously to support Rep. Sandra Hollins’ House Joint Resolution 8. It came after an emotional hearing with people urging the Utah State Legislature to strike references to slavery and involuntary servitude from the state’s founding document.

After it passed, people in the packed committee room burst into applause and rushed to hug Rep. Hollins, D-Salt Lake City.

Rep. Hollins had bipartisan support for her bill. Former state senator and Utah Republican Party chairman James Evans said it was time the language was removed.

“In the United States of America, in 2019, there’s no reason to have any reference of slavery or involuntary servitude,” he told the committee.

Lex Scott, who heads Black Lives Matter in Utah, called for lawmakers to remove the words.

“It is an ugly thing. It needs to be removed immediately,” she told the committee. “It’s time we erased that and any other racist monument in the state.”

While not enforced, slavery and involuntary servitude remain on Utah’s Constitution “except as a punishment for crime, whereof the party shall have been duly convicted, shall exist within this State.”

Rep. Hollins said she hoped it was the start of more positive changes.

“I’m hoping this would be a platform, the start of what we can use moving forward in our state to start working on other issues to bring us together,” she said.

Some members of the committee were stunned it still remained on the books.

“You bringing this allows us to be a part of that self awareness in moving forward. We owe you a debt of gratitude,” said Rep. Lowry Snow, R-Santa Clara.