Teen who walked while on life support is home from hospital 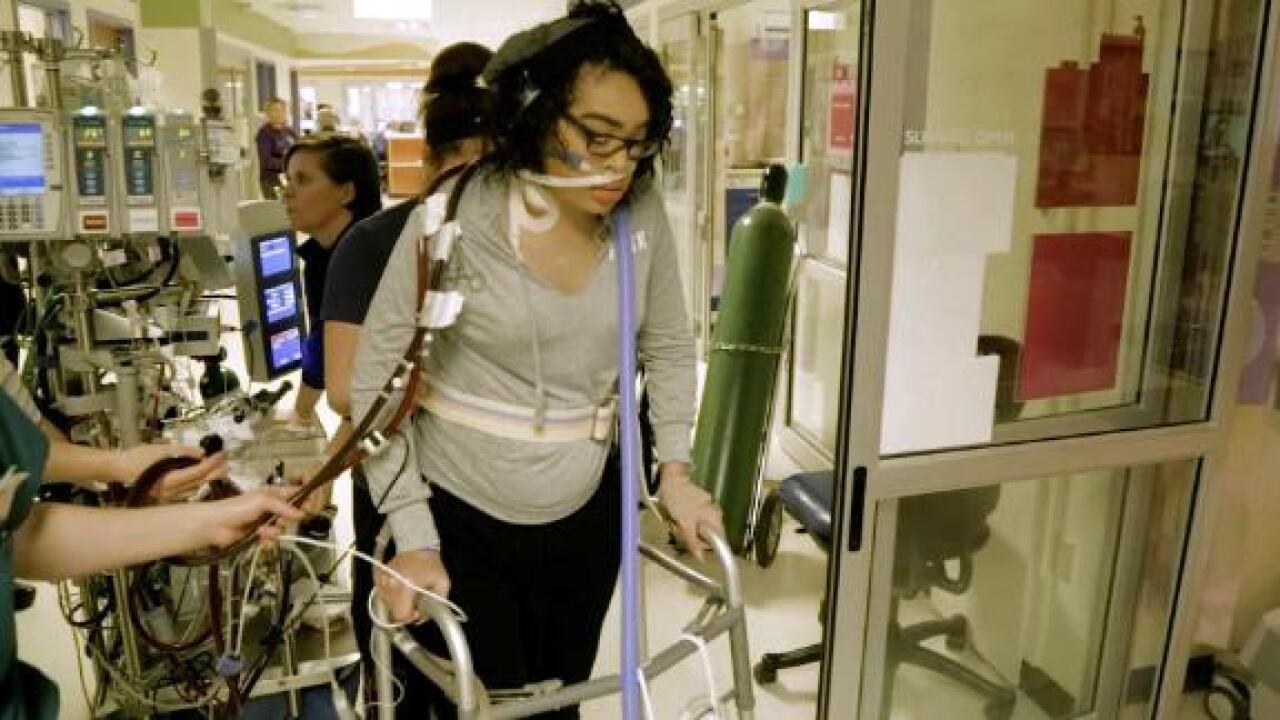 (CNN) — For the past 467 days, Zei Uwadia has been hospitalized on life support — but that hasn’t kept the quiet-natured teenager from walking, eating her favorite foods or even doing planks as exercise.

Now, with determination and strong-willed attitude, the student at North High School in Wichita, Kansas, is happy to finally be home.

“It helps a lot to have a goal in mind and just use that to motivate you and remember that you will get better; nothing’s permanent,” Zei said.

She arrived home on Thursday, the day before her 17th birthday.

Zei’s mysterious medical journey began in October 2017, when she had difficulty breathing, desperately gasping for air. Her lungs were failing, but no one knew why.

As Zei’s symptoms became more alarming, her mother, Brie Kerschen, took her to see an emergency physician. Zei was admitted to Via Christi Hospital St. Francis in Wichita. Then, on Halloween 2017, a medical flight transferred her to Children’s Mercy Hospital in Kansas City.

Doctors performed several tests to determine what could be causing the otherwise healthy teen to suffer, and they found clues that her symptoms might have been part of a severe allergic reaction to the common antibiotic Bactrim.

Before being hospitalized, Zei was taking the antibiotic for an unrelated kidney infection, her mother said.

“I don’t know if we’ll ever be able to 100% prove it, but we have included her in a series of five patients that have all had reactions to antibiotics and had severe pulmonary failure,” said Dr. Jenna Miller, a pediatric intensivist at Children’s Mercy Hospital who has been working on Zei’s case. She added that the five cases were specifically Bactrim reactions.

The hospital has submitted the physicians’ findings to be considered for publication in a medical journal.

Walking while on life support

At Children’s Mercy Hospital, Zei paced the halls while tethered to an extracorporeal membrane oxygenation, or ECMO, machine that helped her breathe and kept her alive.

The machine, often called the “highest form of life support,” uses a pump to circulate a patient’s blood through an artificial lung. The artificial lung adds oxygen and removes carbon dioxide before the blood is returned to the patient.

In other words, ECMO helps provide oxygen to a patient while giving their lungs or heart time to rest and heal.

The national survival rate in the United States among neonatal and pediatric ECMO patients is about 72%. At Children’s Mercy, where more than 800 patients have been on ECMO, the rate is about 78%.

Zei was the hospital’s first patient to sit up, stand and walk while on ECMO.

“We all just believed she could get better — and her mom and she believed it,” Miller said. “I think that was very powerful for everybody.”

Zei’s case remains unusual, and not all ECMO patients can expect a similar prognosis, but her story has inspired patients and physicians around the world.

She was on ECMO support for 189 days, Miller said. ECMO use for more than 100 days is rare.

There have been conflicting reports of the longest ECMO run overall in pediatrics, but at Johns Hopkins Medicine in Baltimore, a pediatric burn patient spent 551 days in between ECMO and using a ventricular assist device, possibly setting a record.

“What I recognize now is our situation, as difficult as it was, is not as unique as I would have thought,” Kerschen said.

“I’ve been living in the hospital with Zei for 456 days, and most of the time, this hospital is full of other parents and kiddos that are going through the same thing,” she said. “So now I find that there is a tremendous amount of suffering in the world most of the time for most people. … That doesn’t mean you can’t be happy at the same time and have periods of joy, which is how we survived it.”

‘There’s no medicine that can replace Zei touching home’

Seeing her daughter walk was a sign of hope for Kerschen.

“She started exercising more, and then she started pushing herself harder than she had, and then eventually she started beating us in her plank challenges. She planked for a minute and a half on a ventilator life support — beat her mom,” Kerschen said, laughing at the memory of her daughter defeating her at planks.

“That was around September,” she said. In early January, she was told that her daughter was on track to go home.

“The hospital saved our lives, no doubt, but at this point, there’s no medicine that can replace Zei touching home and what that’s going to do for her spirit,” Kerschen said.

Although she no longer will be on the ECMO machine, she will be connected to an at-home ventilator, Miller said, and she will return to the hospital monthly for steroid infusions.

Looking ahead, Miller said, the first goal in Zei’s care would be to make sure she improves to the point where she does not need a lung transplant. Then, the second goal would be for her to improve enough that she no longer needs a ventilator.

“The amount of work that everyone put in, including Zei, to help get her to this place has really been something that we have not done before, and it really took a lot of dedication on everyone’s part,” Miller said.

“Everyone is really committed, has been committed and remains committed to try to keep her home,” she said. “It’s a large undertaking for everyone involved.”

Zei’s family also has been installing additional railing and other items in their home to help her navigate stairs and other spaces.

“This is a very big and celebratory moment. It’s everything we’ve been waiting for, but I know for her, it’s not the life we left,” Kerschen said.

On Tuesday, Kerschen took Zei out in her car for the first time, in preparation for her homecoming and the logistics involved with continuing her care outside of the hospital. She then noticed that this might not be the homecoming Zei had originally pictured.

“We came back, and she sat down on the bed … and she just said, ‘I think it might be a little depressing,’ ” Kerschen recalled.

“I just wanted her to know that that was OK, and that doesn’t mean we’re not going to be really happy too, because you can carry the happiness and the sadness at the same time,” she said. “It’s OK to be happy even when you’re going through it.”

When Zei arrived home on Thursday, she was thrilled not only to be reunited with her two younger siblings but to get acquainted with her newly remodeled room.

The Make-A-Wish Foundation contacted Zei and her family last year to grant her wish while she was battling illness. This year, it was decided that the wish would be a bedroom makeover.

“Part of the benefit of this has been, over the past month, it has been a nice distraction for her to kind of dream about what her room would look like, pick out things and communicate with them,” Kerschen said.

Zei now gets to enjoy reading, resting and applying her glam makeup — one of her favorite hobbies — in a brand new bedroom.

Zei also plans to continue her studies through an online program at her high school.

As she starts her new life at home, she will be remembered at Children’s Mercy Hospital as the girl who walked.