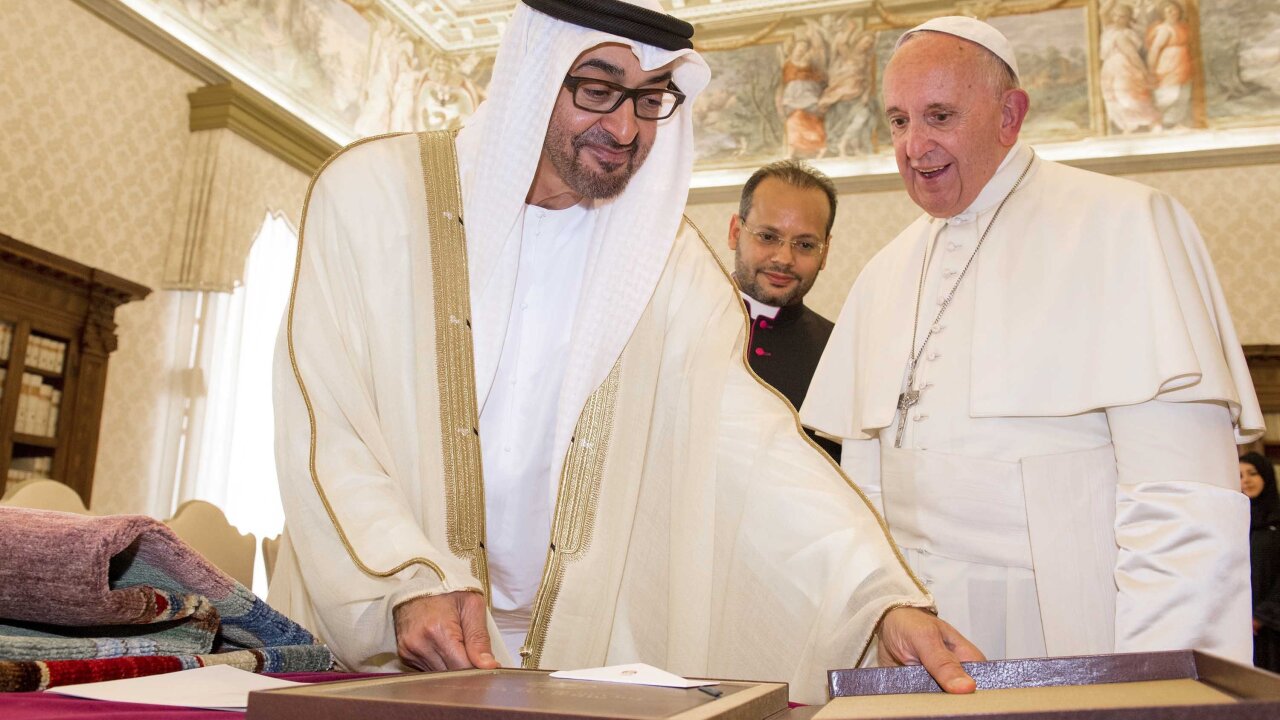 (CNN) — Pope Francis is set to arrive in the United Arab Emirates on Sunday night, making him the first pontiff to visit an Arab Gulf state.

In a video address from the Vatican on Thursday, Pope Francis said the trip marked “a new page in the history of relations between religions, confirming that we are brothers and sisters, even though we are different.” The overwhelming majority of Emiratis are Muslim, but the country hosts a large expatriate population, some 1.2 million of whom are Christian.

The majority of the UAE’s Christians are Indians and Filipinos.

The pontiff will spend three days in the UAE’s capital, Abu Dhabi, where he will attend an interreligious conference with Jewish and Christian leaders. The trip culminates with a papal mass at the Zayed Sports City, expected to be the single largest gathering the country, with about 135,000 attendees.

An hour before leaving on his historic trip, the Pope prayed publicly for the “exhausted, hungry” victims of the war in Yemen.

“The population is exhausted by the long conflict and many, many children go hungry, but it is not possible to reach the food deposits,” Francis said in his weekly Angelus address at the Vatican.

“I appeal to those involved and to the international community to urgently work towards the observance of the agreed-to accords, to ensure the distribution of food and to work towards the good of the population,” he said.

The Pope then added an additional plea off the cuff, not included in his prepared remarks: “Let us pray loudly because there are children that are hungry, are thirsty, don’t have medicine and their lives are in danger. Let us hold onto this thought.”

The UAE has declared Tuesday a holiday for invitees to the mass.

It is Pope Francis’s seventh visit to a predominantly Muslim country, signaling a continuation of improving ties between the Vatican and the Islamic world. The Pope has sought to build bridges with the Muslim world by refusing to equate Islam with violence, arguing that all religions have fundamentalist elements and religious leaders must work together to combat all forms of fundamentalism and violence.

He is scheduled to meet for a fourth time with the head of the Al-Azhar mosque — considered by many to be the highest authority in Sunni Islam — during Monday’s interreligious conference.

Al-Azhar’s Imam Ahmad al-Tayeb had previously cut ties with the Vatican after Pope Francis’s predecessor, Benedict XVI, appeared to link Islam to violence in a 2006 speech.

In his video message, the Pope hailed the UAE as “a land that seeks to be a model of coexistence, human brotherhood, and encounter between different civilizations and cultures.”

The oil-rich Arab state has touted official efforts to promote religious coexistence, appointing a Minister of Tolerance in 2016 and declaring 2019 “the year of tolerance.”

But rights groups and activists have dismissed the moves as “symbolic,” pointing to its intensified crackdown on dissidents in recent years.

“The UAE authorities are trying to brand 2019 as the ‘year of tolerance’ and are now seeking to cast the Pope’s visit as proof of their respect for diversity. Does this mean they are ready to reverse their policy of systematic repression of any form of dissent or criticism?” said Amnesty International’s Middle East Research Director Lynn Maalouf in a statement Friday that called on Pope Francis to raise the issue of the incarceration of some prominent human rights defenders with his hosts.

“Since 2011, the authorities have systematically cracked down on their critics, including activists, judges, lawyers, academics, students and journalists by way of arbitrary detentions, enforced disappearance, torture and other-ill-treatment.”

The UAE government has not responded to CNN’s request for comment on Amnesty’s accusations.

Pope mania in the UAE

But among churchgoers in the UAE, the excitement is palpable, church leaders say.

“I don’t think exciting is the correct word to describe the feeling. I’ve seen the Pope. I visited Rome. But here it’s a completely different atmosphere,” said sister Stephanie Halaseh of Abu Dhabi’s St Joseph Church, the old Catholic church in the UAE.

American Deacon Donald Fox, who will be assisting Pope Francis on the day of the visit, says it will be “the largest type of celebration” that he has ever done.

Pakistani Faisal Kheeran, who has lived in the UAE for nearly a decade, has previously seen the Pope in person but says the pontiff’s visit to his adopted country is a distinct experience.