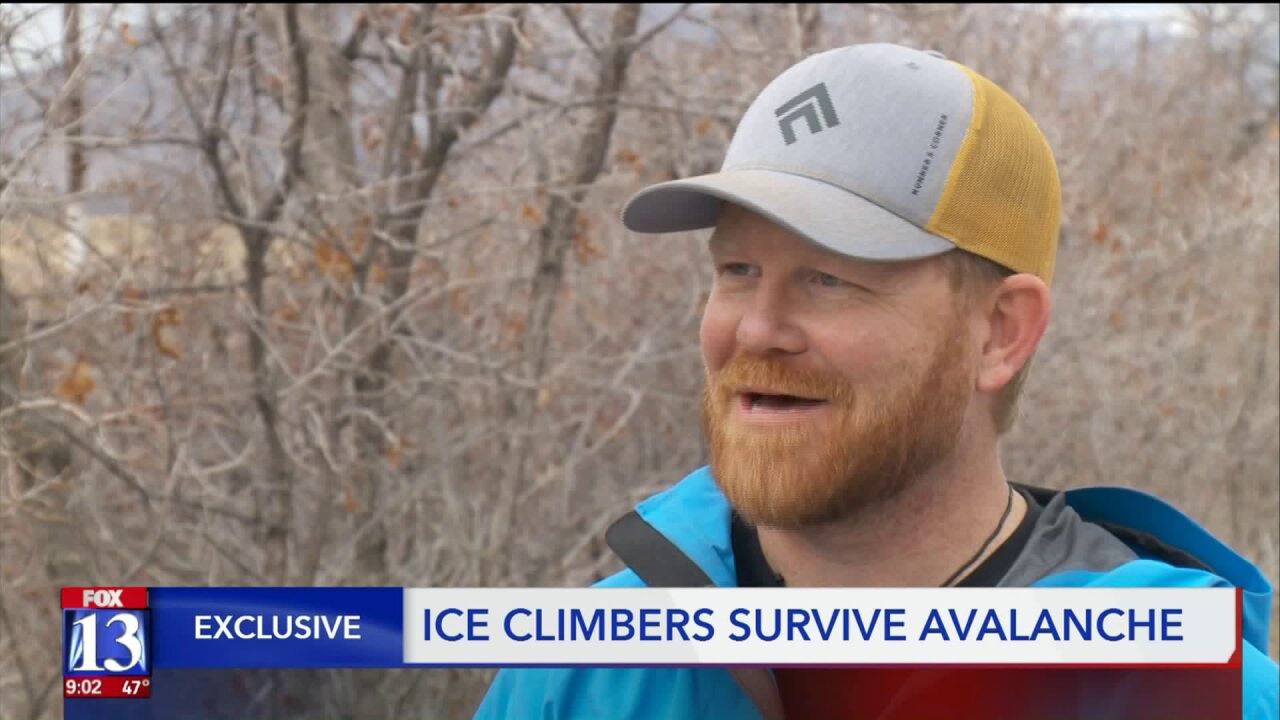 SANTAQUIN, Utah – Two ice climbers were hoisted hundreds of feet up the side of a mountain when a series of avalanches hit Saturday afternoon.

It was a heart-pounding Saturday for Utah ice climbers, Brian Crozier and Shane Hall.

“I saw the avalanche come around the corner up the chute and my heart leapt up into my throat… and then, we just hung on,” said Crozier, recalling the moments before the largest of five avalanches came crashing down around them. “[I] started yelling, ‘avalanche!’ to Shane to warn him."

“I could hear someone yelling,” said Hall, who was at an anchor point in the canyon 60 meters below Crozier. “It was within a couple seconds and it just started coming straight down."

Brian and Shane were climbing a chute up Squashed in Santaquin Canyon, a climb they have safely completed several times.

“We looked at the avalanche report and it didn’t look like it was going to be too much danger today,” said Crozier. “We decided it was good to go."

This time, their climb was different – about half of the way up, during the first pitch of the climb, a small slide came down around them.

“That is probably the time that we should have turned around,” Hall said. “Being a low avalanche day, it just didn’t seem like it was really a big concern.”

Miles away from their car and hundreds of feet up the chute, the two decided to keep climbing. That small slide was just the beginning.

“We got hit by about four more avalanches on the second pitch of the climb,” Crozier said.

“Every time you hear one coming down, you’d tense up,” Hall recalled.

Before they knew it, a massive avalanche was coming right at them, “It just happened so fast,” said Hall.

“It came, hit me in the chest, I was right up against the side of the canyon clipped into the chain right here,” Crozier said gesturing with his hand to show where he was in reference to the mountain. “It picked me up, my whole body, with my feet out behind me… the avalanche was going underneath me.”

“It was loud, you couldn’t see anything, it was intense, it was scary,” Cozier said.

Brian was at the top anchor point on the mountain, Shane was at the next anchor point down (60 meters) and was able to secure himself in a small cove in the canyon that helped to protect him from the avalanche.

“Luckily, I was in the anchor when the biggest one hit us and Shane was in the other anchor so we were able to stay on the mountain,” Crozier said.

Given the distance between them, they couldn’t communicate. They said their only choice was to bring Shane up to Brian so they could do a rope exchange and start their descent.

“As we were doing a rope exchange, a second avalanche hit us and broke his [Shane’s] harness and took one of his ropes, so we had one rope to get down,” Crozier said.

Some nearby hikers saw Brian and Shane and called search and rescue to come to check out what could have been a very bad situation. Fortunately for these climbers, they had a lot of experience on their side and were able to use their one remaining rope to rappel down the mountain to safety.

In total, surviving five different slides – leaving them both a little shaken up, but completely injury free.

“It was pretty terrifying,” said Crozier.

Between the two of them, they have 45 years of combined experience… Still, they say it will be a while before they hit the ice again.