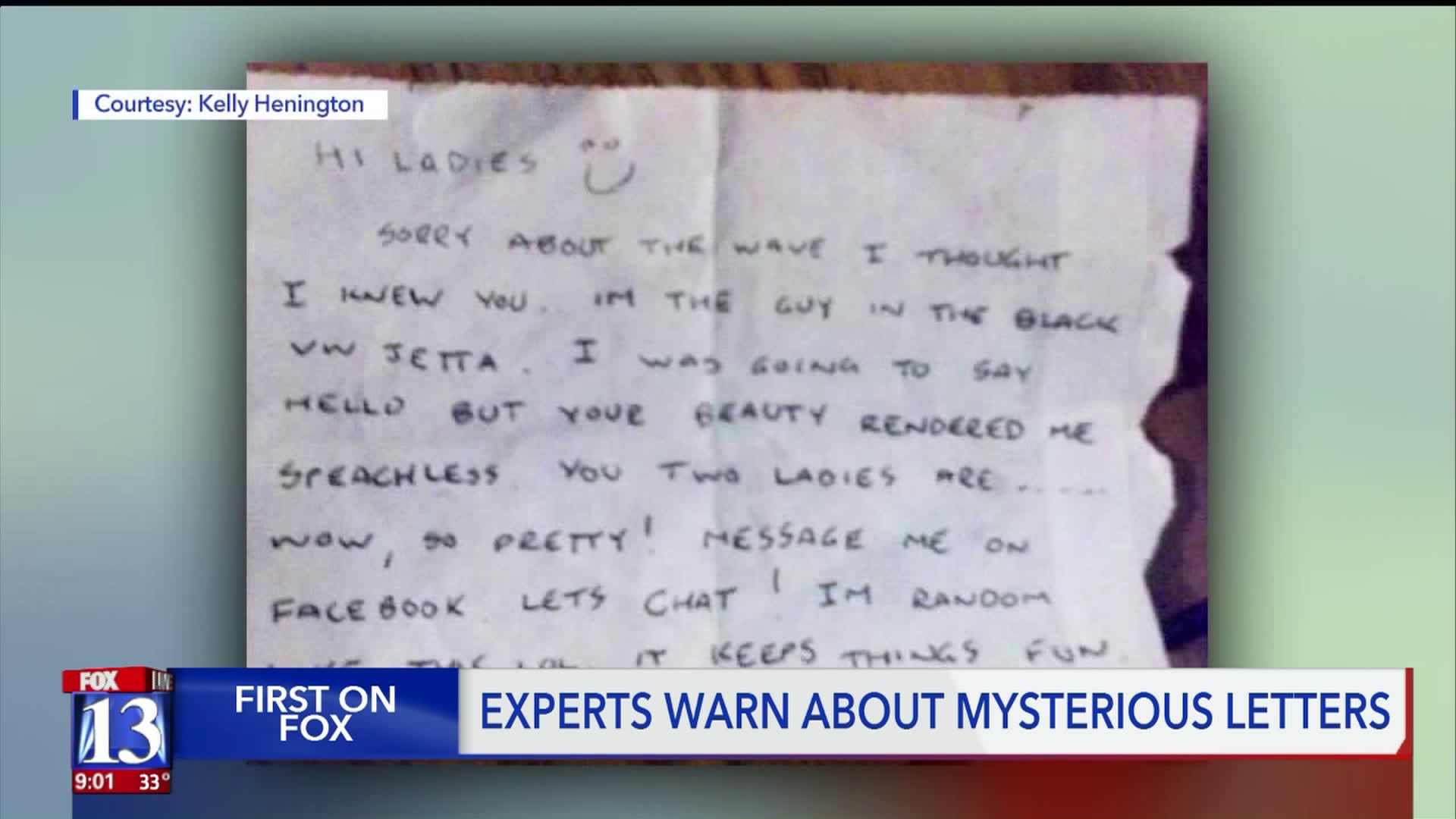 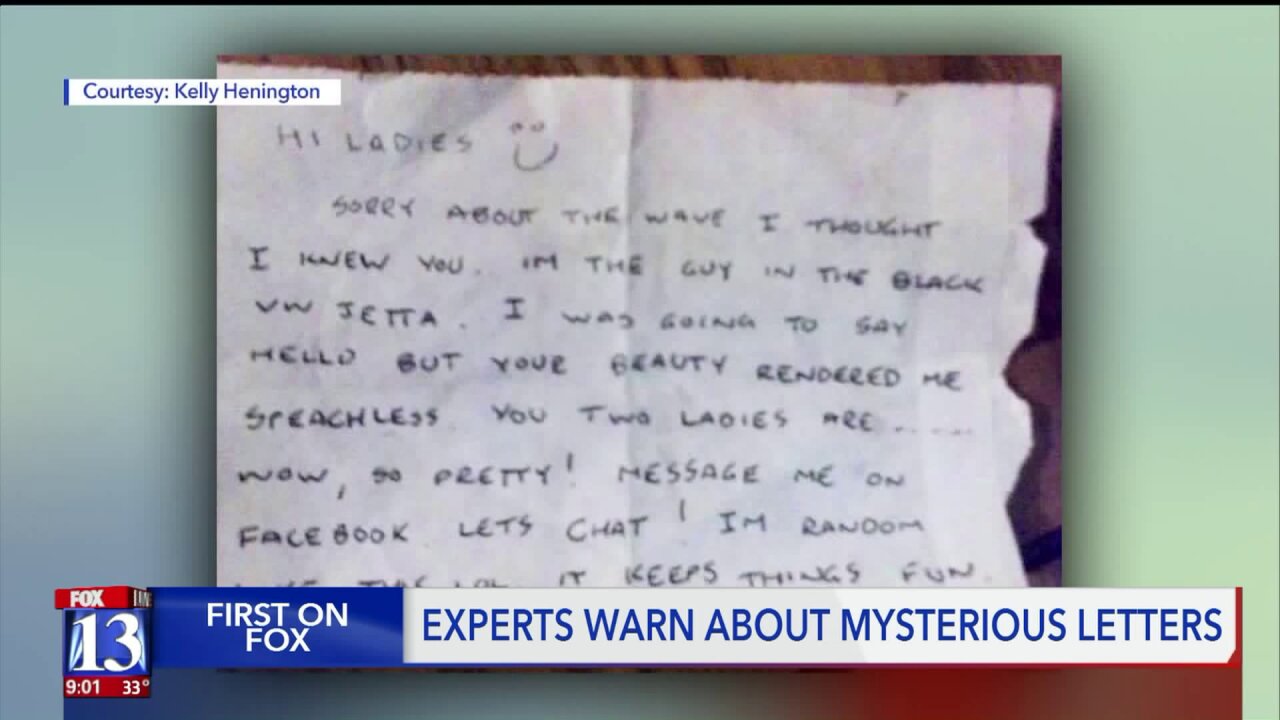 Fox 13 has messaged with and spoken to a dozen women who found the notes on their cars in Davis and Weber Counties.

Now, domestic violence advocates say the messages are alarming, and they question the intentions behind the letters.

On Thursday, several women told Fox 13 they’d received the letters in various locations over the past year. The letter usually starts out with, “I’m so sorry for being so intrusive, but I couldn’t help myself. I wanted to stop and talk, but I couldn’t find a place to park fast enough.”

After the writer showers the recipient with compliments, like “you are absolutely crazy pretty and gorgeous,” and explains, “this is meant to be cute and fun,” he asks the person to contact him.

Some of the women took the gesture as genuine and sweet, and decided to reach out to the letter writer, who gave the name “Chris” and his number.

McKenzie Lee said Friday that she, too, got one of the letters on her car back in 2012 at the Riverdale Walmart. The letter features similar wording, appears to have the same hand writing as the other letters and is also signed by a “Chris.”

Lee was in high school at the time and said she and her friend ended up texting the person.

“He sent a picture of himself, and he tried to tell us he was in his mid-20s. And he looked way older than he said,” Lee explained.

She said she told the man she and her friend were 16 years old.

“He still wanted to go out on a date, and try to get to know me after he found out how old we were,” Lee said.

His text messages also became sexual in nature, she indicated, and Lee ended up blocking the phone number.

Some of the other women who found the letter said Thursday that they also texted “Chris,” but cut off contact after explaining that he became obsessive, manipulative and sexual.

Alyssa Rahter said her mom did research on the man’s identity, after he told her his name.

"That's when I really freaked out,” she said. “He's a convicted child predator basically, and he had been stalking [a different] girl for ten years."

Rahter explained her mom found the man was on probation for a sex crime against a minor, and had a previous history of electronic communications harassment as well as stalking.

Layton Police had said Thursday the letters themselves don’t break any laws.

However, given the potential history of this person and what’s contained in the notes, the Utah Domestic Violence Coalition explained that they found the letters and man’s behavior extremely concerning.

“These are stalking, grooming behaviors,” said executive director Jenn Oxborrow. “I think this is a person that's clearly showing a pattern of power and control.”

She said it was clear in the letter that the man is trying to normalize the behavior through phrases like, “please don’t be offended.” She said it’s not normal to write a letter to someone you don’t know, leave it on their personal property, and ask for their confidence and engagement.

“These situations, they can ramp up very quickly. And, especially for someone who has a pattern,” Oxborrow said. “He's practiced this. People who have a pattern of abuse and control have been doing it a long time, and sometimes they're very good at it.”

Oxborrow said that anyone who is being repeatedly reached out to and bothered through electronic communication like email, text and social media can call police and report the behavior, thanks to a new law that took effect last year.

She said police can intervene in the unwanted contact, and that the electronic harassment law can be enhanced up to a felony, especially if it’s against a minor.

In addition to contacting police, she urged reaching out to trained domestic violence advocates. She said the Utah Domestic Violence Coalition runs a hotline at 1-800-897-LINK.

Advocates can help with safety planning, she said.

“As soon as you realize that you are in a situation that is not as safe as it could be, you can always make change happen,” Oxborrow said.

Fox 13 is not identifying the person behind these letters, because the letters themselves are not criminal.

However, Fox 13 reached out to the man who wrote them. He acknowledged the letters, as well as his past criminal charges.

“It was meant to be cute and fun,” the man said of the letters, in a text message. “It was simply a way to meet women. I want to make friends and find companionship.”