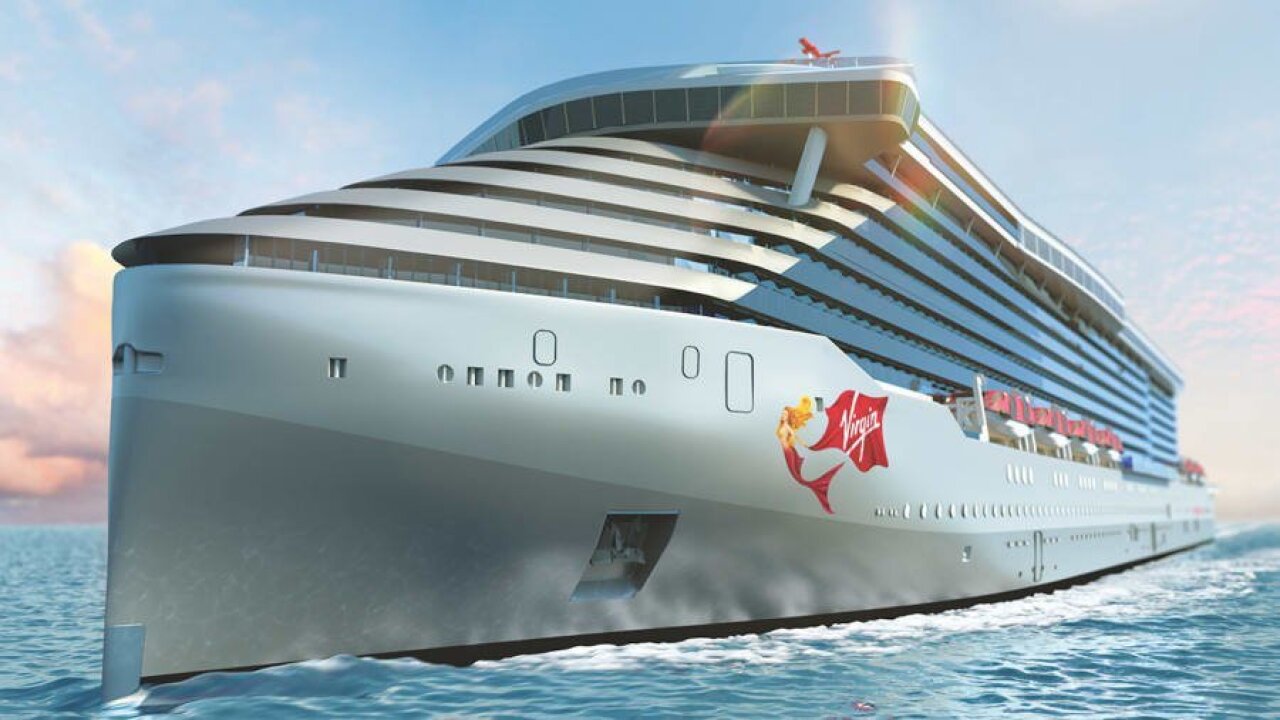 A rendering of Virgin Voyages’ first ship, the Scarlet Lady, due to set sail in 2020. Click on for a sneak peek of the ship’s luxury “RockStar” suites.

Unless you’re talking about Virgin Voyages’ first ship, the adults-only Scarlet Lady, which will depart Miami for the Caribbean in 2020.

The Richard Branson-backed cruise line has just released renderings of the ship’s 78 luxury “RockStar Suites,” which will be located on the ship’s 15th deck.

These will include 15 Mega RockStar Suites, which are further divided into Massive, Fab, Posh and Gorgeous Suites.

The rock star theme is quite literal, too. The Massive Suite will feature a music room stocked with guitars, an amp and a special private lookout point at the front of the ship.

It’s got a private terrace with a standing hot tub, a large “runway” table for when you’re entertaining guests and an open-air “Peek-a-View” shower that offers sea views.

These suites come with rock star treatment as well.

RockStar sailors — Virgin doesn’t refer to its guests as “passengers” — get private airport transfers, access to an exclusive terminal pathway and personal “rock and roll style rider sheets to satisfy even the most diva-like of requests.”

The designers behind the suites say they called on the Virgin brand’s rock and roll heritage, with rooms featuring nods to icons such as Grace Jones.

Sailors can expect a retro-futurism vibe with deep blues and iridescent dichroic elements in the bathroom to echo the deep blue sea.

“We wanted to inject a bit of exclusive, distinctive, luxurious feeling nostalgia in a contemporary way that speaks to today’s traveler more,” says Dee Cooper, senior vice president of design for Virgin Voyages, in a statement.

All suite guests will have access to Richard’s Rooftop, “an exclusive chic outdoor lounge.”

Changing the way we cruise
A joint venture between Virgin Group and Bain Capital, Virgin Voyages is targeted at travelers who might not normally consider cruising.

The progression shouldn’t come as a surprise, given Virgin already has stakes in aviation, trains, hotels and even space travel.

The Scarlet Lady is the first of three planned Virgin Voyages ships, with two more due to come in 2021 and 2022.

According to the ship’s builder, Fincantieri, it will weigh about 110,000 gross tons and stretch 278 meters long and 38 meters wide.

With a silver-gray hull and smoked glass, the ship’s design was inspired by the sleek luxury of a yacht, while red highlights are of course a nod to Virgin’s branding.

The ship will feature over 20 dining and drinking options — but no buffets, main dining rooms or assigned dining times like you’d find on traditional cruise ships. Formal wear nights? They’ve ditched that idea too.

Restaurants will include Wake, which serves “a theatrical take on steak and seafood” and is “the most glamorous restaurant on the ship.” As the name implies, it’s located at the back of the ship and offers dramatic views of its wake.”

Test Kitchen will be a laboratory-like eatery — “part cooking school and part restaurant.”

But the one that we’re most intrigued by is Geonbae, a Korean BBQ restaurant.

“Hosted by the loudest servers at sea, each meal will begin with a complimentary round of soju for the table and throughout the evening sailors are encouraged to take part in lively Korean drinking games,” says Virgin Voyages’ description of the restaurant.

All of the ship’s restaurant food will be included in the fare, with no upcharges — another departure from what you’ll find on big brand ships currently plying the seas.

Other onboard amenities include plenty of creatively designed outdoor recreational spaces, including the Athletic Club, an outdoor lounge featuring what the cruise line claims will be the largest daybed at sea.

There will also be an onboard tattoo and body piercing parlor, dubbed Squid Ink, part of a partnership with New York’s World Famous Ink.

Single-use plastic will be banned from the ship. This means no plastic straws, bottles, stirrers, condiment packs and other unnecessary food packaging. Still and sparkling water will be complimentary.

Ready to set sail? Virgin Voyages will open for bookings on February 14th.