Despite pressure from residents and the city council, Herriman mayor says he won’t resign 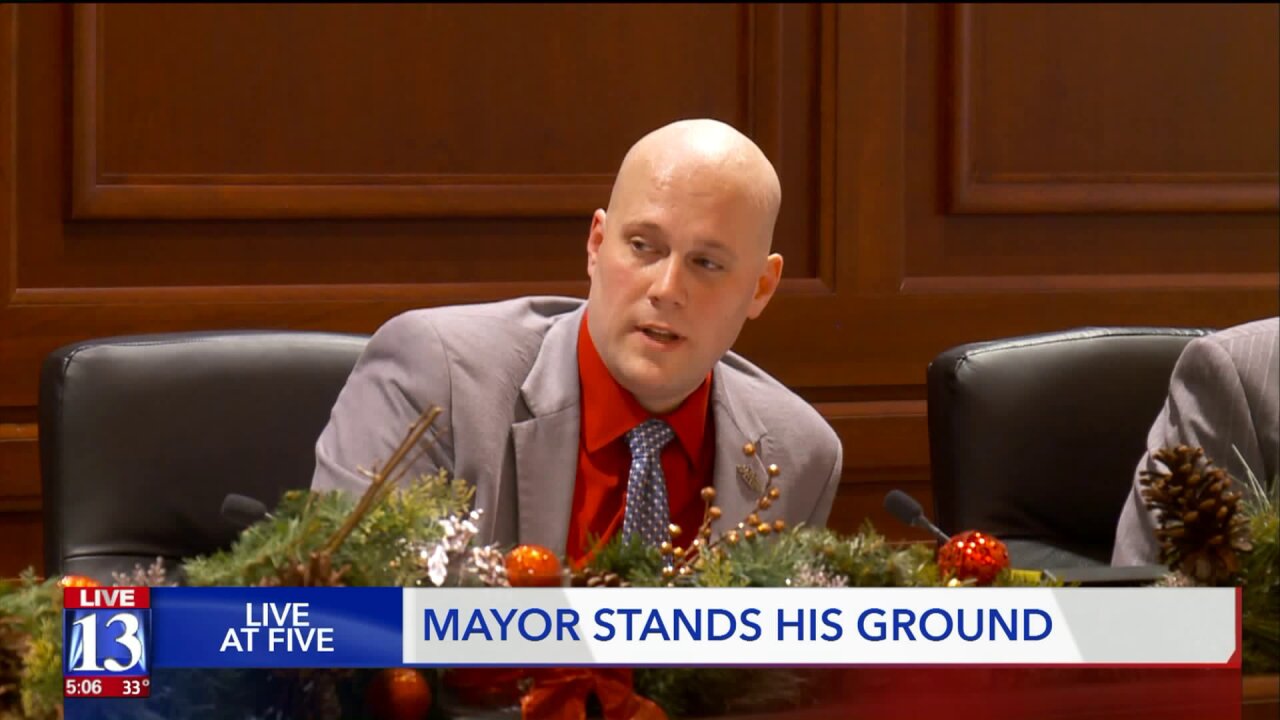 HERRIMAN, Utah -- The Mayor of Herriman said he will not resign even as some members of the city council and residents call for him to step down over allegations of unauthorized spending.

"I will not be resigning," Mayor David Watts said during a city council meeting held Wednesday night. "I just want to make that clear that I do not feel that I have done anything intentionally to be misleading or to damage the city."

The city council met to discuss charges made on a credit card issued to the mayor. The Salt Lake County District Attorney investigated the situation and determined there wasn't enough evidence to bring criminal charges in the case.

Despite the lack of a criminal charge, some citizens are calling for greater accountability.

"Just resign, do the right thing," one resident said during the meeting.

“I don't think you should be here. I think you need to step down,” Hill said.

“We gave you a chance and you blew it," Robbins said. "I ask that you do what's best for the city and resign."

"You're just hurting yourself Mayor, that's it," Herriman city councilman Jared Henderson said during the meeting. "You are subject to the judgement of your peers and the public."

The city council has asked the mayor to pay back just under $950 they said was spent without authorization. They claim he used a company issued credit card during two trips to Washington D.C.

During one trip, councilmembers say he used his title to purchase an earlier flight home after the group’s flight had been delayed. Herriman Council member Sherrie Ohrn said he told her about the interaction with the airline.

“I told the lady at the counter, the ticket lady, 'I am the mayor,'" Ohrn said. "I have a very important meeting with the fire department. You get me a flight."

That flight included a layover in Denver where he spent more than $300 on a hotel room. Council member Nicole Martin, was among the other city employees, whose flight was cancelled. They ended up arriving in Salt Lake City only 30 minutes after Watts.

“Anything that was an expense that arrived from the mayor's decision to leave Washington D.C. early to me is now his personal responsibility,” Martin said.

Even though he was made aware of the violations in June, he’s only now paying back the nearly $1,000.

“It’s not just simply misuse of funds. It’s attitude. There has not been a 'sorry,'" Ohrn said. "This packet, which the mayor presented to the council tonight is the first response the council has had from the mayor on this issue."

They said if the mayor does not pay back the funds they will be forced to pursue legal action.

The city discovered the financial issue in July of this year and said Mayor Watts did not follow the procedures in place for expenditures on city cards.

The city council has also decided that the mayor and city council members will not be issued credit cards going forward.

Since the mayor can’t be forcibly removed from office, the city council says they plan to remove him from all committees and decrease his pay.