Walmart joins the push for Utah to ditch 3.2 beer as six-packs start disappearing from shelves 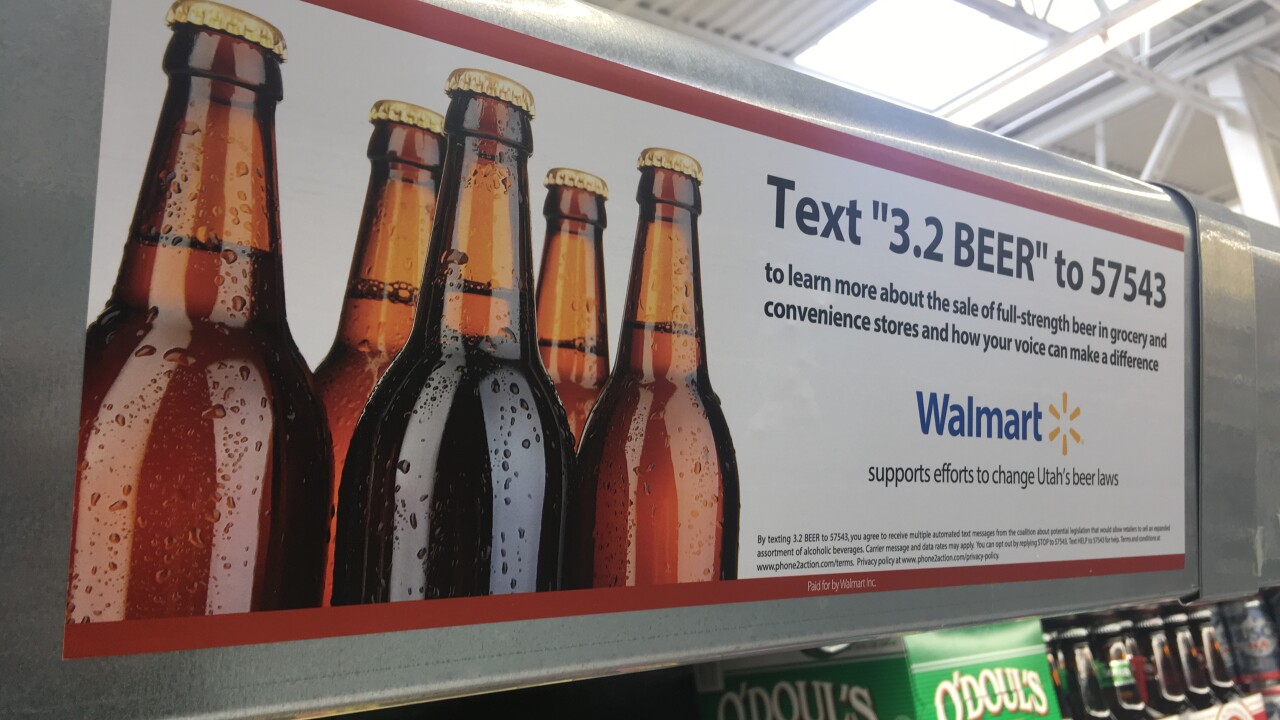 SALT LAKE CITY -- Signs are being posted on the beer aisles in Walmart stores across Utah urging consumers to get involved in the push to get rid of 3.2 beer.

Customers are urged to text a number to get involved in Walmart's "Customer Action Network" as the mega-retailer pressures the Utah State Legislature to change the legal definition of beer to allow heavier brews to be sold in grocery and convenience stores.

"Walmart is currently asking our customers who already buy 3.2 beer if they would like the option to purchase full-strength beer in grocery and convenience stores, without having to travel to a state-operated liquor store. With recent changes to Oklahoma, Colorado, and Kansas laws, Utah remains one of the only states where consumers don’t have this option," Walmart spokeswoman Tiffany Wilson said in a statement to FOX 13.

"Walmart is a strong believer in consumer choice and offering our customers low prices on the products they want. This means we are constantly looking for ways to meet our customers’ needs and expectations."

Walmart's very public move into the battle over 3.2 beer has surprised some on Utah's Capitol Hill, where efforts to allow heavier beers into grocery and convenience stores have so far gone nowhere. But it is the most powerful sign yet that retailers are not losing any shelf space.

"Walmart is a huge player in the retail market space," said Kate Bradshaw, the director of the recently formed Responsible Beer Choice Coalition, which represents major beer labels who are seeking to raise alcohol by weight from 3.2% (where it is now) to 4.8% to match what the majority of major labels brew at in the rest of the country.

Oklahoma, Colorado and Kansas recently voted to drop 3.2 beer, leaving Utah as one of the last holdouts. Because Utah is not a heavy drinking state anyway, we now represent less than one half of a percent of all the beer drinkers in America.

Already, product is slowly disappearing from store shelves. Bradshaw told FOX 13 that packages of favorite brews are being discontinued. They include:

That means for consumers, they must buy in bigger caseloads and what's left also has a shorter shelf-life because major brewers like Anheuser-Busch and MillerCoors aren't making as much just for Utah.

Bradshaw argued that raising the alcohol content slightly kept those brands on store shelves with minimal disruption to consumers.

"There’s a whole range of options the state could have to still maintain the bulk of alcohol sales taking place in a low alcohol environment, still having the checks we would expect to make sure there’s public safety and making sure we don’t have youth access, but still maintaining an environment where consumers have choice," she said.

But the Utah Brewer's Guild, which represents local craft breweries, is opposed to it.

"We need to talk about what that limit is and whether there should be a limit," said Nicole Dicou, the group's executive director.

The Utah Brewer's Guild argues that too low of a limit on alcohol still keeps their product in state-run liquor stores.

"It would put the craft breweries at a disadvantage because the shelf space at the grocery store would be flooded with mega beers," Dicou told FOX 13.

But already raising the limit on beer is problematic in a legislature that has consistently voted for temperance liquor laws. Many lawmakers have been reluctant to do so. The Church of Jesus Christ of Latter-day Saints, a major political force on Capitol Hill, has repeatedly said it believes Utah liquor laws are fine as is.

Sen. Jerry Stevenson, R-Layton, who is tasked by the Republican majority in the Utah State Senate with running liquor laws, has been meeting with all sides. He said he planned to bring up the issue with the Senate Majority Caucus next week to see if there's an appetite for a bill.

"I don’t think I’m quite as concerned as a lot of folks on it. I think it’s maybe quite logical to move to a higher point," Sen. Stevenson told FOX 13.

If nothing is done in the 2019 legislative session, retailers have warned that a ballot initiative (just like voters saw with medical marijuana) is a possibility in 2020.

Sen. Stevenson did not view that as an empty threat.

"After this last round, I don’t believe there are such things as empty threats," he said. "I think we need to view everything seriously."