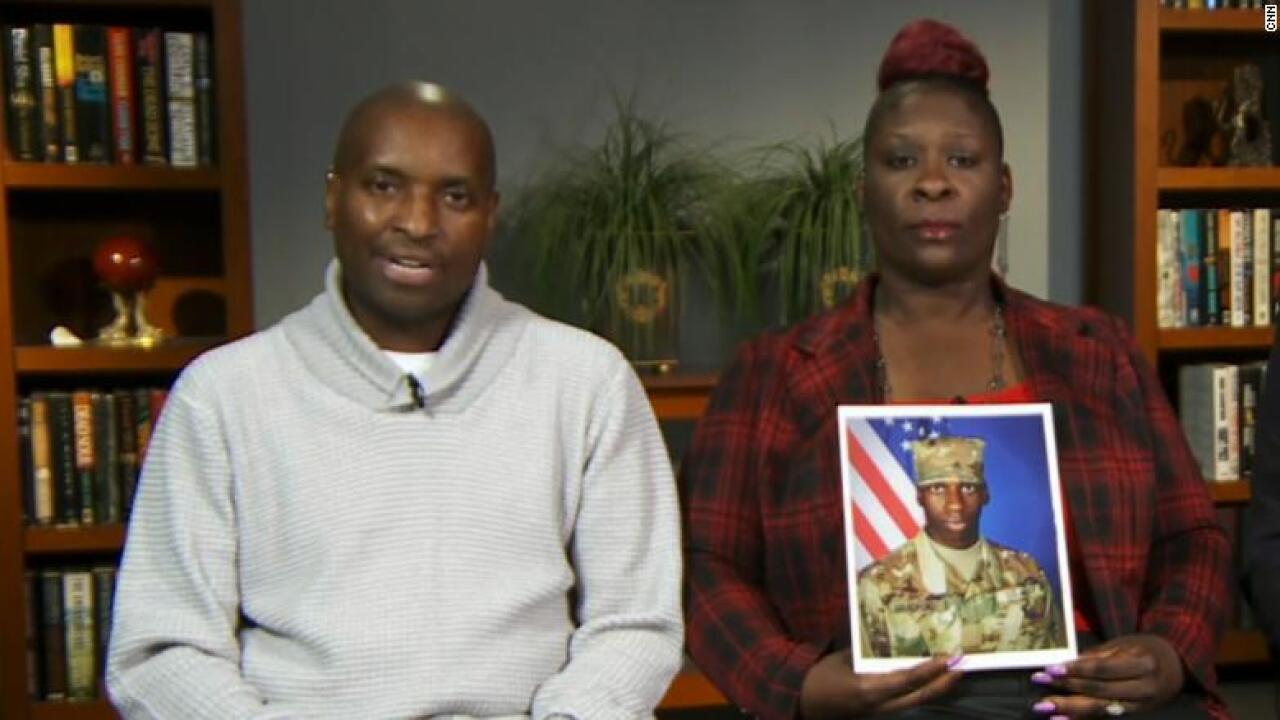 As the family of Emantic Bradford Jr. continues to demand answers from Hoover police, the department Monday issued another correction of an earlier report — this time, that Bradford had “brandished” a gun when a policeman killed him at an Alabama mall.

“Earlier, we stated that Mr. Bradford ‘brandished’ a gun,” the statement on Facebook said, without providing details on how Bradford was holding the gun. “To clarify, the word ‘brandish’ was used because Mr. Bradford had a gun in his hand as police officers responded to the active shooter situation between mall patrons.”

Brandish typically means to wave a weapon in a threatening manner. The statement provided no additional detail as to how Bradford was holding his weapon.

Hoover police initially said Bradford shot a 12- and an 18-year-old in the Birmingham suburb’s Riverchase Galleria and that an officer killed him as he fled. Police later changed the story, saying witnesses and forensic tests indicated that while Bradford may have been involved in an altercation at the mall, he likely did not fire the rounds that injured the victims.

Monday morning’s update did nothing to clarify that clarification and did not provide much else in the way of new information, despite Bradford’s family and civil rights attorney Ben Crump leveling a series of accusations against the department.

Among them: The officer who killed the 21-year-old never issued a warning before opening fire on Bradford, who had a concealed weapon permit, Crump said.

The shooter remains at large, the Hoover police statement said, and all pertinent departments are cooperating with the Alabama Law Enforcement Agency, which is leading the investigation. Hoover police have referred CNN’s questions to ALEA.

The shooter has not been identified, nor has the officer who was working as mall security when he killed Bradford. The officer is on administrative leave, police previously said.

“We all want answers and we believe that with patience and focus, the truth will be firmly established,” Monday’s police statement said.

It’s still unclear whether police believe Bradford was involved in any altercation before he was shot.

Hoover Mayor Frank Brocato asked for patience with the investigation, which he said is now out of the city’s hands.

“We want to stress that we’re deeply and sincerely sympathetic to the family and friends of Mr. Emantic Fitzgerald Bradford Jr.,” the mayor said.

Brocato said authorities are in the process of meeting with the Bradford family. Bradford’s parents have previously complained that no one from Hoover has reached out to them, even though his dad has a background in law enforcement.

ALEA has “certain information” about the alleged shooter and is asking the public to help them make arrest, the mayor said. The state agency has footage of that night and will determine when it will be released, he said.

“We have to trust the justice process and we plead your patience in that,” the mayor said.

On Monday night, protesters marched into the mall, to where Bradford, who friends and family knew as EJ, was shot.

Protesters, including a family member, locked arms at one point and chanted “EJ.” They stood at the spot where Bradford was shot and accused the police of lying. Again, they chanted, “EJ,” and observed a movement of silence.

One protestor held a sign that said, “Emantic’s Life Matters.”

Crump said Bradford was trying to help victims to safety when he was shot. After the shooting, police provided the young man with no medical assistance, the attorney said.

Photos and videos from the scene show a man on the ground outside a shoe store on an upper floor, bleeding heavily onto the mall’s cream tile floor. Several police are in the area, including officers who appear to handcuff a man nearby.

“He saw a black man with a gun, and he made his determination that he must be a criminal,” Crump said Sunday, flanked by about two dozen of Bradford’s relatives.

“They concluded their investigation while EJ was (lying) on the mall floor, bleeding out, dying. … There’s a murderer on the loose largely because police rushed to judgment.”

‘There was blood on her shirt’

Alabama Army National Guardsman Rashad Billingsley, 18, was at the mall with his cousin and two friends when the shooting erupted.

“I got down for cover. I heard two shots, then a 3- to 5-second pause and another two or three more gunshots,” said Billingsley, who lives in Ashland.

Billingsley ran to the hallway where he saw the 12-year-old girl victim, “walking in the hallway, complaining her back hurt. There was blood on her shirt,” he said.

The victim didn’t know she had been shot until she overheard her grandmother telling her mother over the phone, he said. She started to panic.

Billingsley asked a police officer to hand him a T-shirt from a clothing rack, he said. Relying on his medical training, he used the T-shirt to stop the bleeding and apply pressure to the wound until paramedics arrived.

Once the victim was carted out, Billingsley and the victim’s sister walked past a body on the way out of the mall, he said. Billingsley put his arm up to keep her from seeing it.

‘He was not a killer’

Bradford’s parents knew their son wasn’t the shooter, Crump said. “They knew it wasn’t true even before the police retracted their statement,” the attorney said.

Bradford’s father, who spent 25 years as a correctional officer and is battling cancer, has blasted the Hoover Police Department, saying no one has reached out to him with details of his son’s death. He is demanding investigators immediately release all video of the incident.

In a CNN interview Monday, his mother, April Pipkins, said that because her son was shot in the face, she’s not sure if she will ever be able to see him again. It’s not clear if the family can hold an open-casket funeral, she said.

“My Thanksgiving will never be the same. I will never be able to see my son’s face again or to look into his eyes or to hear him say, ‘Mom, I love you,'” she said. “Not even knowing if I’ll be able to have an open casket, to see him again. I am just at a loss of words right now.”

Bradford had no criminal record, Crump said. He was a caretaker to his father, worked full time and helped his mother financially.

“My son was a loving — very loving — young man. He would give any of you the shirt off his back,” Pipkins told reporters Sunday. “He loved people, period. He was not a killer.”