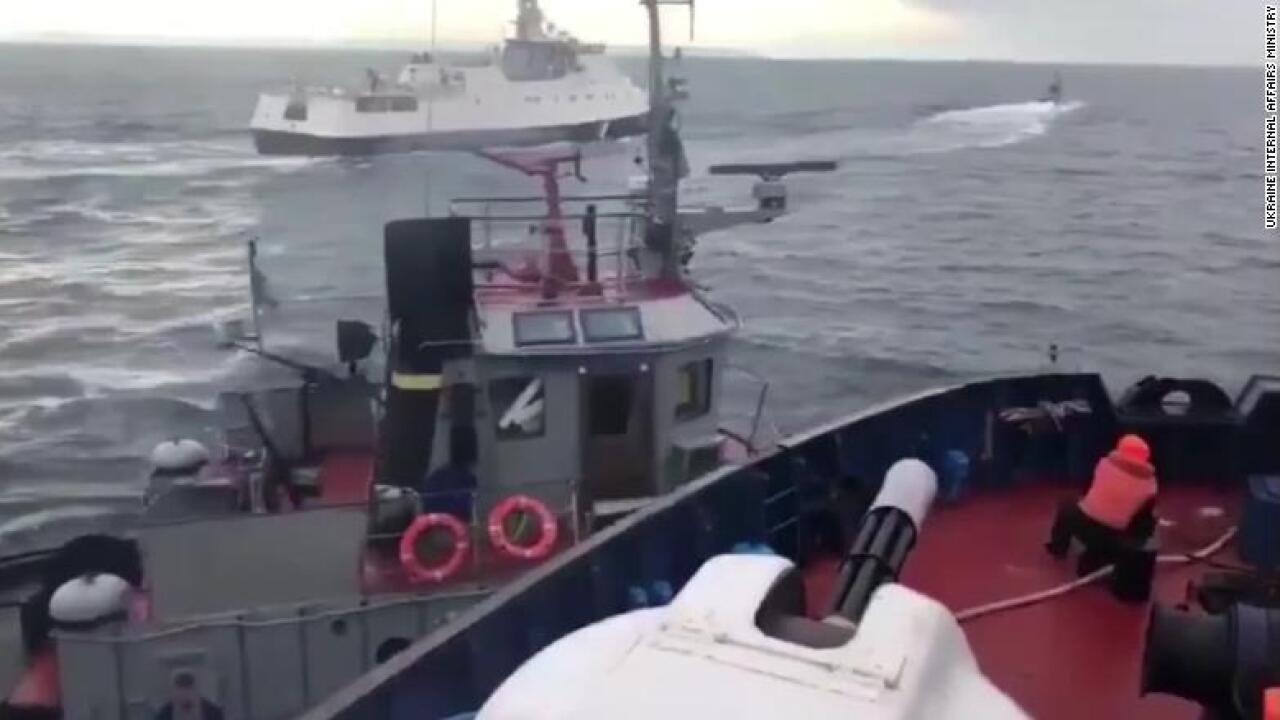 Ukrainian lawmakers were set to vote Monday on whether to implement martial law after Russia seized three Ukrainian navy ships in a key waterway that holds strategic importance for both countries.

The incident on Sunday marked a major escalation in tensions between the two former Soviet Republics. NATO has called for calm, and an emergency United Nations Security Council meeting will be convened Monday to discuss the issue.

Ukraine said the small gunboats Berdyansk and Nikopol and the tugboat Yany Kapu were attacked by Russian forces after entering the Kerch Strait, en route to the city of Mariupol, on Sunday.

Video of the incident released by Ukrainian officials appeared to show a Russian ship ramming the Ukrainian tugboat.

Six of its sailors were injured in the incident, Ukraine’s navy said, adding that the tugboat and the Berdyansk were disabled and towed away by the Russian navy. The undamaged Nikopol is also under Russian control, Ukraine said.

The Kerch Strait — a shallow, narrow stretch of water just 2-3miles wide at one point — connects the Azov Sea with the Black Sea and runs between the Crimean Peninsula and Russia. It is an important economic lifeline for Ukraine, as it allows its ships to access the Black Sea.

It’s also the closest point of access for Russia to Crimea, a peninsula Moscow annexed from Ukraine in 2014. A Russian-built bridge over the Kerch Strait was opened in May this year.

Similarly EU foreign affairs spokeswoman Maja Kocijancic condemned Russian aggression towards Ukraine at a press briefing on Monday. She called on Russia to “immediately release the vessels and the crew.”

Russia and Ukraine have been locked in long-simmering conflict since the annexation of the Black Sea peninsula of Crimea by Russia in 2014, and a war with Russian-backed separatists in the country’s east has claimed more than 10,000 lives.

Ukraine and Russia offered conflicting accounts of the incident, each accusing the other side of violating the laws of the sea. A 2003 agreement confirms the Azov Sea and the Kerch Strait as domestic waters of Russia and Ukraine.

TASS reported the three Ukrainian vessels were detained by Russian forces and that “weapons were used to force them to stop.”

“They did not respond to legitimate demands by the ships and boats of Russia’s FSB Border Guard Service escorting them to stop immediately and performed dangerous maneuvers,” the FSB said, according to TASS.

The Ukrainian navy, on the other hand, said Russian border patrol vessels “carried out openly aggressive action” against the Ukrainian ships.

President Poroshenko’s office described the Russian action against the Ukrainian navy ships as “an act of aggression aimed at deliberately escalating the situation in the waters of the Sea of Azov and the Kerch Strait,” and called for international condemnation of Moscow and the imposition of new sanctions.

The video appears to be shot from on board a Russian vessel. A commander can be heard speaking Russian, swearing and ordering his crew to “slam him from the right,” “squeeze him” and finally warning those on board to “hold on” before the moment of impact.

It’s unclear how Avakov obtained the video. Similar clips were released by Russian state media but those did not show the actual collision.

In a post on Facebook, Russian Foreign Ministry spokeswoman Maria Zakharova said the incident had been devised to “divert attention from the internal problems that are ravaging Ukraine and blame the neighbor responsible for all of Ukraine’s troubles.”

In the wake of the incident, Russia temporarily closed off the strait. However, it has since been reopened for civilian ships, according to TASS.

Video from the scene showed a tanker blocking the waters under the bridge and fighter jets flying near the bridge.

On Sunday, Poroshenko convened a military cabinet emergency meeting and later tweeted he would appeal to Parliament to declare martial law. “There are no red lines” for Russia, he said. “We consider such actions categorically unacceptable. And this aggression has already led to consequences.”

Ukraine and the United States have been accusing Russia of interfering with international shipping in and out of the Kerch Strait for some months now.

Russian state media has reported the confrontation is a provocation orchestrated by Ukraine and others in America to disrupt the forthcoming meeting between Russian President Vladimir Putin and President Donald Trump at the G20 summit in Buenos Aires this week.