From sidewalk riding to blocked pedestrian paths, SLC gets an earful about scooters 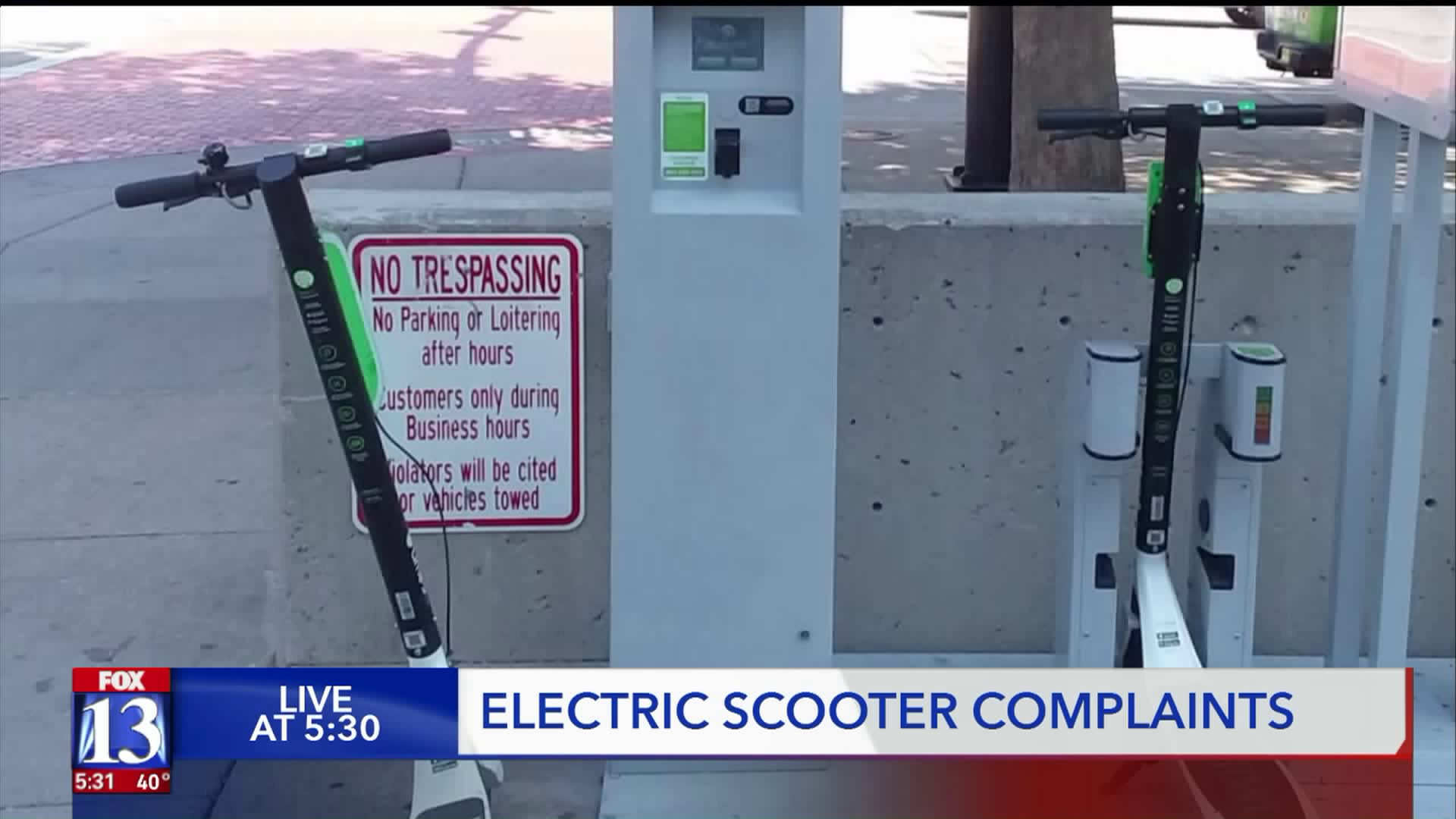 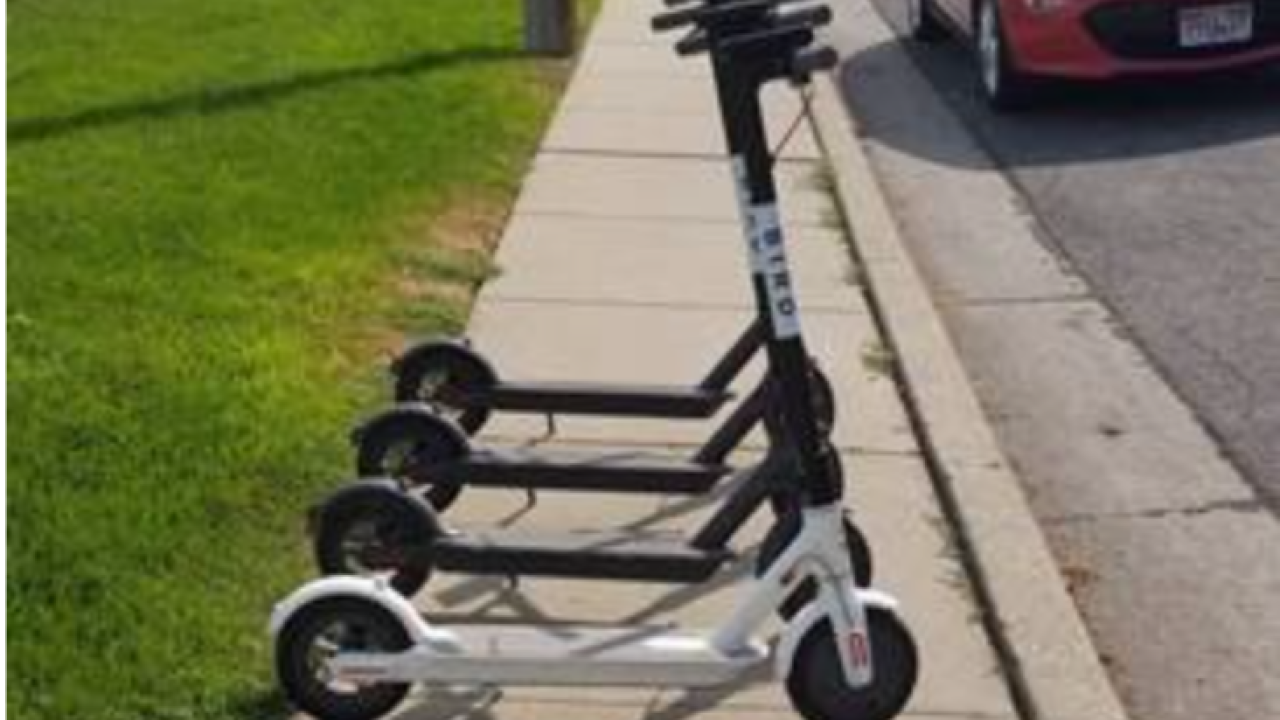 Bird scooters block a sidewalk in a photograph sent to Salt Lake City complaining about it. (Image provided to FOX 13 under a public records request)

Under a public records request, Salt Lake City provided to FOX 13 more than 1,400 pages of complaints (and a few compliments) about the Bird and Lime scooters. They encompass hundreds of complaints and dozens of photographs outlining the problems sent to a special email set up to address scooter issues, "dockless@slcgov.com."

Deborah Feder wrote to complain about almost being hit.

"It is getting to the point where I can’t safely walk in my own neighborhood. Several times I have had to step into the street with traffic when several scooters are coming toward me, especially when they are going downhill. My dog is terrified and I am reluctant to bring my elderly dad for a walk because he simply can’t jump out of the way quickly," she wrote. "At night, the problem is even worse. I’m on edge whenever I take my dog out after dark. This is completely unacceptable. I don’t know what sort of bargain the city has made with these companies that you seem unable to police them."

"Witnessed two scooters traveling between 15-20 mile per hour on the sidewalk scare a woman who tripped and fell. When is the city going to do something about this? Sidewalks are for pedestrians. This issue is getting out of hand," another wrote.

Salt Lake City Transportation Director Jon Larsen said sidewalk riders are the number one complaint they get about the scooters.

"I think it’s really unnerving and people have a right to be upset," he told FOX 13 on Monday.

A pair of Bird scooters are parked in a GREENbike dock in a pic sent to Salt Lake City complaining about it. (Image provided to FOX 13 under a public records request)

Other complaints show that people are upset about riders abandoning Bird and Lime scooters where they block pedestrian or wheelchair access or bus stops. GREENbike, which operates the rental bicycles downtown, regularly complains about scooters being left in and around their docks, according to the records. Photographic evidence was included.

Larsen said the volume of complaints show that people have strong feelings about the Bird and Lime scooters.

He said the companies have shared their dashboard data from the phone apps required to use them. It shows that nevertheless, they remain popular with "tens of thousands" of rides every week.

"As a company committed to improving mobility in cities, we share the concern over protecting the public right of way in Salt Lake City from all vehicles including cars, bikes, and Birds," a spokesperson for Bird said in an email to FOX 13 in response to a request for comment. "We strive to improve and enhance the well-being of our riders and communities through concrete action, including through consistent safety education such as an in-app tutorial on how to ride a Bird and how to park it, and posting clear safety instructions on each Bird. We also have a team of Birdwatchers on the ground in Salt Lake City to reposition Birds and encourage riders to park safely."

Lime did not immediately respond to an email seeking comment.

A few emails sent to the city praise the scooters for being a better alternative to vehicles.

"I love them! Gives an easy and fun way to be more green while providing a different alternative for transportation for those who don’t have cars. Makes accessing bus stops, etc easier. It’s fabulous," wrote one person.

"I love them. They are easy to access and make me less likely to use my car around town. They are a great idea and I love that Salt Lake embraces new ideas," wrote another.

The city is in the midst of crafting an ordinance to regulate the scooters since Bird abruptly appeared in downtown Salt Lake City. The company had to pull the scooters until a temporary agreement could be put in place. Lime appeared shortly afterward.

Lime bikes parked on a parking strip in a pic sent to Salt Lake City complaining about it. (Image provided to FOX 13 under a public records request)

Larsen said Salt Lake City police have indicated they are busy with higher-priority calls and do not plan to do any kind of a crackdown on scooter-violators. Bird and Lime have updated the notices on their app to warn riders not to ride on the sidewalk.

For now, the city has tried to do more educational outreach -- urging riders to wear helmets or ride in the bike lanes. City workers have stenciled in warnings on sidewalks telling bicyclists, skateboarders and scooters to stay in their lane.

"We want to be a friendly city for everyone and I think we’re just going to keep efforts on the education for now," Larsen said.

A proposed ordinance regulating the scooters is expected in the spring or early summer. Larsen said it could include fees for companies that want to operate in Salt Lake City, designated parking places for the scooters and even allowing sidewalk use in some places, if there's no bike lane or the road is simply too dangerous.

"Some feedback we have got is maybe it is OK to ride on the sidewalk as long as you’re going walking speed?" he said. "So those are conversations we need to have and we want to make sure we have those in an open and transparent way."

Other communities are watching what Salt Lake City does with interest. St. George and Midvale both have reached out to ask for copies of agreements and proposed ordinances.

Marc Mortensen, a spokesman for the City of St. George, told FOX 13 they are taking bids for electric scooter companies to operate and evaluating their own set of regulations. Their city council could decide soon whether to allow them in.