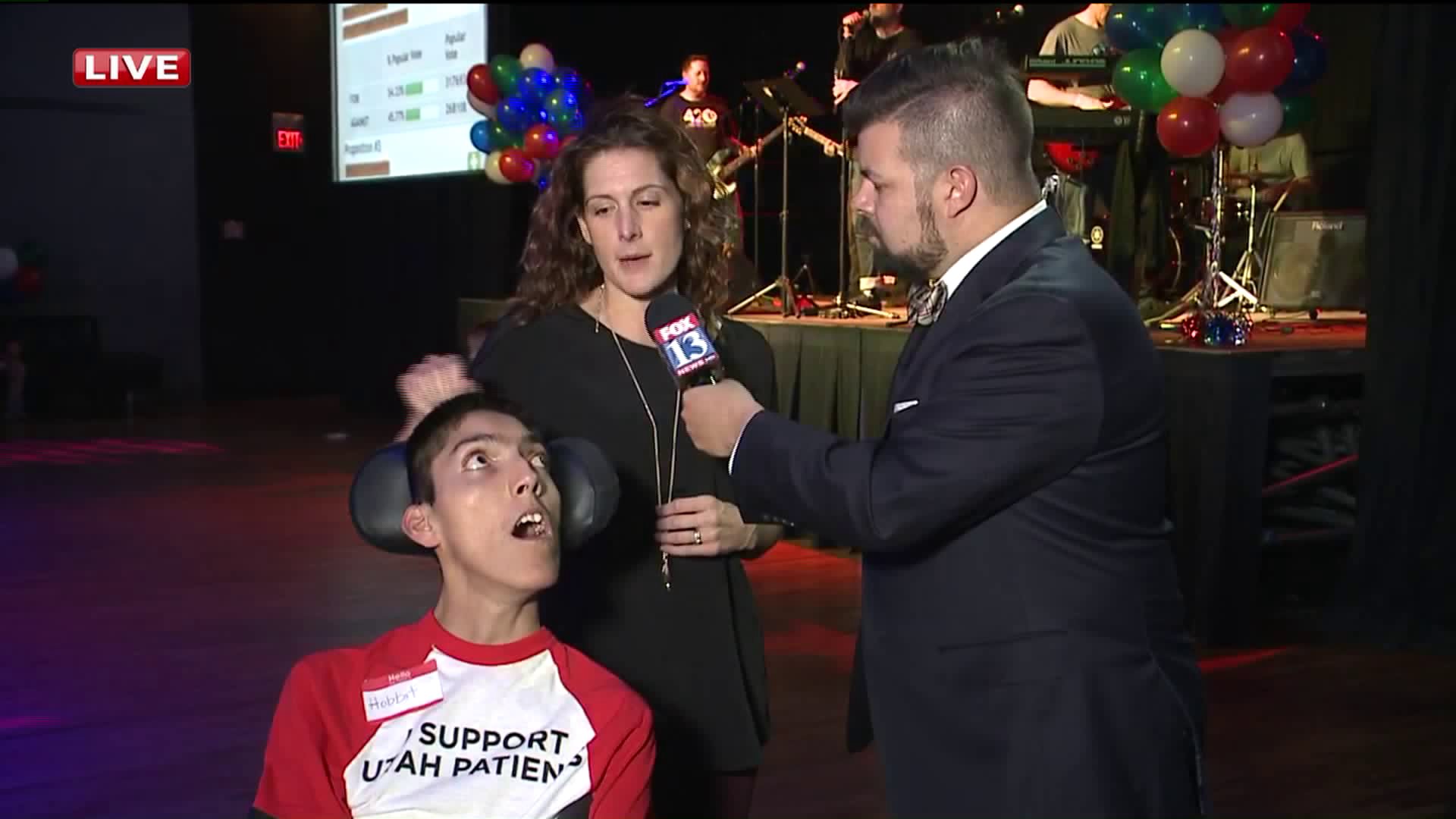 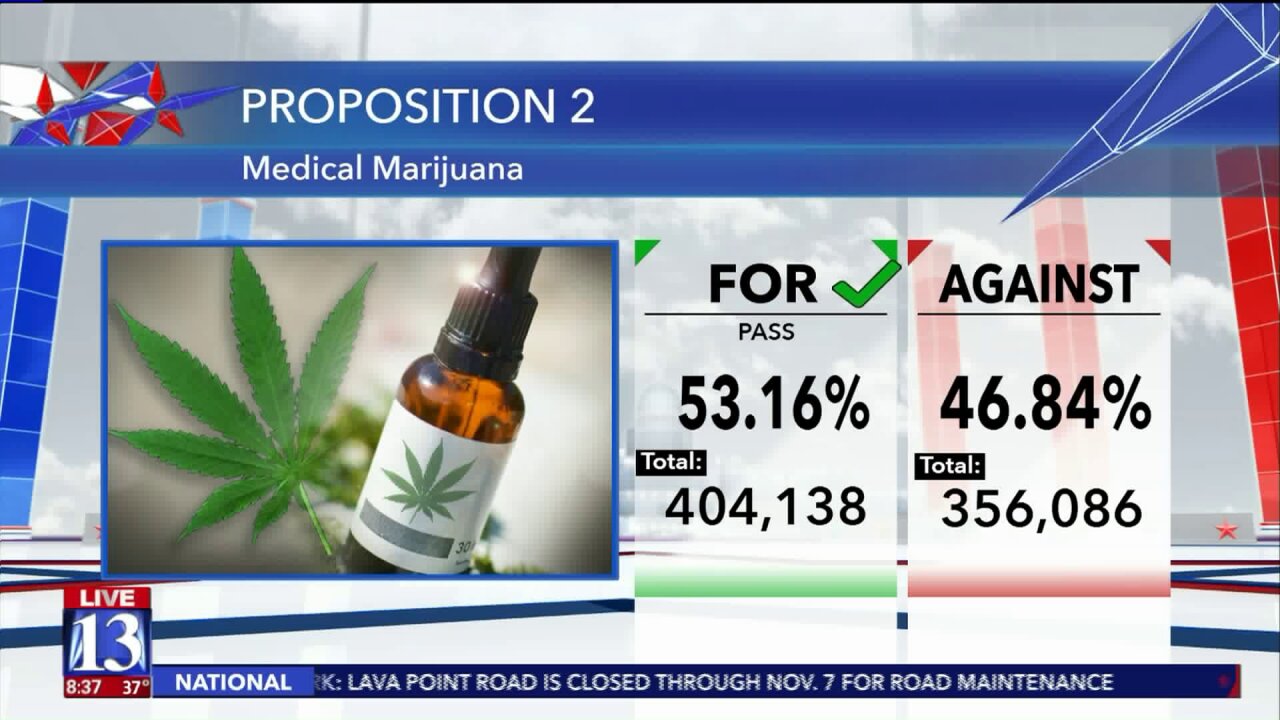 As of 10:15 p.m. on Tuesday, the citizen referendum initiative had 54% of the vote in favor to 45% against. FOX 13 projected the initiative would pass.

At a watch party organized by the Utah Patients Coalition (which sponsored Prop. 2), the crowd burst into cheers at the projection.

"All of our hard work has paid off," said Desiree Hennessy, the mother of a young man confined to a wheelchair who has cerebral palsy and chronic nerve pain.

She told FOX 13 she intended to give her son cannabis under the affirmative defense provision of Prop. 2.

"We wanted to do this right way. We tried to do this the legal way. We’ve wanted to use when it was safe for him. If this happens, it means that we finally get to offer him a life without pain or less pain. That’s something I haven’t been able to give him as a mother. And it’s something I couldn’t give him on my own," she said through tears. "I needed the Utah voters to do that. And I’ll be forever grateful for them helping me to be able to help my son."

"This is a victory for patients in Utah," he said.

Walter Plumb III, one of the leading backers of the anti-Prop. 2 campaign (who sued to try to keep it off the ballot), hoped it would be defeated by voters.

"The people don't want the drug culture in Utah," he told FOX 13 on Tuesday.

The medical marijuana ballot initiative was born out of frustration with legislative inaction. After years of trying to get a medical cannabis bill through the Utah State Legislature, supporters began gathering signatures for what ultimately became Prop. 2.

As the initiative progressed toward the November ballot, the pushback grew. The Church of Jesus Christ of Latter-day Saints jumped into a coalition with the Utah Medical Association, the Utah Narcotics Officers Association, the Episcopal Diocese of Utah some members of the Utah State Legislature and other groups calling themselves "Drug Safe Utah."

The LDS Church said did not oppose medical cannabis itself, so long was it was doctor-prescribed and pharmacy dispensed. However, Prop. 2 supporters pointed out that is currently prohibited by federal law.

Eventually, House Speaker Greg Hughes, R-Draper, launched talks with the Utah Patients Coalition (Prop. 2's sponsor), the Libertas Institute, Drug Safe Utah, the LDS Church and legislative leaders opposed to the initiative. They came to a compromise bill that is expected to be considered in a special session regardless of whether Prop. 2 passes or fails.

But groups like Together for Responsible Use and Cannabis Education (TRUCE), which led the effort on Capitol Hill for medical marijuana, have resisted the compromise bill. They urged voters to approve Prop. 2 to send a message to the legislature.

In a statement on Tuesday night, the LDS Church once again said it would support the "compromise" bill.

"Following the Savior Jesus Christ, relieving human pain and suffering, while protecting children, truly is at the heart of our interest in this matter. We were pleased to come together with the Utah Medical Association and other members of the community to help create a more effective medical cannabis program, which includes avoiding the negative consequences that have manifest in other states. Our expectation is that prompt legislative action will address the shortfalls of the initiative which have been acknowledged by advocates of Proposition 2. The legislative alternative is better public policy and has broad support among Utahns," said LDS Church lobbyist Marty Stephens.

On the eve of the election, a new draft of the compromise bill was unveiled. One of the big changes was stripping criminal background checks from the requirements for medical cannabis patients.

Stenquist said patient advocates would continue to watch over any legislative attempts to restrict access to people with medical needs.

"I think this is a historic moment for Utahns. I think it’s been amazing to watch people cross party lines, religious affiliations to be together, to put something this controversial on the ballot in Utah of all places," she cried. "I think kudos to all of us. I think we’re winning on this one."

The other initiatives had mixed results among voters. Question 1, the gas tax hike for education, was defeated by a 65% to 35% ratio.

"We regret we weren’t successful tonight. The complexity of using a gas tax to offset money being taken from the general fund — from education and to transportation -- was an issue we never got beyond. Immediately following the compromise during the last legislative session our support considerably decreased," Nolan Karras of Our Schools Now said in a statement.

"However, in the process of the campaign we built the strongest political organization for the promotion of public education in the history of the state. Our supporters aren’t going anywhere. There will continue to be a strong voice for improving funding for education."

Proposition 3, full Medicaid expansion, had 55% of the vote in favor of it to 45% against. Proposition 4, the independent redistricting initiative, appeared to barely lead with 51% of the vote.

"Current election returns are too close to declare victory," Prop. 4 backers Jeff Wright and Ralph Becker said in a statement. "We expect after the dust has settled, the will of voters will prove that Utahns are against gerrymandering and for Proposition 4."