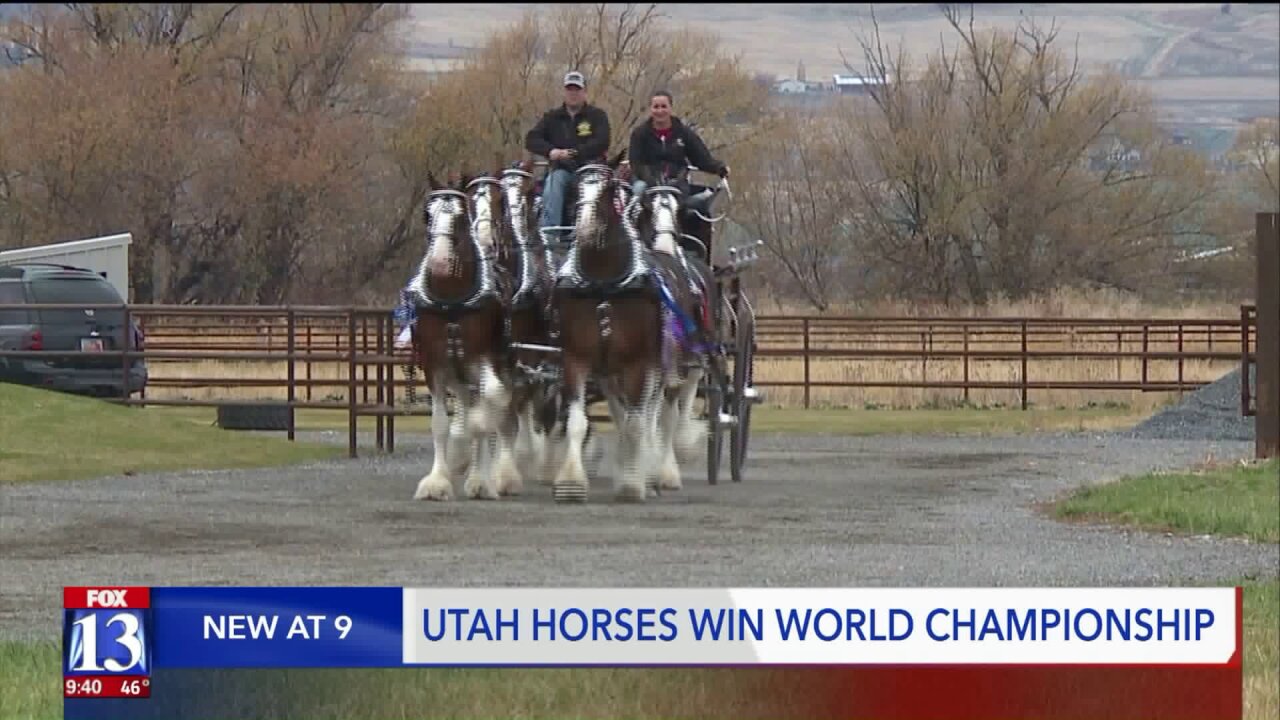 CACHE VALLEY, Utah — A Cache Valley family can boast the best Clydesdale horse team on the globe, after their horses took a world title over the weekend.

When watching the Highpoint Clydesdales, there's a feeling to behold in hearing the clinking harnesses and rhythmic crunching of the prancing hooves while seeing the silent unity.

"You feel that power and majesty they carry," Bret Fielding said.

That power and majesty is what drove him to the sport eight years ago, when Fielding said he watched a team of Clydesdales rush past him and his wife Annette as they sat on the side of the arena ring.

"Just hearing the thunder of their hooves and being so excited, and being taken in," he recounted. "And I felt it in my heart. I don't know how to explain it."

His heart's been leading the way ever since. The family spent time carefully picking out each horse for their team. Three years ago, they said they got serious about competing.

"It is kind of the Olympics of Clydesdales. They do it every four years," Annette Fielding explained.

That three years of practice paid off. The Highpoint Clydesdales took first in three of the competitions — 6-Horse Hitch, 8-Horse Hitch and Supreme 6-Horse Hitch championships.

"We don't know if that's ever been done," Annette Fielding said of winning all three titles.

Rising to the top took a village, and the family explained that everyone pitches in. The Fielding's three sons love to help, along with an entire team of people.

"Even though there's two people on the wagon, there's a whole team in the back that has worked so hard. And, It is a team sport," Annette Fielding said.

She and Bret Fielding said they practice at least a few times a week, and they spent the past several months attending shows around the country as the Highpoints perfected their performance.

Each horse has his own personality, and Annette Fielding said they all stand about  six feet tall and weigh 1,800 to 2,000 pounds.

They only run about five to seven miles an hour, but the couple agrees it feels much faster.

"There's a lot of adrenaline in watching 2,000 pounds [multiplied by] six, thundering around an arena," Annette Fielding said.

Now that these Clydesdales have taken the world title, what's next?

"These guys have worked really hard, and we're going to let them eat some oats and be horses for a little while," Annette Fielding said.

As the horses eat oats and the family lets those championship wins sink in, she said they'll take a couple months to rest.

The family plans to be back at it in January, when they'll attend the Denver Stock Show.

When asked if the Highpoint Clydesdales were the best team in the world, Bret Fielding smiled and said they felt that way.

"To be able to just show our horses at this world show was a dream come true," he said. "To come out on top , and win the six and the eight was beyond what we would have dreamed of."