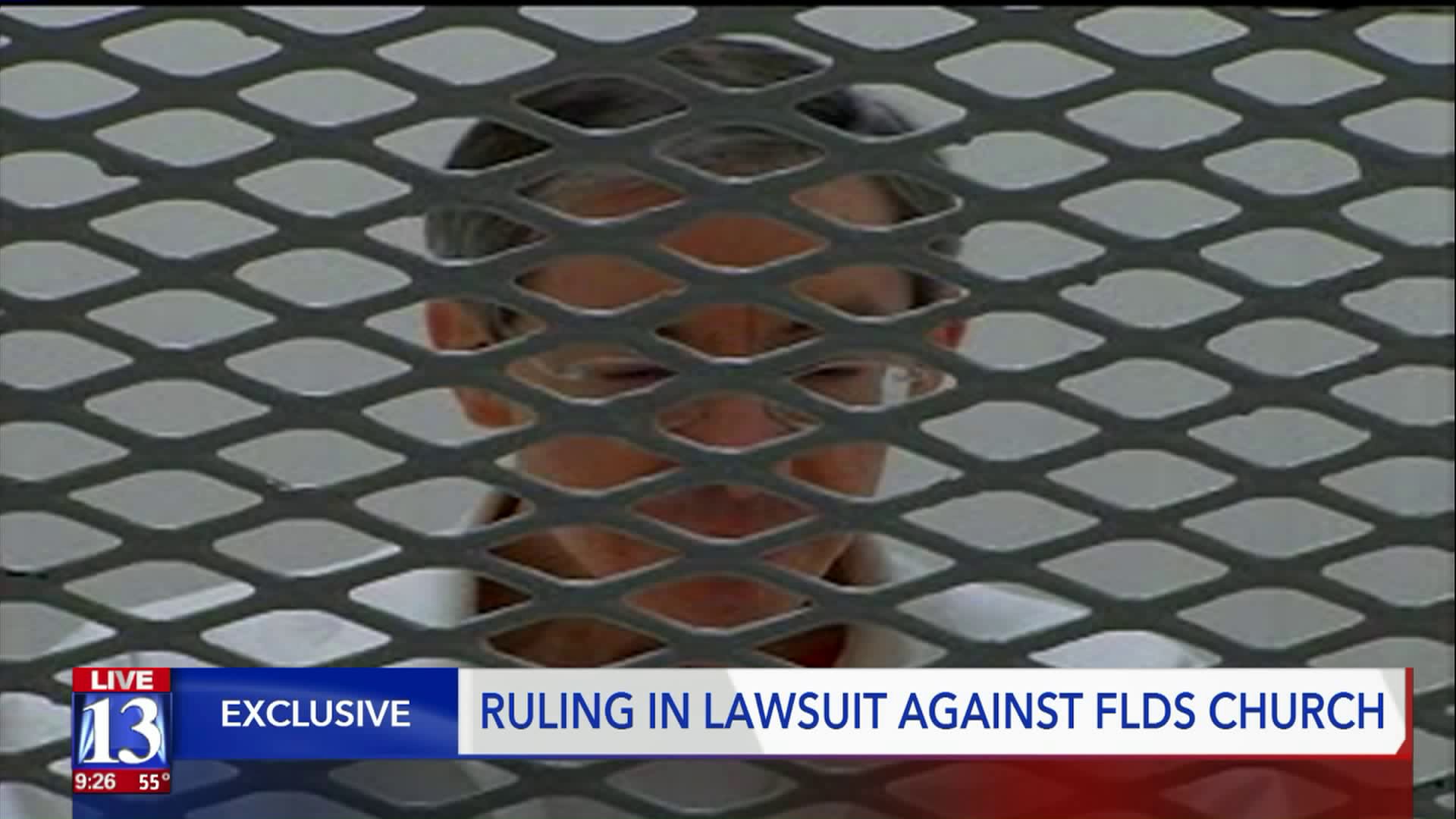 SALT LAKE CITY -- A judge has refused to dismiss a multi-million dollar lawsuit filed by a woman against imprisoned polygamist leader Warren Jeffs, the Fundamentalist LDS Church and others.

In a ruling obtained by FOX 13, 3rd District Court Judge Vernice Trease rejected a motion by attorneys for the United Effort Plan Trust and ex-FLDS leader Wendell Nielsen to dismiss the lawsuit.

"This is a very important matter for our client and we think it's important for everybody," said Alan Mortensen, an attorney for a woman identified only as "R.H." in court papers. "This kind of conduct cannot be tolerated."

The young woman sued Jeffs and other FLDS leaders accusing them of "ritualistic sex abuse." FOX 13 first reported on the woman’s lawsuit last year. She claims that as an 8-year-old girl, she was repeatedly taken from her home with a bag over her head, driven to an unknown location and then sexually abused. Jeffs is currently serving a life sentence in Texas for child sex abuse related to underage “marriages.”

Mortensen said Judge Trease has also ruled that Jeffs and other FLDS Church members named in the litigation were in default after they refused to answer the lawsuit, which seeks potentially millions in damages. (Nielsen has hired an attorney and responded to the lawsuit, as has the court-controlled UEP Trust.)

"Now, the only thing left for judicial resolution are how much the damages are for our client," he said.

The lawsuit will proceed against Nielsen as well as the UEP Trust, which controls land in the border communities of Hildale, Utah, and Colorado City, Ariz. It's where the bulk of the Utah-based FLDS Church's assets are.

"We think it is disappointing that this plaintiff is trying to hold the Trust responsible for the misconduct of Warren Jeffs," said Zachary Shields, an attorney for the UEP. "The Trust is a charitable trust with a beneficiary class consisting mostly of women and children, many of whom were also victims of Warren Jeffs. It is not fair that property which otherwise would be used to help such beneficiaries could be taken by one alleged victim at the expense of so many others."

Shields also said he can't comment on the validity of R.H.'s allegations since her identity has not been disclosed. (The judge has so far forbidden release of her name.)

"If the plaintiff’s allegations are true, then she has suffered horrific abuse at the hands of Warren Jeffs and she should be entitled to pursue her claims against him," Shields said. "The Trust strongly disputes, however, that Warren Jeffs was acting in his role as trustee of the Trust when such abuse took place. Such alleged abuse was far outside the bounds of any legitimate work of the Trust."

The Trust did win a small victory. Judge Trease agreed to move the trial from Salt Lake City to St. George. However, R.H.'s attorneys told FOX 13 they would try to move it back concerned about St. George's proximity to Hildale and Colorado City.

"We would like a fair trial, to get a jury that will be able to be fair and to be able to get R.H. her day in court in Salt Lake," said Lance Milne, another of the woman's attorneys.

Jeffs still leads the FLDS Church from his prison cell, even though membership has scattered across the intermountain West as land in Hildale and Colorado City has been subdivided as a result of court-ordered reforms to the UEP.

R.H.'s attorneys are now preparing to take Jeffs' deposition as the lawsuit moves forward. But they aren't expecting much. In previous depositions, Jeffs has refused to answer even the most simple questions asked of him.

That was the situation in the most recent videotaped deposition obtained by FOX 13. It was for a multi-million dollar lawsuit filed by Elissa Wall, who was married at age 14 to her cousin in a ceremony presided over by the FLDS leader. Wall was the star witness in Utah's criminal prosecution of Jeffs on rape as an accomplice (that was later overturned by the state supreme court). She sued him in civil court and won millions.

On the 2014 video, Jeffs raises his right hand as an oath is read. His hair is graying and he wears spectacles as he looks at lawyers from inside a cage.

"Do you solemnly swear the testimony you're about to give in this cause is the truth, the whole truth and nothing but the truth, so help you God?" a woman asks.

"Yes, I do," Jeffs softly replies.

FLDS leader Warren Jeffs in a 2014 deposition provided to FOX 13.

Wall's attorney, Michael Worel, tries a few questions and Jeffs responds by saying: "I refuse to answer based on my rights under the Fifth Amendment of the United States Constitution."

"I want to explain something to you concerning the law in Utah if I might, sir," Worel replies. "There is a presumption that attaches to your answers when you claim the Fifth Amendment. Do you understand that your failure to respond to valid questions on the basis of privilege against self-incrimination may give rise to an adverse inference against you in the trial?"

"I refuse to answer based on the Fifth Amendment of the United States Constitution."