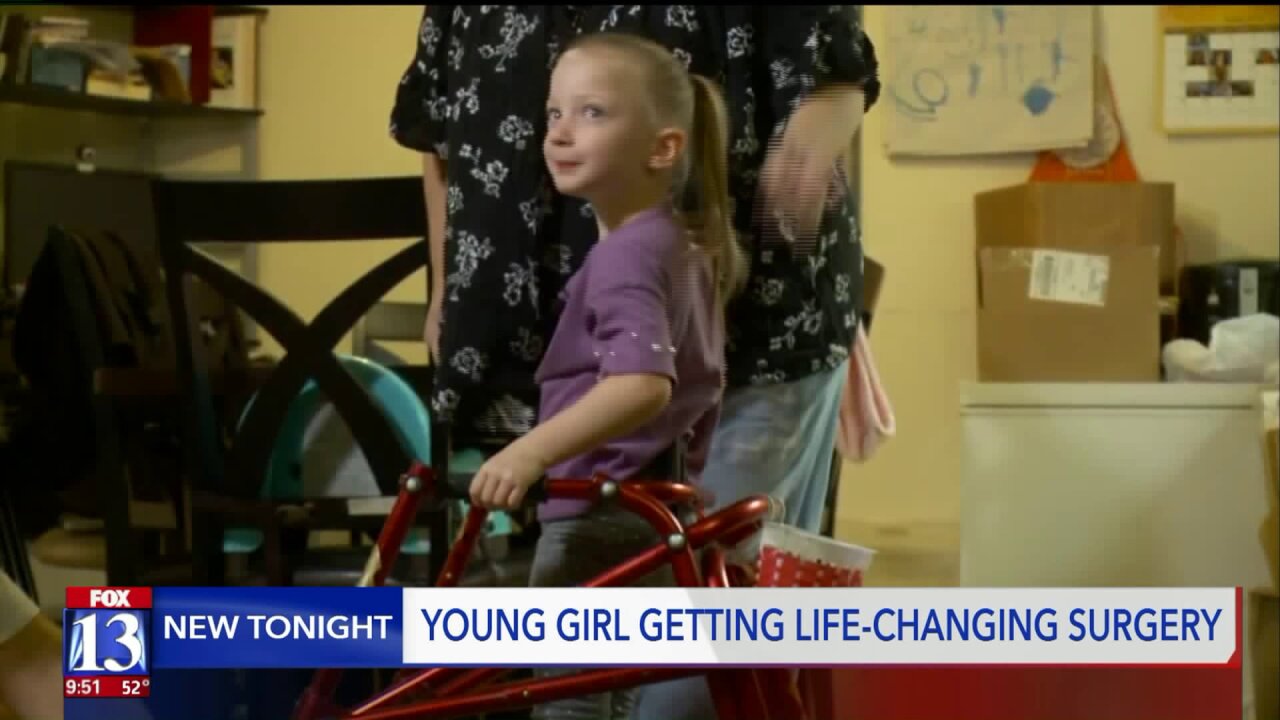 COTTONWOOD HEIGHTS, Utah — The family of a Utah 4-year old with cerebral palsy found out Wednesday that she'll soon undergo a life-changing procedure that will allow her to walk on her own.

Up until recently, Bailey Wilson's family didn't think she'd be able to walk. Right now, she wears ankle braces and uses a walker. But that doesn't slow the bright, laughing little girl down.

You'll find Bailey in the family room playing pretend, baking a cake and making tea in her chef hat and apron.

Or she might be across the room having fun as she presses keys on her piano. The family kitten, Kovok, keeps Bailey squealing with his silliness.

Bailey's mother, Catrina Wilson, said her daughter tries, in her own way, to do anything anyone else can, but some activities are almost impossible to accomplish.

"She sees others kids dancing, and she just, she wants to so badly," Catrina said. "She's mentioned it a few times."

"She's not able to walk without a walker or without holding our hands," she said.

To Bailey, it's called the "dragon."

"His name is, 'Spasticity'" Bailey said while kneeling in front of her play pretend kitchen.

Catrina said it's only going to get harder as Bailey gets older. Recently, the family found out about a procedure that could change Bailey's world.

"She should be able to walk independently, without a walker across all environments, which is dream come true," Catrina said.

The Wilson family found out that Bailey was a good candidate for surgery in September. It would be performed by neurosurgeon Dr. T.S. Park at St. Louis Children's Hospital.

They found out Wednesday that the surgery is a go, and will happen on January 29.

"It just pulls at my heartstrings because the freedom that it's going to allow for her, it's just... it's unreal," Catrina said.

Bailey knows about Dr. Park, but to her, he's more of a knight.

"He's going to fight the dragon," she said.

He'll battle the dragon, so that one day she can dance — and do everything any other 4-year-old can do.

The Wilson family has a GoFundMe page dedicated to raising money for Bailey's procedure. So far, they have 16 percent of the needed funds.