Across the US, more cities ditch Columbus Day to honor Indigenous People’s Day 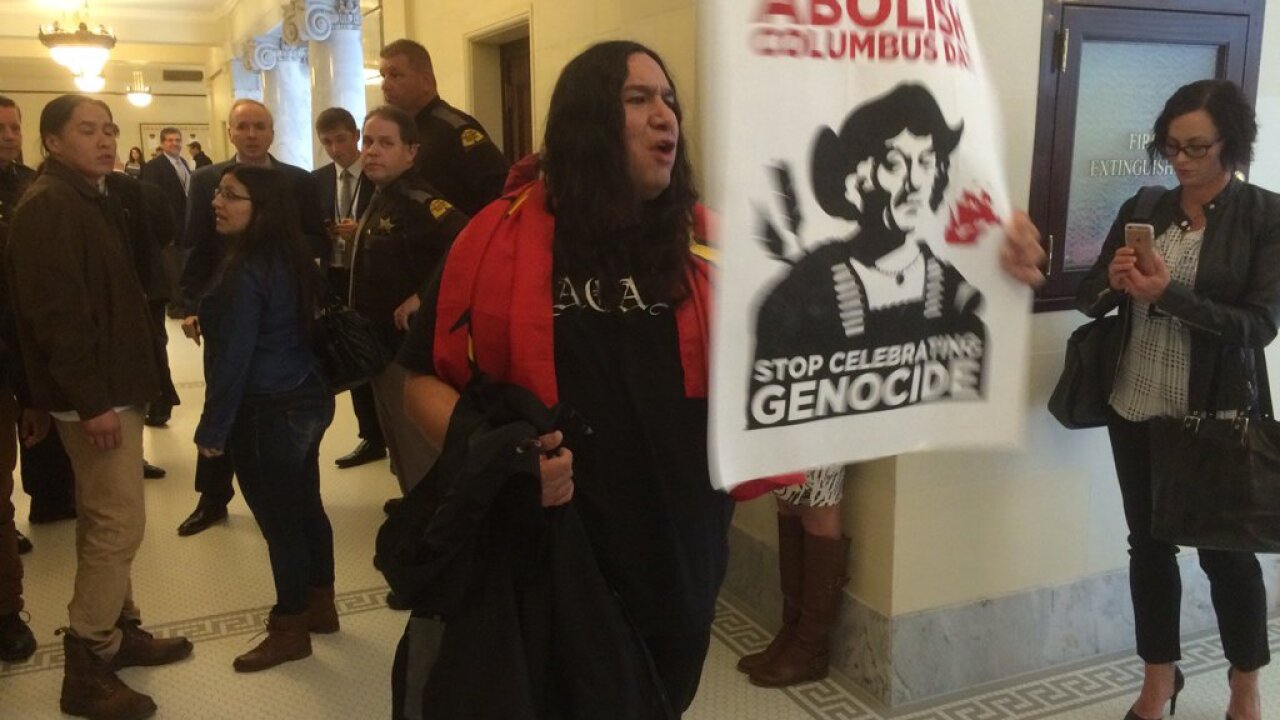 A man waves a sign protesting the defeat of a bill that would have renamed Columbus Day as “Indigenous People’s Day.” (Photo by Ben Winslow, FOX 13 News)

(CNN) — By now, you probably know Christopher Columbus didn’t discover America. He wasn’t even the first European to do it.

Somehow, the 15th-century Italian explorer still got his own national holiday. But more cities and states are scrapping Columbus Day to honor the people who were here first — and who suffered greatly after Columbus’ arrival.

Just this year, at least a dozen US cities — including San Francisco and Cincinnati — decided to stop observing Columbus Day and will instead celebrate Indigenous Peoples Day on Monday.

For Joe Curtatone, the mayor of Somerville, Massachusetts, the decision was easy.

“Columbus Day is a relic of an outdated and oversimplified version of history,” the mayor wrote when announcing the decision last month.

“This issue is a lot like the Confederate flag for southerners. As an Italian-American it feels good that there is an official holiday that is nominally about us. We are proud of our heritage. Yet the specifics of this holiday run so deep into human suffering that we need to shift our pride elsewhere.”

So what did Columbus really do?

He wasn’t the first to discover the New World, the term generally used to refer to the modern-day Americas. Indigenous people had been living there for centuries by the time Columbus arrived in 1492.

He wasn’t the first European in the New World, either. Leif Eriksson and the Vikings beat him to it five centuries earlier. But Columbus did pave the way for the “European exploration, exploitation, and colonization of the Americas,” according to the Encyclopedia Britannica.

While many schoolchildren learn about the Niña, the Pinta and the Santa Maria, less appealing details of Columbus’ journeys include the enslavement of Native Americans and the spread of deadly diseases.

The indigenous societies of the Americas “were decimated by exposure to Old World diseases, crumbling under the weight of epidemic,” historian David M. Perry wrote.

“Columbus didn’t know that his voyage would spread diseases across the continents, of course, but disease wasn’t the only problem. … He also took slaves for display back home and to work in his conquered lands.”

But there’s no doubt that Columbus’ voyages “had an undeniable historical impact, sparking the great age of Atlantic exploration, trade and eventually colonization by Europeans,” Perry wrote.

President Benjamin Harrison started celebrating Columbus Day in 1892 to mark the 400th anniversary of Columbus’ landing in the Bahamas. In 1934, President Franklin D. Roosevelt made Columbus Day a national holiday.

Since 1971, presidents have traditionally written a proclamation for every second Monday of October.

But the proclamations from the last two presidents couldn’t be more different.

“The permanent arrival of Europeans to the Americas was a transformative event that undeniably and fundamentally changed the course of human history and set the stage for the development of our great Nation,” Trump wrote.

“Therefore, on Columbus Day, we honor the skilled navigator and man of faith, whose courageous feat brought together continents and has inspired countless others to pursue their dreams and convictions — even in the face of extreme doubt and tremendous adversity.”

Contrast that with President Barack Obama’s proclamation a year earlier, which lauded Columbus’ ambition but also acknowledged the uglier side of Columbus’ voyages.

“As we mark this rich history, we must also acknowledge the pain and suffering reflected in the stories of Native Americans who had long resided on this land prior to the arrival of European newcomers,” Obama wrote, citing “violence, deprivation, and disease.”

“As we reflect on the adventurers throughout history who charted new courses and sought new heights, let us remember the communities who suffered, and let us pay tribute to our heritage and embrace the multiculturalism that defines the American experience.”