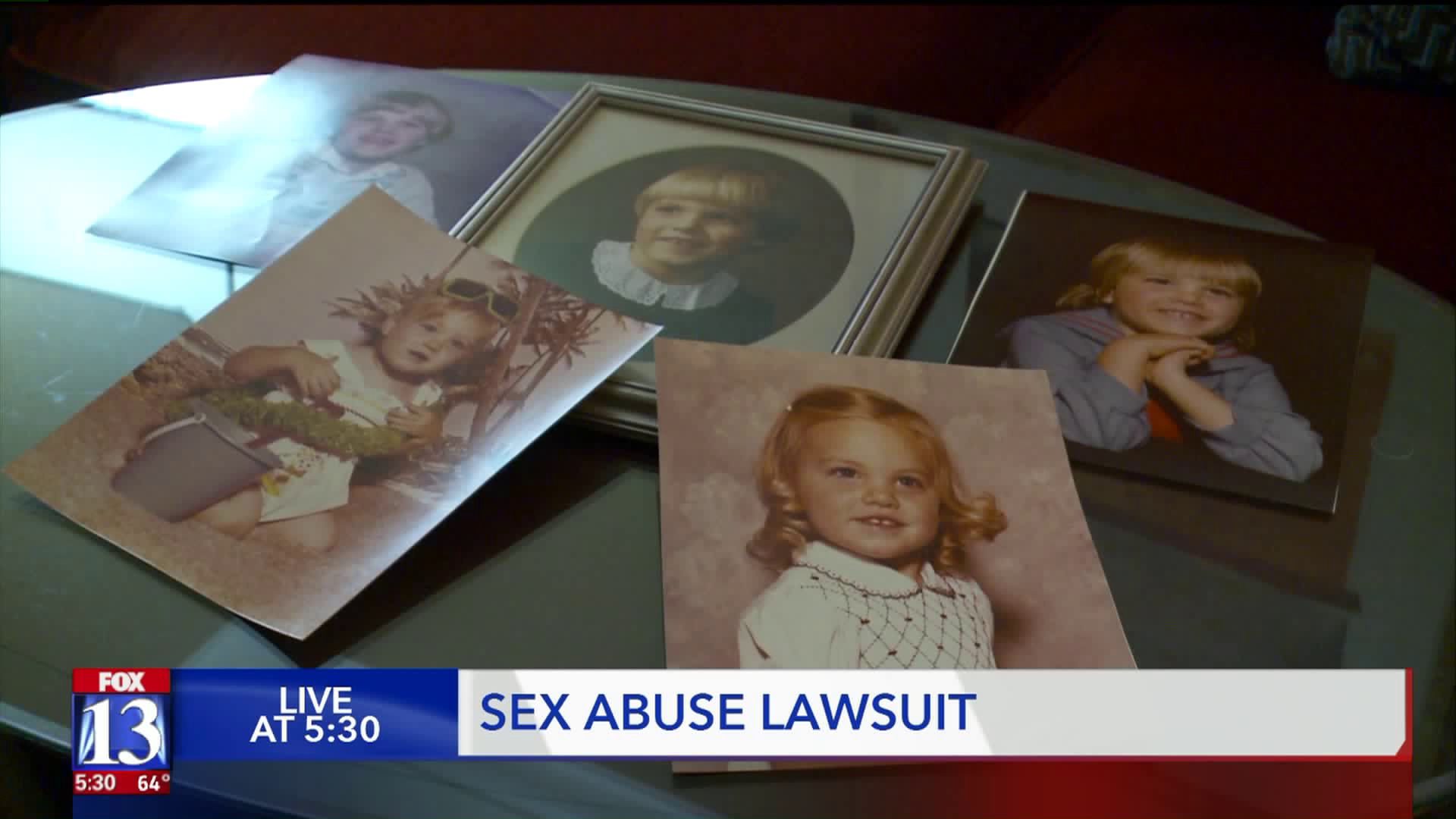 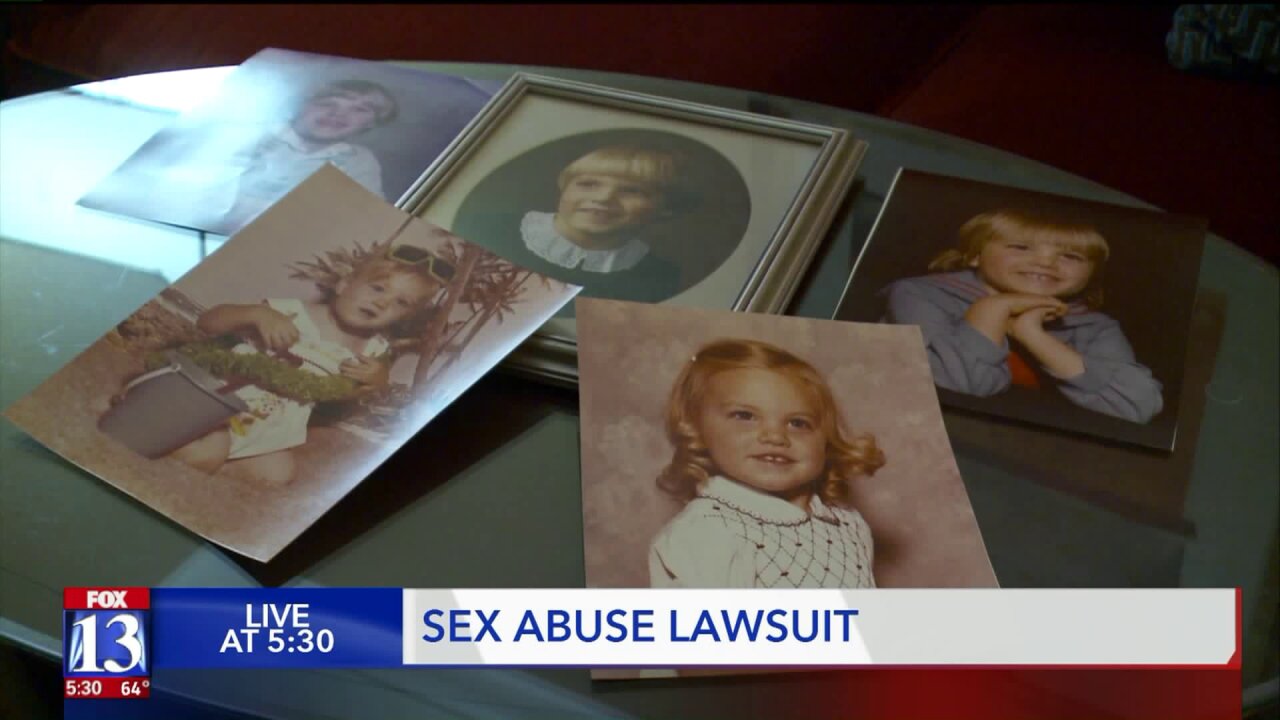 SALT LAKE CITY — A lawsuit alleging sexual abuse and a cover up has been filed against the daughter and son-in-law of the president of The Church of Jesus Christ of Latter-day Saints.

The lawsuit was filed in federal court in Salt Lake City on Wednesday by six unnamed people listed only as "Jane Doe" and "John Doe" against unnamed "Doe 1 Male Defendant" and "Doe 2 Female Defendant." However, Brenda and Richard Miles' attorney publicly disclosed their names after the lawsuit was filed and said they vigorously deny the allegations.

FOX 13 spoke with several of the plaintiffs on the condition that their names not be used nor their faces shown.

"Victims need to be listened and heard and have a voice. I think now there’s a chance some members of the Mormon community will believe us. I’m certain there’s some who will not because of who the defendants are," said a woman known in the lawsuit as "Jane Doe 2," who alleges she was sexually abused as a child.

The lawsuit alleges that in 1985, a man only identified as "Perpetrator" in the court papers sexually abused his children. It also claims a 16-year-old babysitter was both a victim and perpetrator of abuse (who later committed suicide). Then it accuses the Miles of abuse.

Images of some of the alleged victims of sexual abuse as children in family photographs. They provided the images to FOX 13.

The lawsuit alleges the children were sexually abused repeatedly. The children disclosed to their mother their abuse and claimed “DOE 1 MALE DEFENDANT, who was the Second Counselor of this LDS ward at the time,” was one of those who abused them. It also alleges “DOE 2 FEMALE DEFENDANT” is the daughter of an LDS apostle.

The mother of the children, who spoke to FOX 13, said she reported the abuse to police who didn't pursue it very far. She also said LDS Church leaders did nothing, but Elder Neal A. Maxwell gave them a priesthood blessing instructing them to "forgive and forget."

"I assumed the highest leaders in the church would want to help my children heal that the perpetrators would be put in jail. I was very quickly disillusioned about that," she told FOX 13.

The mother said she divorced her husband, who later re-married. The children in that marriage joined the lawsuit and allege their stepfather abused them. One of the women, identified as "Jane Doe 3" in court papers, said if police and the LDS Church had acted -- she never would have been abused.

"Of somebody would have done the right thing the first time, the abuse would never have happened. It was pretty horrific," she told FOX 13.

The lawsuit said Jane Doe 3's mother ultimately reported the abuse to state authorities in 1995 and her stepfather killed himself when police sought to arrest him.

Two of the alleged victims who are suing alleging sexual abuse in the 1980s involving the daughter and son-in-law of LDS Church President Russell M. Nelson. (Image provided to FOX 13)

“Since January of 1986, DOE 1 MALE DEFENDANT and DOE 2 FEMALE DEFENDANT have successively utilized their status within the Church, both as leaders in their own right and as the daughter and son-in-law of an Apostle of the Church, to cover up the crimes they committed against JANE DOE 1, JANE DOE 2, and JOHN DOE 1. This included (lockstep with Perpetrator) lying to the police and influencing the criminal investigation; influencing leaders of the Church to ignore Church policy and not convene a Church disciplinary hearing against themselves or Perpetrator; and further actions which encouraged and enabled Defendants and Perpetrator to escape criminal prosecution and not be excommunicated from the Church for the heinous sexual crimes they committed against these children,” the lawsuit claims.

"There’s no truth to these allegations. The Miles did not abuse these children or anyone else," Jim Jardine told FOX 13 on Wednesday. "To do so would be out of their values, their belief system and their character."

Jardine said Bountiful police investigated the crime in the 1980s when the accusations were first leveled and concluded there was nothing to it. Within hours of the lawsuit being filed, Jardine filed a motion to dismiss with the U.S. District Court in Salt Lake City.

Jim Jardine, the attorney for Richard and Brenda Miles, in an interview with FOX 13's Ben Winslow. (Image by Pete Deluca, FOX 13 News)

He suggested the children were given "false memories" by a therapist.

"These allegations were investigated in the 1980s by three different law enforcement agencies who found no evidence of any child sex abuse ring in Bountiful and filed no charges against my clients," Jardine said.

In their own statement released through their attorney, the Miles' said they would defend themselves.

"While it pains us to engage in litigation with former neighbors, especially individuals who have so clearly faced significant challenges in life, with the lawsuit they have filed, we are left with no choice but to defend ourselves in the court of law and in the court of public opinion. The allegations against us are false. While we feel deep sadness and concern for these individuals, any abuse they suffered did not involve us," they said in the statement.

The lawsuit does not name the LDS Church itself nor anyone else. Vernon told FOX 13 he reserved the right to amend the lawsuit later to include others. That could include LDS Church President Russell M. Nelson.

"We believe there will be additional evidence to show this person along with other people worked in tandem with the defendants to basically cover up the crime of the sexual assaults, the sexual abuse," Vernon said.

Craig Vernon, the attorney for the alleged victims, in an interview with FOX 13. (Image by Pete Deluca, FOX 13 News)

Vernon has specialized in clergy abuse lawsuits. Most recently, he has represented McKenna Denson in her high profile lawsuit against the LDS Church alleging rape in the 1980s at the Missionary Training Center. He has also sued the LDS Church over allegations of sexual abuse of Native American children and Boy Scouts.

The lawsuit was filed in U.S. District Court in Salt Lake City on Wednesday. It seeks unspecified damages.

The LDS Church released a statement on Wednesday in response to inquiries from FOX 13 and others about the lawsuit.

"Protecting and nurturing children is important to The Church of Jesus Christ of Latter-day Saints, and we handle issues of this nature with the utmost seriousness. These allegations of interference or coverup are baseless and offensive. Law enforcement investigated this matter in the 1980s and took no action against the Church or its leaders. We will continue to act responsibly and appropriately in addressing these matters," the church said.

Jane Doe 3 said she wants justice through the courts.

"Their lives and comfort, whatever, it’s not more important than me and my whole life has been pretty difficult and I know it stems from the abuse that should never have been allowed to happen," she said.