Another political family feud emerges, this time in the Nevada governor’s race 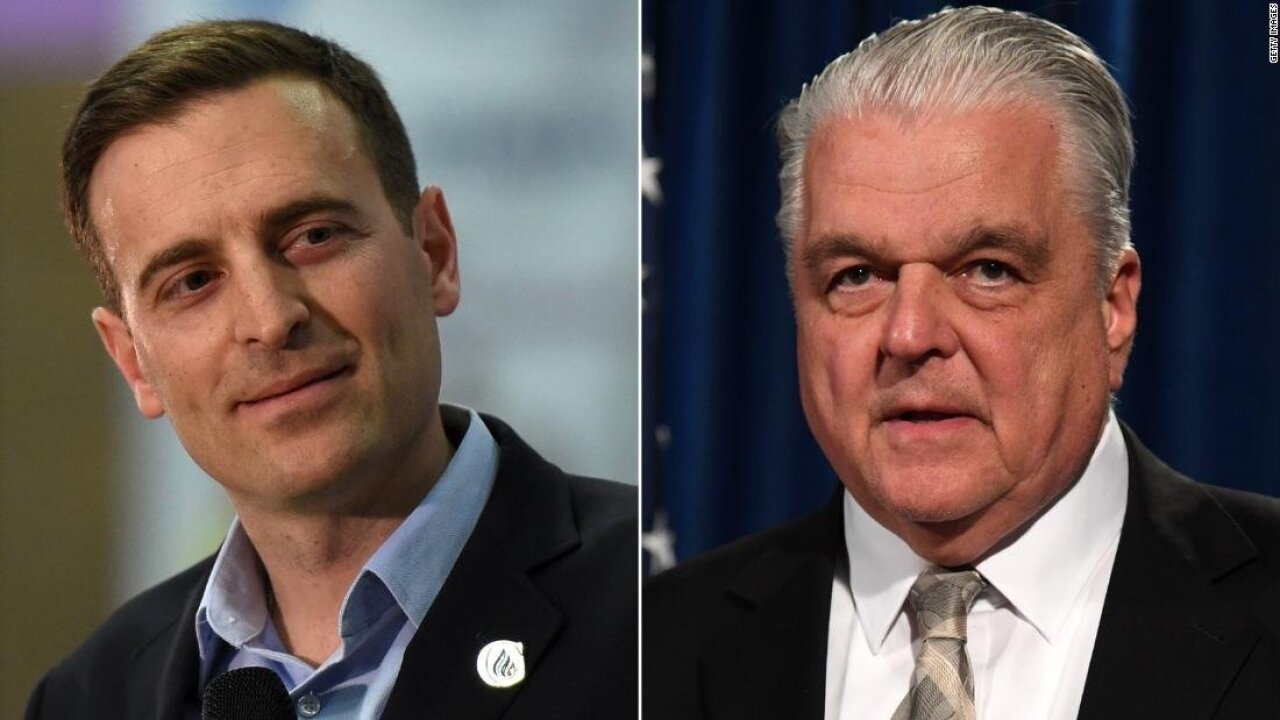 Blood is not thicker than politics. That’s the message from seven members of Nevada Republican gubernatorial nominee Adam Laxalt’s family, who blasted his candidacy at a fundraiser for his Democratic opponent, Steve Sisolak.

(CNN) — Blood is not thicker than politics.

That’s the message from seven members of Nevada Republican gubernatorial nominee Adam Laxalt’s family, who blasted his candidacy at a fundraiser for his Democratic opponent, Steve Sisolak.

Laxalt, who is the state attorney general, and Sisolak, who chairs the Clark County Commission, are locked in a tight race for the chief executive spot in a critical swing state.

The fundraiser, hosted by two of Laxalt’s cousins, Kristin and Monique Laxalt, took place earlier this week in Reno, Nevada.

“We feel an obligation to speak out in opposition to Adam Laxalt’s candidacy,” Monique Laxalt says in her opening remarks at the fundraiser. “Lest there be any misunderstanding, that because he carries our family name, that he represents our family’s values.”

In the remarks, Monique Laxalt says she was there with “several members” of her family.” The other six family members ranged from aunts to cousins, according to a source who attended the fundraiser.

You can’t choose your family

Laxalt’s relatives’ endorsement of his Democratic rival comes after other stunning public displays of family infighting over politics. Days earlier, six siblings of Rep. Paul Gosar, R-Arizona, endorsed his Democratic opponent, David Brill, in a searing political ad. They, like the Laxalt relatives, called it a moral imperative to speak out against their family member.

In response, Gosar, the oldest of 10 children, wrote on Twitter, “You can’t pick your family. We all have crazy aunts and relatives etc and my family is no different. I hope they find peace in their hearts and let go all the hate. To the six angry Democrat Gosars — see you at Mom and Dad’s house!”

Gosar also tweeted that the siblings were disgruntled Hillary Clinton supporters who hate President Donald Trump and “put political ideology before family. Stalin would be proud.”

In August, another political family feud was exposed on Twitter between retiring Rep. Robert Goodlatte, R-Virginia, and his son, Bobby Goodlatte, who announced in a tweet that he had donated the maximum amount to Jennifer Lewis, a Democrat mounting a long-shot bid for his father’s open seat — and had gotten five others to do the same.

The lawmaker’s son followed this up with a tweet the next day blasting his father’s role in the saga leading up to the ouster of FBI agent Peter Strzok, who had been removed last year from the special counsel probe into Russian interference in the 2016 election for sending text messages critical of President Donald Trump.

“I’m deeply embarrassed that Peter Strzok’s career was ruined by my father’s political grandstanding,” he tweeted. “That committee hearing was a low point for Congress. Thank you for your service sir. You are a patriot.”

The Laxalt family name is a storied one in Nevada politics.

Adam Laxalt is the grandson of Paul Laxalt, who was Nevada’s governor from 1967 to 1971 and then a US senator from 1974 to 1987. History remembers Paul Laxalt, who died last month at the age of 96, as the chairman of Ronald Reagan’s presidential campaigns; he was so close to Reagan during his presidency that the Washington press corps in those years referred to Laxalt as “the first friend.”

While a senator, Laxalt served alongside Sen. Pete Domenici of New Mexico. In 2013, Domenici and Laxalt’s daughter, Michelle Laxalt, revealed they had an affair in the late 1970s, while Domenici was married and was serving in the same chamber as her father. Michelle Laxalt, then 24, gave birth to Adam Laxalt. A private lawyer at the time of the revelation, Adam Laxalt was suddenly thrust in to the public sphere. The next year, in 2014, he won the race for Nevada attorney general.

During Adam Laxalt’s candidacy for attorney general, his relatives penned a letter to the editor in the Las Vegas Sun endorsing his Democratic opponent. The letter spoke highly of Laxalt’s opponent, but didn’t directly tear into their relative.

Sights on the governor’s mansion

As Adam Laxalt eyes the Nevada governor’s mansion, his relatives are now taking direct aim at why they don’t want this Laxalt to be in the job their forebear once held.

“We believe that he came from Washington to Nevada for the sole purpose of using the family name to pursue a political career which would allow him to eventually return to Washington as one of Washington’s most elite,” Monique Laxalt told the fundraiser attendees. “We do not believe he came to Nevada based on any true connection to or interest in this state. Four years ago with Washington money, he proceeded to capitalize on our family name to get elected as attorney general of this state.”

This might seem a somewhat quaint family dispute made public, except the race has been close, according to a number of polls.

A member of the Laxalt family, who requested not to be identified by first name, told CNN the dispute is not a family vendetta, but about the policies affecting Nevada. The family member did say that those Laxalts who oppose Adam Laxalt’s campaign are Democrats.

In her fundraiser remarks, Monique Laxalt laid out several areas of policy disagreement with her cousin, including his opposition to the state’s “commerce tax,” which applies to businesses with gross revenues of more than $4 million, and gun control. She referenced Brian Sandoval, the popular, termed-out Republican governor, and how the family felt that as attorney general, Laxalt “effectively spat in the face of one of the finest governors Nevada has ever had.”

Laxalt and Sandoval, a moderate Republican who has supported some Democratic priorities, such as Obamacare, have publicly butted heads while in their respective offices on key policy issues, including the commerce tax, which Sandoval supported in 2015 as a way to boost education funding. Laxalt has said he wants to repeal the tax.

In her fundraiser remarks, Monique Laxalt concludes, “We believe that he not only has no true connection to Nevada but has demonstrated a disdain for our beloved state and to its people. We do not believe Adam Laxalt represents Nevadans or has the interests of our people at heart. We believe that Steve Sisolak does. And as third-generation Nevadans, we strongly endorse the candidacy of Steve Sisolak for governor.”

Laxalt spokesman Parker Briden sent CNN a statement from the campaign that called the family feud “petty, political and sad.”

The Laxalts are “a large family — some are lifelong liberals, Democrat donors, and operatives,” the statement said. “For a distant cousin to attack Adam for coming home to raise his family in Nevada after his service in Iraq and in the Navy shows how petty and political these attacks are. It’s no surprise — this same thing happened when Adam ran for attorney general. It’s a sad sign of the times that partisan politics always comes first for some people.”

The statement also said Laxalt has a record of protecting seniors, veterans and women and added that he has received broad support across the political spectrum and “represents Nevada values.”

Laxalt has also received the endorsement of Trump, who wrote on Twitter that the candidate is “smart, works hard, and knows how to win. He will be a great Governor. Also, will fight hard to lower your taxes and is tough on crime!”

In a statement, Sisolak spokeswoman Christina Amestoy welcomed the support of Laxalt’s relatives.

“The late U.S. Senator Paul Laxalt was loved and respected by the state and his family because he put Nevadans first,” Amestoy said. “It’s humbling that Adam Laxalt’s family is standing with Steve because they know he is the candidate who will carry on that legacy.”