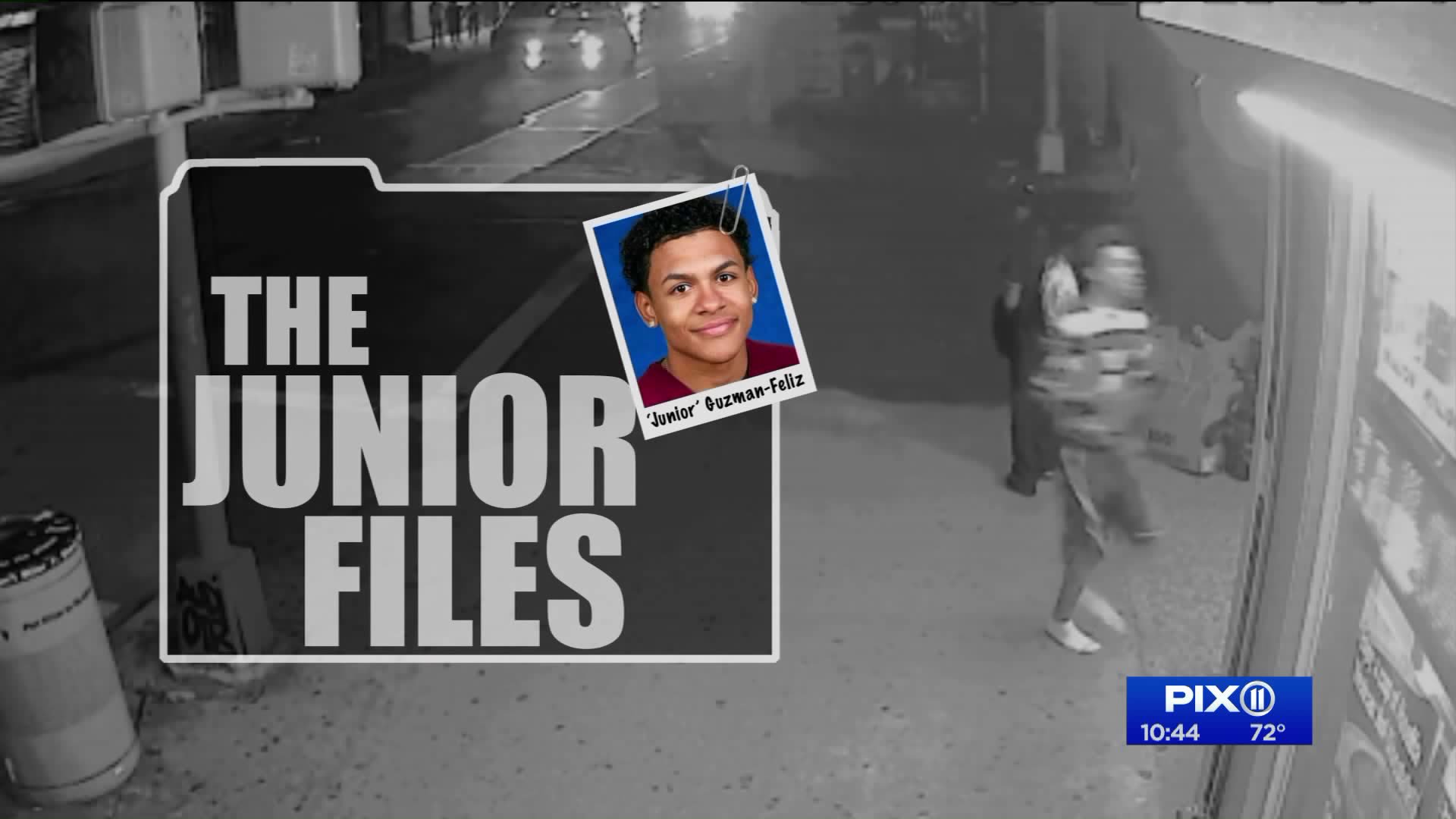 PIX11 reviewed more than a dozen surveillance videos, including a heartbreaking scene that shows the mortally wounded teen, with a lethal stab wound in his neck, walking slowly across Third Avenue at East 183rd Street toward St. Barnabas Hospital.

NEW YORK – Surveillance footage obtained by WPIX shows suspected members of the Trinitarios gang hunting 15-year-old Lesandro “Junior” Guzman-Feliz through the streets of the Bronx as the teen desperately tries to find safety before being hacked to death June 20, 2018.

Video shows the teen racing down East 183rd Street toward Bathgate Avenue just after 11:35 p.m., running so fast that he lost his sandals, with multiple men and two cars at his heels.

Two other vehicles come from a different direction — all of them packed with people intent on settling a score. Police said Junior was the wrong target. The teen is seen from several angles pushing open the front door of the Cruz and Chicky bodega, where he jumped behind the counter.

WPIX reviewed more than a dozen surveillance videos, including a heartbreaking scene that shows the mortally wounded teen, with a lethal stab wound in his neck, walking slowly across Third Avenue at East 183rd Street toward St. Barnabas Hospital.

This was one block from the bodega, where Junior was set upon just after 11:38 p.m. by crazed men with a machete and knives.

The savage stabbing of Junior took just 20 seconds, before a suspect in a red hat, identified as Jonaiki Martinez Estrella, pushed the critically wounded teen toward the bodega door.

We see new perspectives of the dying teen stumbling to the counter for help, where an annoyed, elderly customer waiting to pay for potato chips and soda pointed Junior toward the door—and the hospital up the street.

Within minutes, Junior had collapsed by the St. Barnabas security booth, just as an ambulance passed by. When a crowd gathered, a police SUV pulled up to the scene.

WPIX started reviewing the new evidence last Thursday, which include hundreds of pages of documents, photographs, and videos that illustrate more of what happened on the street—and inside the bodega.

Junior’s mother said she learned after her son’s death that he had headed toward Adams Place about 11:30 p.m. on the night he was killed.

This was several minutes from his family’s apartment.

A source told WPIX a 4-vehicle convoy packed with gang members started chasing the teen near D’Auria-Murphy triangle, with Junior running down East 184th Street, making a left on Third Avenue, and then a right on East 183rd Street, sprinting toward the bodega.

Surveillance footage from outside 543 East 183rd Street, up the block from the bodega, shows three very determined men walking fast—or running—seconds after Junior dashed by on the street.

The men were identified as Jose Muniz, wearing a white t-shirt, Jose Tavarez—dressed in black—and Danel Fernandez, who has a green du rag on his head and is wearing an American flag t-shirt.

Martinez Estrella is seen on one camera brandishing a huge knife as he approaches the bodega.

He doesn’t go in. Instead, he moves to a corner of the doorway and shoves the knife into his pants, under his red t-shirt.

Tavarez enters the store just four seconds after Junior, spying the terrified teen behind the counter and then spinning around to summon more people into the shop.

Sosa Reyes is seen demanding that Junior be released to the group. A source told WPIX Sosa Reyes told the owner, Modesto Cruz, that Junior had attacked his grandmother.

Sosa Reyes leaves the shop before Alvarez and Tavarez are seen dragging the teen from the back of the store.

He is now a cooperating witness.

One of the outside cameras shows an FDNY ambulance slowly passing the bodega’s entrance, oblivious to the fact that Junior was being beaten inside and dragged.

It was 19 seconds before Junior was pulled out the front door to the sidewalk, where he was set upon by the mob.

Yet another camera angle shows the suspect identified as Elvin Garcia, his face covered with a black scarf, lunging toward Junior with a knife and stabbing him in a frenzy, an estimated five to eight times.

Muniz is seen hacking Junior with a machete.

One of the more striking images on the surveillance footage shows the elderly customer, who had been irritated by the fight in the store and Junior’s return for help, flashing money toward the counter after Junior stumbled out with the mortal neck wound.

The customer waved his bills while the owner was on the phone, reportedly calling 911.

The customer finally got his chips and soda, and the owner threw a plastic bag at him to carry the snacks outside.

PIX11.com will have exclusive reports on the murder of Lesandro “Junior” Guzman-Feliz all week.