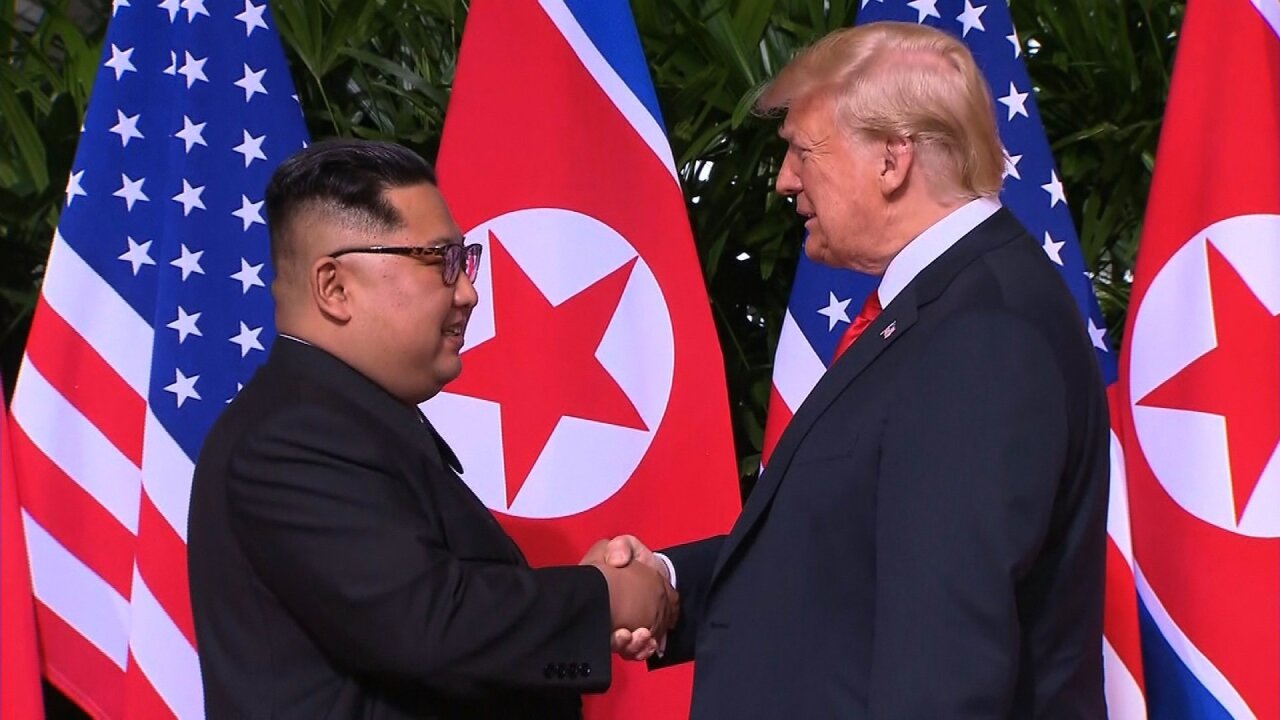 US President Donald Trump shook the hand of North Korean leader Kim Jong Un when the two met Tuesday morning local time, an extraordinary display of diplomacy that reflects an unprecedented gamble for two unpredictable leaders intent on making their mark on history.

North Korea’s state newspaper accused the US of “hatching a criminal plot to unleash a war against the DPRK” while “having a dialogue with a smile on its face” Sunday following a report on South Korean radio that American forces in Japan were running drills aimed at invading Pyongyang.

“We can not but take a serious note of the double-dealing attitudes of the US as it is busy staging secret drills involving man-killing special units while having a dialogue with a smile on its face,” the commentary from North Korea’s Rodong Sinmun said, citing South Korean reports that US special units had been flown to the Philippines as part of an invasion drill.

“The US would be sadly mistaken if it thinks that it can browbeat someone through trite ‘gunboat diplomacy’ which it used to employ as an almighty weapon in the past and attain its sinister intention,” it added.

US Forces Japan (USFJ) told CNN on Monday it was “not aware of the drills” mentioned in North and South Korean media reports.

“In general, US aircrafts and ships operate from Japan every day in support of our commitments to our allies and partners in the region and in the interests of regional peace and security,” Col. John Hutcheson, the Director of public affairs of USFJ, said in a statement.

The harsh rhetoric from Pyongyang comes just days after President Donald Trump nixed plans for Secretary of State Mike Pompeo to make what would have been his fourth visit to North Korea, citing insufficient progress on the issue of denuclearization.

“I have asked Secretary of State Mike Pompeo not to go to North Korea, at this time, because I feel we are not making sufficient progress with respect to the denuclearization of the Korean Peninsula,” Trump tweeted on Friday. “Secretary Pompeo looks forward to going to North Korea in the near future, most likely after our Trading relationship with China is resolved.”

A diplomatic source told CNN that while it is possible that high-ranking officials in Seoul were informed of Trump’s decision to cancel the trip prior to the tweets, the announcement caught South Korean diplomats at the working level off guard. South Korean President Moon Jae-in plans to visit Pyongyang next month for a third summit with North Korean leader Kim Jong Un.

The South Korean Foreign Ministry said Foreign Minister Kang Kyung-hwa and Pompeo spoke by telephone Saturday to discuss the canceled trip and where negotiations might go from here.

A statement released by the ministry said Pompeo explained “in detail” the reasons for postponing the trip. The statement did not elaborate.

According to the South Korean Foreign Ministry, Kang called the cancellation “regrettable” while Pompeo reaffirmed the US position that it will continue to solidify South Korea-US cooperation.