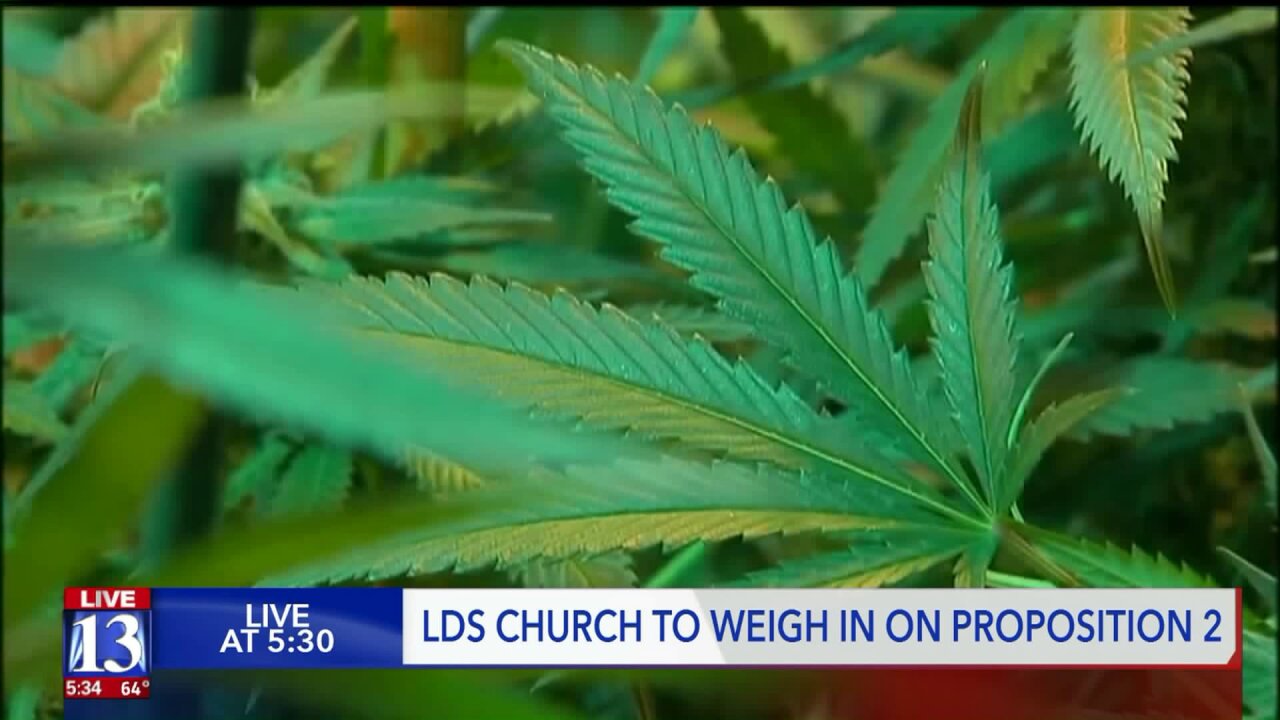 SALT LAKE CITY -- The Church of Jesus Christ of Latter-day Saints is apparently jumping into the campaign against Proposition 2.

Representatives of the LDS Church will be at an event Thursday being put on by Drug Safe Utah, one of the leading opponents of the medical marijuana ballot initiative. A church spokesman confirmed to FOX 13 their participation in the event, but declined to provide further details.

Representatives from Drug Safe Utah said the Church would speak for itself at the event. The group is made up of a number of organizations, including the Utah Medical Association, the Utah Eagle Forum, and the Utah Narcotics Officers Association.

The LDS Church formally joining the opposition against medical cannabis could impact the campaign for and against Prop. 2 as it heads to the November ballot. As the dominant faith in the state, it could sway voters and whittle away at the popularity that medical marijuana has enjoyed in the polls -- even among active church members.

"The Church has often spoken on things, but the other suggestion they hand out is the members should study the issues and think for themselves and vote according to their own conscience," said Robert Hunter, the director of the Olene Walker Institute of Politics at Weber State University.

Hunter said the LDS Church's outsized influence in Utah is not new, and he wondered how much a public statement opposing Prop. 2 would have on an issue where voters may have already made up their minds.

"I doubt if the dent will be much larger than it already is," he said.

The Utah Patients Coalition, which is sponsoring Prop. 2, certainly hopes that is the case. In a statement to FOX 13, the group's director, DJ Schanz, called for a public debate.

"Public policy is best made transparently in the light of day. For those looking to undermine the will of the voters by circumventing democratic processes with continued political parlor tricks we would ask, come to the public arena and make your case in the public square, not in smoke filled rooms at the Governor’s office or behind closed doors at the Church Office Building," he said. "The citizens of Utah have had a robust debate the last four years and are ready to stand with medical patients in November."

FOX 13 reported earlier this week that a member of the LDS Church's Public Affairs Committee was among a coalition of people who met with Governor Gary Herbert to ask him to direct state agencies to publicly oppose Prop. 2, and for him to possibly call the Utah State Legislature into special session to pre-empt the initiative, but the governor refused. Jim Jardine told FOX 13 he was not there in any capacity representing the LDS Church, but as a member of Drug Safe Utah.

Gov. Herbert on Wednesday reiterated that while he personally opposes the initiative, he believes voters should decide it.

Churches are allowed to weigh in on political issues, but cannot weigh in on candidates without jeopardizing their tax-exempt status. Earlier this week, the Catholic Diocese of Salt Lake City urged support for Proposition 3, which is Medicaid expansion.