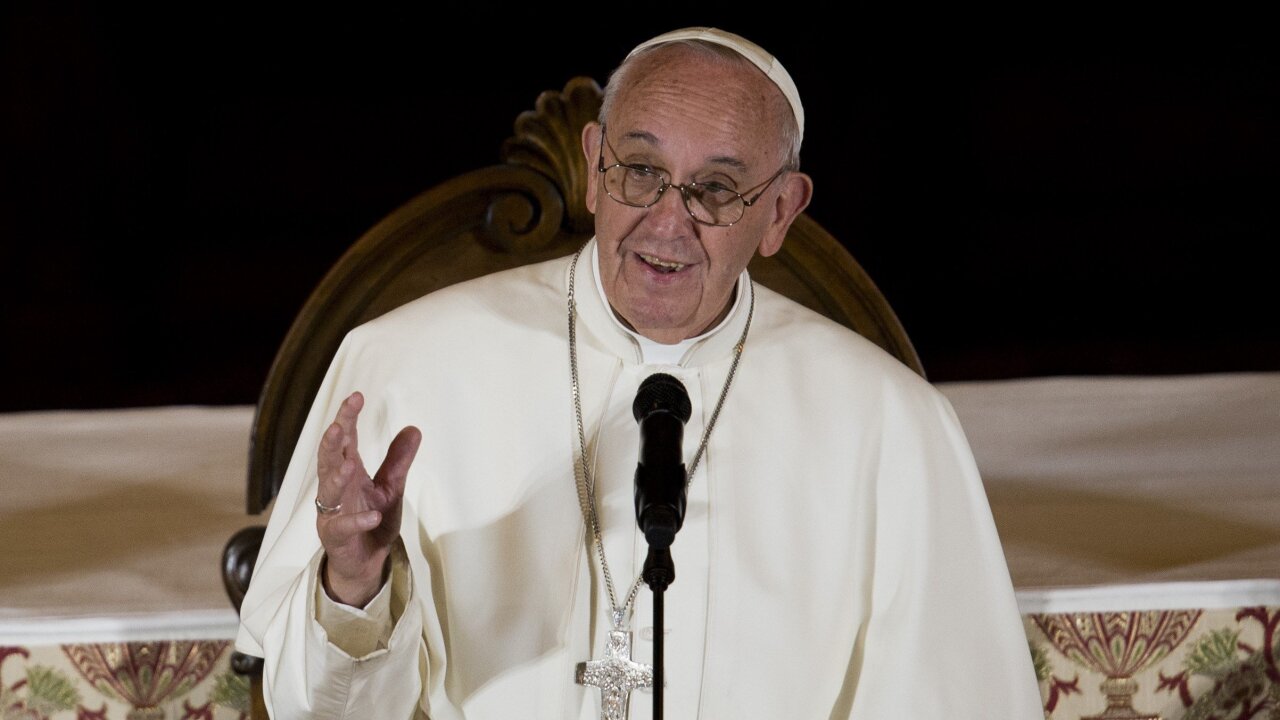 A grand jury’s report on sexual abuse by hundreds of Catholic priests in Pennsylvania is expected to be released later Tuesday. CREDIT: Andrew Caballero-Reynolds/AFP/Getty Images

(CNN) — A new grand jury report says that internal documents from six Catholic dioceses in Pennsylvania show that more than 300 “predator priests” have been credibly accused of sexually abusing more than 1,000 child victims.

“We believe that the real number of children whose records were lost or who were afraid ever to come forward is in the thousands,” the grand jury report says.

“Priests were raping little boys and girls, and the men of God who were responsible for them not only did nothing; they hid it all. For decades. Monsignors, auxiliary bishops, bishops, archbishops, cardinals have mostly been protected; many, including some named in this report, have been promoted. Until that changes, we think it is too early to close the book on the Catholic Church sex scandal.”

The lengthy report, released Tuesday afternoon, investigates clergy sexual abuse in six dioceses dating back to 1947. Pennsylvania’s two other dioceses, Philadelphia and Altoona-Johnstown, were the subjects of earlier grand jury reports, which found similarly damaging information about clergy and bishops in those dioceses.

“There have been other reports about child sex abuse within the Catholic Church. But never on this scale,” the grand jurors wrote in Tuesday’s report.

“For many of us, those earlier stories happened someplace else, someplace away. Now we know the truth: it happened everywhere.”

The grand jurors said that “almost every instance of abuse we found is too old to be prosecuted.” But charges have been filed against two priests, one in Erie diocese and another in Greensburg diocese, who have been accused of abusing minors.

“We learned of these abusers directly from their dioceses — which we hope is a sign that the church is finally changing its ways,” the grand jurors said. “And there may be more indictments in the future; investigation continues.”

At a news conference announcing the report’s release, Pennsylvania Attorney General Josh Shapiro called it the “largest, most comprehensive report into child sexual abuse within the Catholic Church ever produced in the United States.”

At times, the lengthy catalog of clergy sexual abuses in the report is difficult to read. As the grand jurors note, priests and other Catholic leaders victimized boys and girls, teens and pre-pubescent children.

Some victims were plied with alcohol and groped or molested, the report says. Others were orally, vaginally or anally raped, according to the grand jurors.

“But all of them were brushed aside, in every part of the state, by church leaders who preferred to protect the abusers and their institution above all.”

Among the more egregious cases, the grand jury reports that:

• In the Greensburg diocese, a priest impregnated a 17-year-old, forged a pastor’s signature on a marriage certificate and divorced the girl months later. According to the grand jury, the priest was allowed to stay in ministry by finding a “benevolent bishop.”

• Another priest in Greensburg groomed middle-school students for sex, according to the grand jury, by telling them that Mary had to “bite off the cord” and “lick” Jesus clean after the Nativity.

• In Harrisburg, a priest abused five sisters from the same family and collected samples of their urine, pubic hair and menstrual blood.

• Also in Harrisburg, a priest raped a 7-year-old girl who was in the hospital after her tonsils were removed, according to the report.

• In Pittsburgh, church officials said that a 15-year-old boy “pursued” and “literally seduced” a priest. A church report later acknowledged that the priest had admitted to “sado-masochistic” activities with several boys.

• In the Allentown diocese, a priest admitted sexually molesting a boy and pleaded for help, according to documents, but was left in ministry for several more years.

• Also in Allentown, a priest who had abused several boys, according to the grand jury, was given a recommendation to work at Disney World.

Tuesday’s news conference began with a short video of three victims who told how they were abused and how it changed their lives.

An 83-year-old man said he couldn’t show any affection to his wife and children as a result of the abuse he suffered. A woman said the abuse started when she was 18 months old. Another man said, “When you have the priest touching you every day, that’s a hard memory to have. The first erection that you have is at the hands of a priest.”

The victims said this was “not a vendetta against the church” and that abusers have “to be accountable in the church for what they did.”

The grand jury’s searing report comes as the Catholic Church, including Pope Francis, is struggling to contain a sexual abuse scandal rapidly consuming the church on several continents.

In Australia, a bishop has been found guilty of covering up sexual abuse. In Chile, the Pope was forced to recant his dismissal of an abuse scandal involving a prominent priest and bishops accused of covering up his crimes.

And in the United States, a prominent archbishop was removed from the powerful College of Cardinals following reports that he had molested a teenage altar boy and several others while he was rising through the church’s ranks. Meanwhile, bishops in Boston and Nebraska are investigating possible cases of sexual abuse in Catholic seminaries.

“The report of the Pennsylvania grand jury again illustrates the pain of those who have been victims of the crime of sexual abuse by individual members of our clergy, and by those who shielded abusers and so facilitated an evil that continued for years or even decades,” Cardinal Daniel DiNardo, president of the U.S. Conference of Catholic Bishops and Bishop Timothy L. Doherty, chair of the bishops’ Committee for the Protection of Children and Young People, said in a statement.

“As a body of bishops, we are shamed by and sorry for the sins and omissions by Catholic priests and Catholic bishops.”

DiNardo and Doherty noted that the grand jury’s report spans 70 years, and many of the abuse accusations were made before 2002, when the bishops adopted new policies. The policies, known as the Dallas Charter, after the city in which they were adopted, have been revised in 2011 and 2018. The charter, the bishops said, “commits us to respond promptly and compassionately to victims, report the abuse of minors, remove offenders and take ongoing action to prevent abuse.”

For weeks, many Catholics in the United States had been warily waiting for the Pennsylvania grand jury’s report, especially as bishops in the state began publicly releasing the names of accused clergy in an apparent attempt to preempt some of the report’s findings.

In a statement on Monday before the report was published, Cardinal Donald Wuerl, the former Bishop of Pittsburgh who now heads the Archdiocese of Washington, said the report “will be a reminder of the grave failings that the church must acknowledge and for which it must seek forgiveness.”

“We are now in the midst of a new era where our communal bonds of trust are once again being tested by the sin of abuse.”

Court action had delayed the report’s publication. A number of individuals named in the report claimed that its findings were false or misleading, that they were denied due process of law and that its release would impair their reputations.

On July 27, the Pennsylvania Supreme Court ordered the grand jury report to be released by 2 p.m. August 14 with redactions in sections where litigation was ongoing.

State Attorney General Josh Shapiro had written to Pope Francis on July 25, requesting that the Pontiff direct church leaders to stop “efforts to silence the survivors.”

“A comprehensive investigation by the Office of Attorney General found widespread sexual abuse of children and a systematic coverup by leaders of the Catholic Church,” Shapiro said in his letter. “Last month I planned to release the findings of our investigation. As I prepared to do so, anonymous petitioners implicated in this report went to court to stop me and silence the victims …”

“Our fear throughout this process has been that the entire grand jury report would be shelved and victims’ truth would be silenced,” Shapiro said. “Today’s order ensures that will not be the case — the redacted report on widespread sexual abuse and cover up within the Catholic Church will be released.”

“I will continue to fight to ensure every single victim is heard and every priest, bishop and church official is held accountable for their abhorrent conduct. No one victim’s truth is any less important than another and no one’s criminal conduct any less loathsome.”

On August 1, the leader of one of the largest Roman Catholic dioceses in Pennsylvania released a list identifying 71 priests, deacons and seminarians accused of “substantiated” sexual misconduct over the past seven decades.

Bishop Ronald Gainer of the Harrisburg Diocese also issued an apology on behalf of the religious community.

“That conduct has left a legacy of pain and sorrow that is still being felt,” he wrote. “I apologize for these actions.”

The list did not say how the diocese handled most of the accusations and did not give the men’s current whereabouts, though a few cases that were forwarded to civil authorities were more detailed.

A long series of abuse allegations have rocked the world’s 1.2 billion Catholics since the scope of systemic abuse and cover-ups began emerging in 2002.

In July, Pope Francis accepted the resignation of Archbishop Theodore McCarrick from the College of Cardinals, one of the church’s most powerful bodies, amid allegations of molestation and sexual misconduct. McCarrick, 88, had been a popular and politically influential leader in Washington. He maintained his innocence in June against some claims and has been unavailable to comment on others.

The sexual abuse accusations against McCarrick reveal a “grievous moral failure” within the Catholic Church, the president of the US Conference of Catholic Bishops said July 31.

“Our Church is suffering from a crisis of sexual morality,” Daniel DiNardo said. “The way forward must involve learning from past sins.”