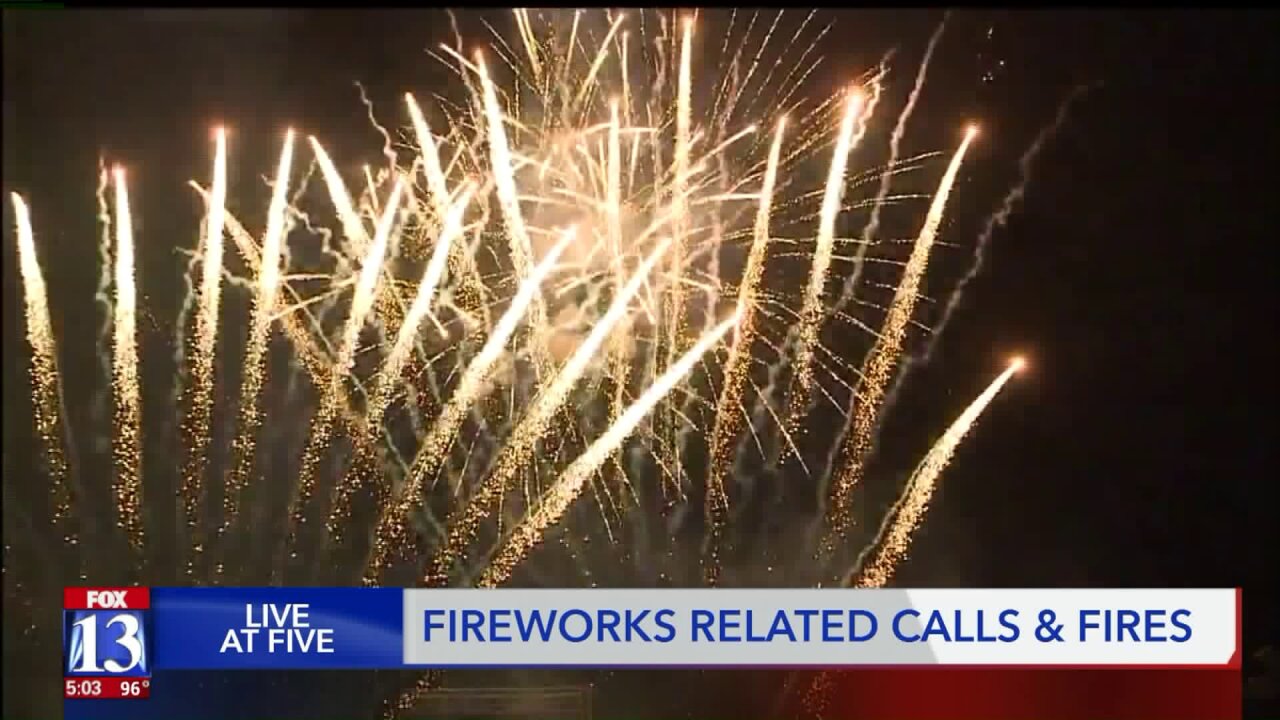 SALT LAKE CITY -- With Pioneer Day in our rear view mirror, we wanted to know how many fireworks related fires sparked during the holiday in Salt Lake County.

"That’s a pretty decent night especially given that it’s a holiday. That include all of our first responses whether it be heat exhaustion or someone has had a heart attack or some kind of a fall," said Sorensen.

Out of those 106 calls, 41 were fireworks related.

"That could be anything from 'I think there might be a fire' to illegally lighting off fireworks, but that’s actually a big improvement from the 4th of July as well," said Sorensen.

The Salt Lake City Fire Department responded to two blazes, the Ensign Peak fire and a dumpster fire near a restaurant, but they've determined neither of those were fireworks related. However, for Unified Fire, which covers 13 cities and all of unincorporated Salt Lake County, it was a different story according to Unified Fire spokesman, Matthew McFarland.

"The numbers that we have for yesterday (Tuesday) far exceed the average number of fire related responses that we would have over the multi-month average response numbers by greater than 30 percent," said McFarland.

Unified Fire responded to 34 fires on Pioneer Day and while the causes are still being determined, a lot of them were grass and dumpster fires.

"When you're looking at a holiday like the 4th or 24th and you have dumpster fires coming in at a much higher rate than normal, I hear un-extinguished fireworks," said McFarland.

However, Unified also felt like Pioneer Day was an improvement compared to the 4th.

"Our numbers were down. For us, I like to think that’s public outreach right. We’ve educated the public. People were more careful," said McFarland.

Wednesday is the last night that you can light off fireworks until New Year's in December.

"If you have fireworks that are laying around and you plan on enjoying them tonight please still act responsibly. Have that bucket of water there. Make sure your kids and pets are all a safe distance away," said McFarland.

If you plan on lighting off some sparklers, do some research and make sure you're doing it in an area that isn't prone to fires.

"There’s been areas that our fire officials, our prevention staff and fire investigators have all gotten together and dictated a high-risk area for reasons that are not always obvious to the public," McFarland said.

McFarland said a lot of those areas are not areas you would necessarily consider. For instance, you could live in the middle of the valley, but still be in a fire prone area. To get a look at your area and see all of the fireworks restrictions on an interactive map, visit unifiedfire.org.