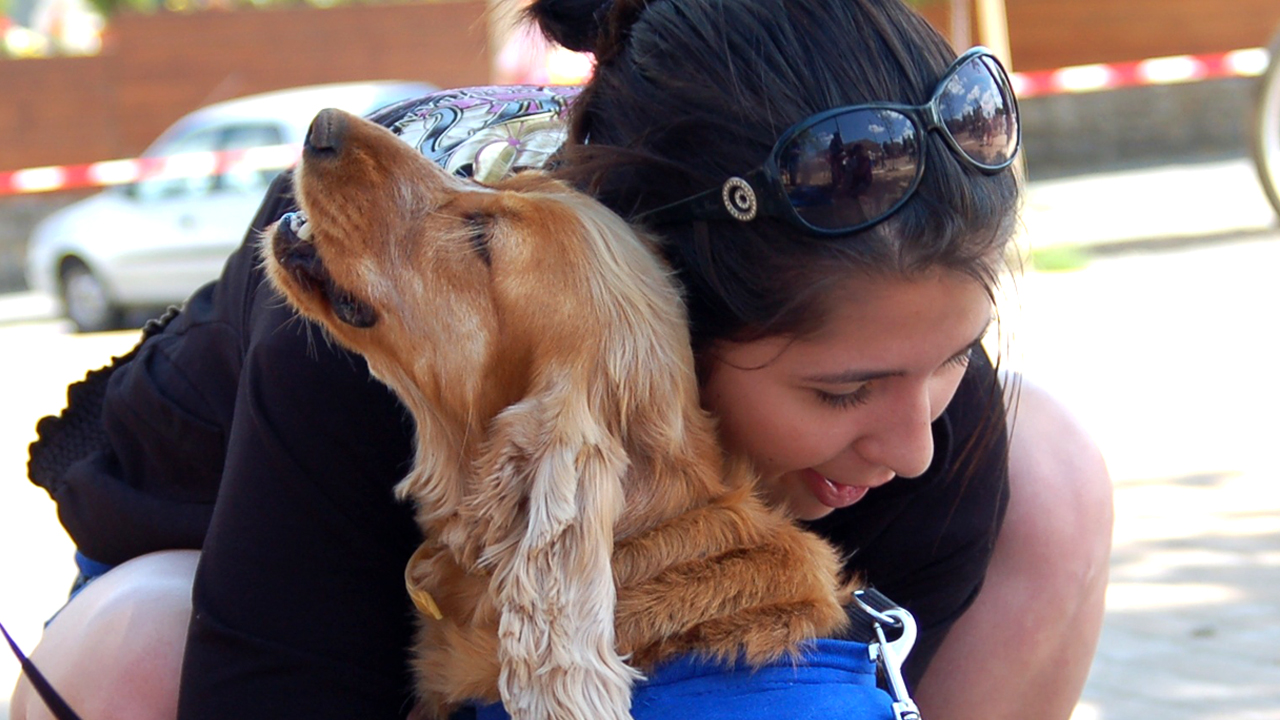 Ever notice your dog approach you when you cry? Or see how Fido might walk up to a stranger in tears?

A new study suggests that dogs not only notice when someone is upset and needs help, they also might move more quickly to assist.

The research, published in the journal Learning & Behavior on Tuesday, showed how dogs moved faster, on average, to open a door to reach their owners when the person made crying noises than when he or she hummed the tune “Twinkle, Twinkle Little Star.”

The study was relatively small, involving only 34 dogs and their owners, and of course there is no way to determine exactly what the dogs were thinking or what their motives were.

Yet the findings could help pave the way for better evaluating what influences canines, especially service dogs, to help their human companions in times of need.

“It’s really cool for us to know that dogs are so sensitive to human emotional states,” said Emily Sanford, a graduate student in psychological and brain sciences at Johns Hopkins University who was a co-author of the study.

“It is interesting to think that all these anecdotes of dogs rescuing humans, they could be grounded in truth, and this study is a step toward understanding how those kinds of mechanisms work,” she said.

When dogs offer a helping paw

For the study, the owners and their dogs — of various breeds, sizes and ages — were separated into two groups.

The dog was placed in a rectangular room that was adjacent to a small square room where its owner was sitting behind a door, appearing trapped. The dog could see and hear its owner through clear Plexiglas in the door.

The door was attached to a door frame by three magnets, making it easy for a dog to swing the door open with its nose or paw.

The researchers found that while a similar number of dogs in both groups opened the door — nine in the humming group and seven in the crying group — there was a significant difference in how quickly.

There was no significant difference in how the dogs responded based on age or breed or whether the animal was a therapy dog. Nearly half of the dogs in the study, 16, were nationally certified therapy dogs.

“While we don’t know for sure whether other factors motivated the opening, what we can say is that dogs in the crying condition opened much more quickly than dogs in the humming condition, which suggests that they are taking an action when their owner is in distress,” said Julia Meyers-Manor, an assistant professor of psychology at Ripon College in Wisconsin, who was senior author of the study.

Manor, whose research focuses on cognitive and emotional abilities in rats and dogs, said the finding seems to indicate the dog’s attempt to help.

“The idea is that if you can perceive someone else being in distress but it doesn’t overwhelmingly stress you personally, then you’re more likely to be able to provide help,” Sanford said.

“That explanation fits really nicely with our evidence that the less-stressed dogs were helpers, the really stressed dogs were not helpers, and there was no similar pattern of stress and opening in the control condition,” she said. “It makes us think that there was actually an empathetic response.”

The study’s methodology was modeled after an experiment in which lab rats tended to open a plastic restrainer containing their companion rat more frequently and more quickly than when the restrainers contained a stuffed rat or was empty. The rats freed their companions even when social contact was prevented.

When freeing their companion was pitted against accessing chocolate in a second restrainer, the rats would open both restrainers and typically shared the chocolate, according to that study, published in the journal Science in 2011.

It was unknown whether the trapped rats were distressed, however, whereas in the new study, the dogs’ owners could mimic signs of distress by crying.

What more Rover research could tell us

The new study had some limitations, including its small size and that some owners were better at fake crying than others.

Also, “our heart rate data wasn’t the best because of the length of the opening was only about 20 seconds, and the data becomes a bit unreliable at such short intervals. We have to be a bit cautious with those conclusions as a result,” Manor said.

“The other limitation is that half the dogs in the humming condition opened [the door], as well. It is likely that some of the opening is just from dogs wanting to be with their owners,” she said.

Overall, “I think this study is important because it helps to show us how dogs might respond in an emergency situation,” Manor said. “It also continues to build support for the attentiveness and concern that dogs show for human emotional states. That gives us a better understanding of both dogs and empathy.”

The study serves as an “interesting first step” into what makes some dogs rush to help in a situation while others don’t, said Angie Johnston, a lecturer in psychology at Yale University in Connecticut.

“What’s most important about this article is they examine how the dogs’ anxiety state influenced whether they helped or not,” said Johnston, who conducts research with adults, children, and domestic and wild canines but who was not involved in the new study.

“The thing that’s especially interesting is that lines up with previous research with humans, showing that humans are also more likely to help if they’re not as stressed out by the situation,” she said. “So it seems like in this way, dogs may be similar to humans.”

Still, more research is needed to determine whether the study findings are a true representation of empathy in dogs.

“A lot more work is going to be needed. For instance, this study used a method where dogs were either in the condition where the guardian hummed ‘Twinkle, Twinkle, Little Star’ or they were in the condition where the owner made distressed noises, but it would be really interesting to look, across dogs, at how in one particular dog at a time, how the context affects how much they help,” Johnston said, such as if the same dogs went through both groups of humming or crying and whether their responses would differ in each scenario.

“It would be really useful to know down the line what could we as humans do to get the effective helpful responses from dogs,” she said.

More research is also needed to determine that the dogs’ responses were not to stop their owner from making crying sounds rather than to help their owner, Johnston pointed out.

“I’d like to see some follow-up research that makes sure dogs were responding to the human’s negative emotional state, indicated by distressed noises, rather than simply responding to any sort of unpleasant sound,” she said.

Aaron McDonald, a canine behaviorist based in Birmingham, Alabama, has seen cases of what appear to be dogs experiencing and exhibiting empathy with humans.

“I currently have a client who just yesterday reported such a behavior in her dog, Isis. Her toddler has a tendency to climb and tumble. As a response, the dog now stands behind her to brace her fall. The owner gave no such instruction. What emotion drives that innovation, if not feelings of empathy? Empathy is found at the heart of social attachment,” said McDonald, who was not involved in the new study.

After all, dogs tend to pay close attention to their owners.

“They record every rhythm and interval of their behavior, the order in which they move from room to room, how long it takes them to dry their hair in the morning and the sound and rhythm of their footsteps,” McDonald said.

“They also record all of our facial affectations, our speech patterns, and memorize all of our cognitive blind spots — when and where we don’t pay attention,” he said. “Dogs profile humans much like an FBI investigator might document the lifestyle of a suspect. Dogs record and memorize every nuance of their human caregivers’ lifestyle.”