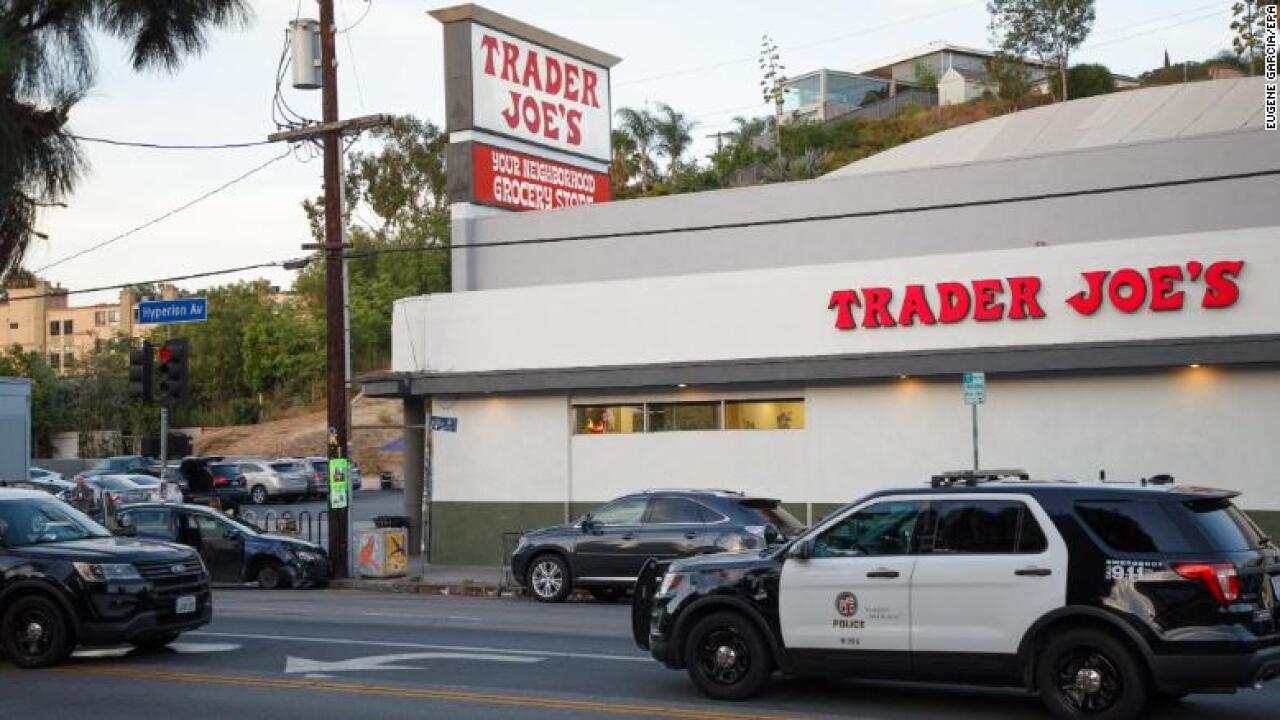 epa06903638 Police investigate the aftermath of a hostage situation at the Trader Joes grocery store in the Silver Lake neighborhood of Los Angeles, California, USA, 21 July 2018. A gunman crashed his car into the utility pole outside the store before surrendering to authorities. One person was killed in the store during a gun battle with police that started earlier in the day with a domestic dispute. EPA/EUGENE GARCIA

LOS ANGELES – A Trader Joe’s employee is dead and a wounded suspect is in custody after a standoff in Los Angeles stretched through several tense hours Saturday before the suspect surrendered.

About 40 people were inside the grocery store on Hyperion Avenue, in LA’s Silver Lake neighborhood, when an armed man ran in, according to police. He had crashed the car he was driving nearby after firing multiple rounds at officers pursuing him, police said.

The man was running from police after a shooting in which an elderly woman and a young woman were victims, LAPD Officer Mike Lopez told CNN. Their conditions were not given.

Police said the older woman was the suspect’s grandmother, and it was the grandmother’s car he was driving when he wrecked near the Trader Joe’s.

Some customers immediately ran out of the store when the armed man burst in, and police surrounded the building. Over the course of the three-hour standoff, several people walked out of the store with their hands up. Some employees climbed out a back window on a chain ladder.

Mayor Eric Garcetti later told a news conference that a woman inside Trader Joe’s had been killed. He did not identify her or say how she died. The suspect was wounded in his left arm after exchanging shots with police, Garcetti told reporters after the standoff had ended.

After talking with hostage negotiators, the man, 28, eventually handcuffed himself and surrendered, police said.

The woman killed was Melyda Corado, according to her brother, Albert Corado. He said Melyda Corado had worked at Trader Joe’s for four to five years.

“She was the person I loved the most in the world. She was never anyone but herself for better or worse, she was herself,” Albert Corado said.

Public safety agencies had responded in force to the standoff, with an armored police vehicle parked outside the store and several ambulances and dozens of law enforcement vehicles arriving on the scene.

The LA Fire Department said six people ranging from ages 12 to 81 were taken to the hospital following the incident. All were in fair condition with no life-threatening injuries, spokeswoman Margaret Stewart said.

The injured included a 20-year-old woman who was removed from a vehicle, not the inside of the store, Stewart said. It was not immediately known whether that woman was the one from the original shooting.

Police Chief Michael Moore earlier said the man shot his grandmother seven times and she had undergone a series of surgeries at a local hospital.

Don Kohles, 91, told CNN he saw the car crash into a fire hydrant or a utility pole in front of the Trader Joe’s.

“Then this guy comes out of the car and starts running toward TJs,” Kohles said, referring to the grocery store. “I look behind me and there were two police guys coming with heavy guns, then boom boom boom boom, so I go into TJ’s and I see this guy and he comes in.

“We all laid there for about a half an hour until LAPD came and got us out. They helped carry me across the parking lot and they sort of tossed me over a wall,” Kohles said.

Witness Devin Field said it appeared traffic prevented the suspect from escaping police when he crashed in front of the store.

The suspect had a pistol in his hand and “just started opening fire on the police behind him,” Field said. When police returned fire, Field and others got down on the ground, he said.

“After he was inside the store for a little while they had me crawl away from the scene and run away around the corner,” Field said.

“He was very focused in getting out of the cops’ vision,” witness Miguel Trujillo said. “The exchange of bullets were all in an instant.”