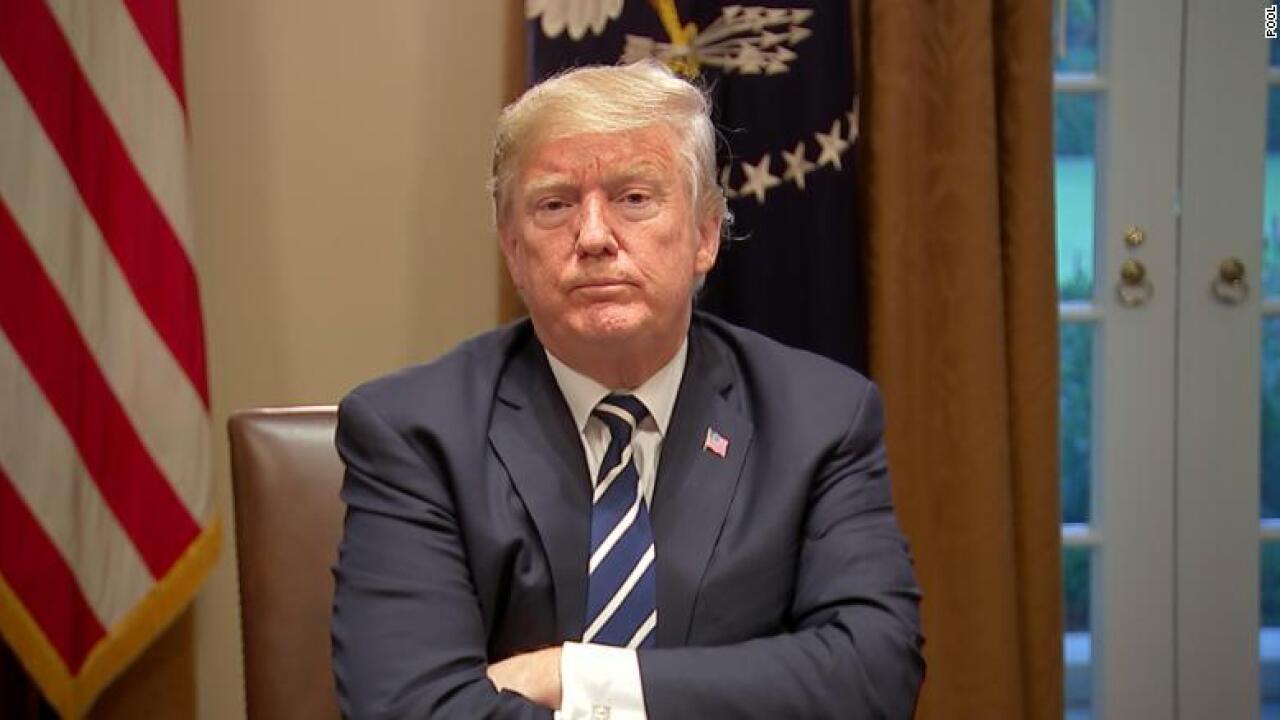 WASHINGTON — President Donald Trump, facing an onslaught of bipartisan fury over his glowing remarks about Vladimir Putin, said more than 24 hours afterward that he had misspoken during his news conference with the autocratic Russian leader.

In one of the only times of his presidency he’s admitted to a mistake, Trump said that when he returned Monday from the summit with Putin in Helsinki, Finland, he “realized there is some need for clarification” about his remarks on Russian interference in the 2016 US election.

“In a key sentence in my remarks, I said the word ‘would’ instead of ‘wouldn’t,’ ” the President said Tuesday. He explained he had reviewed a transcript and video of his remarks.

“The sentence should have been: ‘I don’t see any reason why it wouldn’t be Russia,’ ” he said. “Sort of a double negative.”

During Monday’s news conference, Trump said, “I don’t see any reason why it would be” Russia that interfered in the election.

The admission came in the White House Cabinet Room, where Trump was sitting with lawmakers for an otherwise unrelated meeting. Reading prepared remarks to reporters, the President reiterated that there had been no collusion between his campaign and Russia and that the country’s efforts had no impact on the final election results.

And he voiced support for US intelligence agencies — a day after he had refused to accept their findings on Russia’s election interference over Putin’s denials — and vowed to take action to prevent further attacks.

“I accept our intelligence community’s conclusion that Russia’s meddling in the 2016 election took place,” Trump said. But diverting from his typewritten notes, the President added: “It could be other people also. A lot of people out there.”

It was an attempt at clarification that came after uproarious anger at Trump’s performance in Helsinki. Even many members of the President’s own party rebuked his statements from nearly the moment he departed the Finnish capital. Yet it took more than a day for him or the White House to offer any official walk-back.

A scramble had ensued in the West Wing after Trump’s remarks Monday. It was the President himself who determined in a meeting that he wanted to say he had misspoken, according to officials familiar with the matter, who said Trump led the crafting of the clarification that unfolded Tuesday afternoon.

The officials said it became clear early Tuesday that initial discussions of clarifying his remarks on Twitter would not prove sufficient, as Trump was hearing from more and more people through phone calls and messages that he had to say something.

The President spoke to key lawmakers and outside confidants leading up to his remarks, people familiar with the matter said. One driving factor in the clarification, the officials said, was a fear of resignations in the intelligence community — possibly Director of National Intelligence Dan Coats or others — and a sense that Trump’s Monday news conference “looked unpatriotic.”

Vice President Mike Pence — who a day earlier had praised Trump’s performance in Helsinki — was closely involved in fielding outside criticism and trying to keep Republican members of Congress measured in their responses, an official said.

Top national security officials — including Pence, Secretary of State Mike Pompeo and national security adviser John Bolton — huddled in the Oval Office Tuesday to develop a response to the fallout. Chief of staff John Kelly and adviser Stephen Miller were also involved in that conversation. Officials held multiple other meetings in the West Wing throughout the day, but not all involved the President.

Those officials, led by Pence and Pompeo, helped sway the President to make his statement.

Trump still believes the criticism is being blown out of proportion, one official said, and he plans to try to turn the attacks onto the press once again.

But his attempt at cleanup fell flat to some in the West Wing. Bringing up “no collusion” and saying there “could be other people also” responsible for election interference in addition to Russia is viewed as another mistake, the official said.

“He is consumed with talk of no collusion,” another official said, saying Trump had repeated it all day and “thinks it’s the answer to everything.”

Indeed, when the President was presented with a typewritten script to read before reporters on Tuesday, he made some of his own additions: Scrawled in black marker were the words “THERE WAS NO COLUSION” — with the final word missing an L.

As Trump read his statement, aides in the back of the room read along, following the President’s words on their own copies of his script. The appearance was not without farce. As Trump was declaring his “full faith and support” for US intelligence agencies, the lights in the Cabinet Room went dark.

“That must be the intelligence agencies,” he quipped. The lighting was quickly restored.

Earlier Tuesday, the President had offered a defiant rebuke of his critics, writing on Twitter: “While I had a great meeting with NATO, raising vast amounts of money, I had an even better meeting with Vladimir Putin of Russia.”

“Sadly, it is not being reported that way – the Fake News is going Crazy!” he proclaimed.

Trump’s self-defense, however, was unlikely to quell the uproar caused by Monday’s news conference.

The conservative editorial page of The Wall Street Journal declared the news conference “a personal and national embarrassment” for the President, asserting he’d “projected weakness.” Newt Gingrich, ordinarily a reliable voice of support, wrote on Twitter the remarks were “the most serious mistake of his presidency.”

Members of Congress, including several powerful Republicans, distanced themselves from Trump’s remarks and aligned themselves with US intelligence estimates that Russia had interfered in the election.

Immediately after Monday’s news conference, Trump’s mood had been buoyant, people familiar with the matter said. He walked off stage in Helsinki with little inkling his remarks would cause the firestorm they did, and was instead enthusiastic about what he felt was a successful summit.

By the time he’d returned to the White House just before 10 pm ET on Monday, however, his mood had soured. Predictably, the President was upset when he saw negative coverage of the summit on television aboard Air Force One. It was clear he was getting little support, even from the usual places.

He vented to aides traveling with him, including new communications chief Bill Shine and Miller. First lady Melania Trump was also aboard and was involved in some of the discussions, the people familiar with the matter said.

Trump, the first lady, Shine and Miller were seen in animated conversation aboard Marine One when they arrived to the White House South Lawn on Monday evening.

Correction: This story has been corrected to show the meeting involving Pence, Pompeo and Trump happened in the Oval Office.