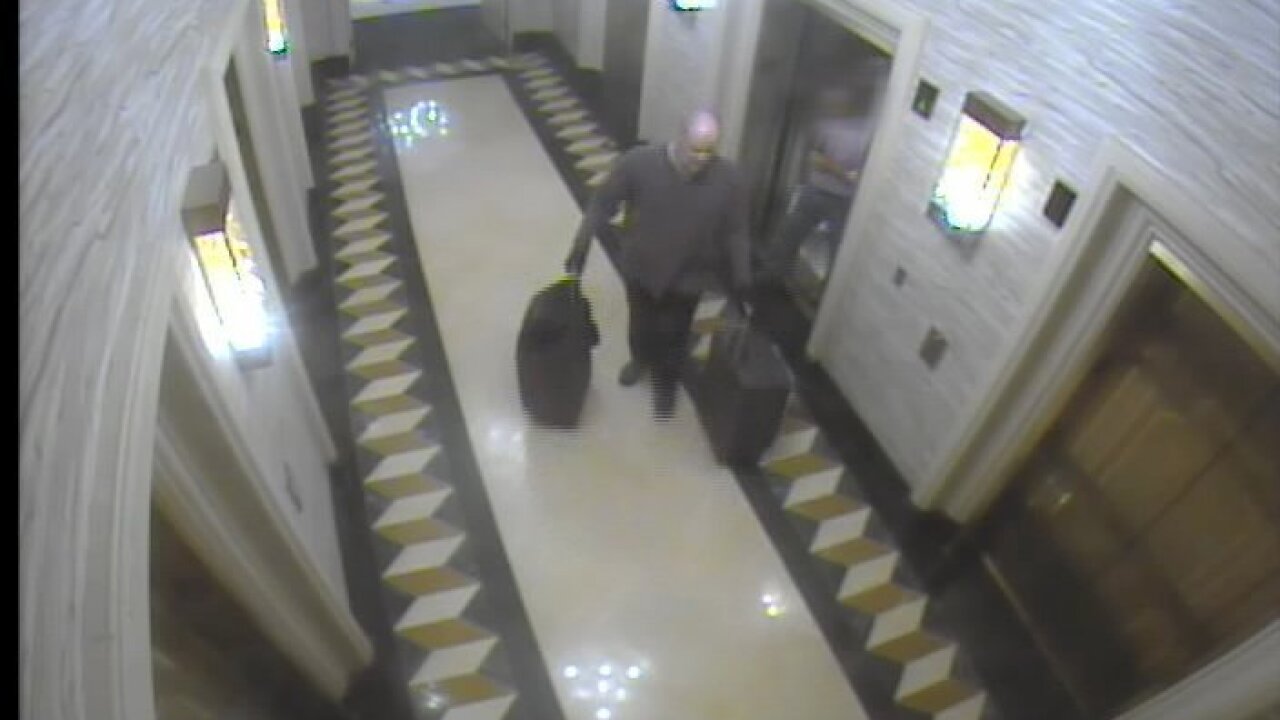 (FILE) MGM Resorts released surveillance footage of Las Vegas shooter Stephen Paddock, showing his movements at the property in the days and hours leading up to the deadly shooting. Paddock can be seen moving large amounts of luggage into the hotel prior to the shooting.

LAS VEGAS — The owner of the Mandalay Bay hotel says it bears no liability in last year’s Las Vegas concert massacre and is asking the courts to extend it federal protections that shield companies who provide anti-terrorism products and services to civilians.

MGM Resorts International, facing a barrage of lawsuits over the shooting, responded Friday by naming more than 1,000 of the shooting victims as defendants in two lawsuits of its own. The entertainment giant is not seeking monetary damages but, citing a federal law, asks the courts to protect it from legal actions filed by the victims.

In a statement to CNN, MGM Resorts called the shooting “the despicable act of one evil individual” and said its lawsuits, filed Friday in US District Courts for Nevada and Central California, are intended to benefit the victims and help them heal.

Read the Nevada lawsuit for yourself

“The Federal Court is an appropriate venue for these cases and provides those affected with the opportunity for a timely resolution,” said Debra DeShong, spokeswoman for MGM Resorts. “Years of drawn-out litigation and hearings are not in the best interest of victims, the community and those still healing.”

The October 1 shooting, which left 58 dead, hundreds injured and many more traumatized, began when a heavily armed gunman smashed windows in his Mandalay Bay suite on the 32nd floor and rained bullets down on thousands of concertgoers at the Route 91 Harvest Festival across the street. Police said the gunman, Stephen Paddock, then fatally shot himself.

MGM Resorts International is the parent company of the corporation that owns the Mandalay Bay and the Las Vegas Village, site of the festival.

MGM hired a vendor, Contemporary Services Corp., to provide security for the event. By hiring CSC, whose services the Department of Homeland Security has approved “for protecting against and responding to acts of mass injury and destruction,” MGM is claiming it is absolved from responsibility in the shooting.

Since the attack, more than 2,500 people have brought lawsuits or threatened to file lawsuits against MGM Resorts International and its subsidiaries, according to MGM.

The resort company’s lawsuits in Nevada and California name more than 1,000 such victims, many of whose lawsuits were voluntarily dismissed, apparently with the intent of refiling them later.

The company was negligent in letting Paddock into the hotel with so many weapons “and up to the 32nd floor,” Lombardo said.

CNN’s attempts Tuesday to reach MGM’s lawyers and a victims’ advocacy group were not immediately successful.

“Defendants’ actual and threatened lawsuits implicate the services provided by CSC because they implicate security at the concert, including training, emergency response, evacuation and adequacy of egress,” the lawsuits say.

That sentence is important because MGM hopes a judge will agree that a 2002 law called the Support Anti-Terrorism by Fostering Technologies Act, or SAFETY Act, shields the hotel and concert venue owner from liability, putting it instead on CSC.

Congress passed the SAFETY Act after 9/11 to encourage the private sector to deploy security technologies in civilian settings. Companies providing such products and services had been reluctant to do so for fear they’d be liable in a terrorist attack, but the 2002 law limits liability and allows companies to assert a government contractor defense for claims stemming from terrorism.

A government contract defense is most commonly but not exclusively employed among military contractors and can provide immunity from liability in some cases.

Victims’ attorneys Eglet and Lombardo argue that MGM won’t be successful in its invocation of the SAFETY Act.

“It was not designed for this,” Lombardo said.

“If MGM wanted to be certified by the SAFETY Act, they could have done that, but they didn’t,” he said.

Because the Department of Homeland Security has certified services provided by CSC, the SAFETY Act applies to the Las Vegas shooting, according to the lawsuits. In this case, MGM’s lawyers claim, the act and other regulations “make clear that any such claim against the MGM parties must be dismissed.”

“If Defendants were injured by (the) assault, as they allege, they were inevitably injured both because (the shooter) fired from his window and because they remained in the line of fire at the concert. Such claims inevitably implicate security at the concert — and may result in loss to CSC,” they say.

CSC provided security, “access control” and crowd management services for the festival. It also vetted employees, inspected venues and developed emergency response and evacuation procedures, according to the lawsuits.

Though no federal authority has declared the Las Vegas shooting a terrorist attack — in fact, investigators have yet to declare a motive for the massacre — the lawsuits say DHS officials and documents cited the shooting in emphasizing the need to prevent terrorists from hitting soft targets such as concerts and sporting events.

They also says the SAFETY Act defines terrorism as an unlawful act that causes harm to a person in the United States, using weapons designed for mass injury.

“There is no requirement in the statute or regulations of an ideological motive or objective for the attack for it to meet the requirements of the SAFETY Act,” the lawsuits say, adding that the guns, bump stocks, high-capacity magazines, incendiary rounds and explosives found in the gunman’s suite and van qualify as weapons intended to cause mass injury.